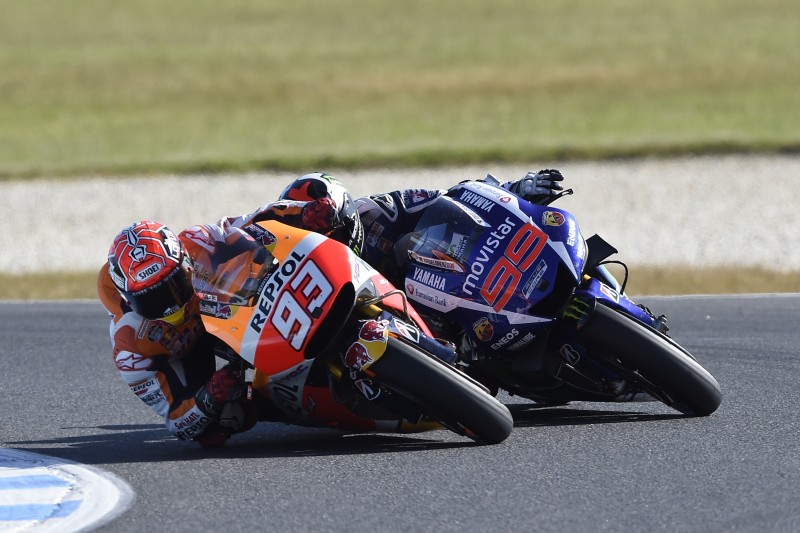 The Australian Grand Prix started with Andrea Iannone, who went into the race from second position, and Jorge Lorenzo in front. They were followed by Marquez and Pedrosa in third and fourth place. It didn’t took long until Pedrosa got past Marquez, but the reigning world champion fought back within few seconds. Behind the two Repsol Honda riders Cal Crutchlow tried to escape from Valentino Rossi, who was riding in sixth position.

Up front Lorenzo overtook Iannone several times, but with the infamous Ducati-power the italian always fought back on the straights, since Lorenzos Yamaha couldn’t keep up with the speed of the Desmosedici. The fight was interrupted by an incident for Iannone, who crashed into a seagull. With a big whole in the fairing of his Ducati, Iannone still carried on. Lorenzo made the best out of it, overtaking Iannone again, but on the upcoming straight, not only Iannone, but also Marquez overtook the current runner-up.

Just seconds later, Lorenzo went wide, opening the doors for Marquez, who was now leading, and Iannone to pass him. Behind Crutchlow passed Pedrosa, whereas Rossi desperately tried to stay with the leading group. He succeeded, overtaking Pedrosa and Crutchlow, while Lorenzo and Iannone still battled for the lead. Marquez stayed close nevertheless.
With Iannone falling back behind Marquez, Rossi took the chance and squeezed past his fellow countrymen.

The battle in the back of the leading group came in handy for Lorenzo, who managed to escape at least few tenths. Marquez tried to do the same as well, but after some hassle with Iannone, Rossi sticked to Marquez’ rear. But it wasn’t until long, when the gap from Marquez to Rossi was about one second, whereas the spaniard kept closing up on his fellow countrymen on top spot.
Just few seconds later, all hell broke lose. Marquez overtook Lorenzo, Iannone got past Rossi. The italian duo closed up on Lorenzo quickly.

After some attack from Iannone, Lorenzo somehow managed to take the lead from Marquez again. With few laps to go, an incredible fight between Marquez, Iannone and Rossi unfolded, with Iannone overtaking both Honda and Yamaha in one single move. In the last lap, Marquez defended his position against Iannone and somehow also got past Lorenzo. The reigning world champion crossed the checkered flag in first position, with Lorenzo following him. Behind them, Iannone had gotten past Rossi, who wasn’t able to fight back the Ducati rider once more. Iannone finished strong in third place, with the nine-time world champion as fourth.

Behind the leading group, Dani Pedrosa achieved a fifth place in front of Maverick Vinales on the Suzuki, who bravely fought his way up and overtook Cal Crutchlow in seventh place. The Top Ten was completed by the Espargaro brothers Pol and Aleix in eighth and ninth place. Pol’s teammate in Tech3, Bradley Smith, finished the race in tenth place.

Except for Nicky Hayden and Camian Cudlin, who replaced the injured Alex De Angelis, every rider finished the race. Hayden and Cudlin fell out of contention with 18 laps to go. Both riders remained unhurt.

The next round of MotoGP will takes place on friday, 23th of october at the Sepang International Circuit in Sepang, Malaysia. 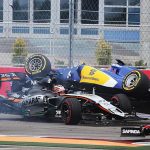 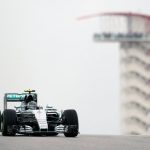