Mercedes led the way in the first two practice sessions for the 2014 British Grand Prix at Silverstone. Nico Rosberg topped the first session, with home hero Lewis Hamilton taking the top spot in FP2 before suffering a mechanic failure.

Last year’s British Grand Prix winner Nico Rosberg led the first 90 minute session of practice for this year’s event. The German edged out his team-mate by 7 tenths of a second, with 2011 winner Fernando Alonso in 3rd place for Ferrari.

Red Bull showed an improvement over their dismal Austrian Grand Prix pace by setting the 4th and 6th fastest times. Ricciardo was 2 tenths ahead of Vettel; with Kimi Raikkonen the meat in the Red Bull sandwich in 5th. Jenson Button was 7th fastest for McLaren, with Toro Rosso 8th and 9th. Button’s team-mate Magnussen completed the top 10.

The session saw 4 drivers substituting for the first session, with Giedo van der Garde and Robin Frijns returning to the cockpit after making prior appearances in the Sauber and Caterham cars. Two drivers made their Grand Prix weekend débuts, with Daniel Juncadella taking Nico Hulkenburg’s Force India. The Spanish driver had an untroubled session to finish a solid 14th place; 4 tenths down on Perez in the sister car.

The other driver to make their first appearance was Susie Wolff in the Williams of Valtteri Bottas. Susie became the first woman driver to take part in a Grand Prix weekend for 22 years. Sadly her début didn’t last very long , with Susie just completing 4 laps before her car suffered an oil pressure problem which meant that no more running could be completed. Susie will be back in the cockpit for first practice at the German Grand Prix at Hockenheim.

The second Williams was also completed little running, with Felipe Massa crashing his Williams a few minutes after Wolff’s retirement. The Brazilian got loose on the kerbing on the outside of Club corner and hit the inside barrier with all 4 corners of his car. The red flag was bought out to clear the debris, which led to two stewards inquiries for Nico Rosberg and Daniel Ricciardo for illegal overtaking under a red flag. Both weren’t penalised.

After settling for 2nd in FP1, Lewis Hamilton took the helm of the second session by setting the fastest time by 2 tenths over team-mate Rosberg. Lewis was deep into his race simulation in the last half hour of the session when he stopped the car due to a shifting problem. The home hero had just come out of the pits when he stopped the car after the turn 3 hairpin.

Nico Rosberg was able to complete his day’s running uninterrupted, but was unable to bridge the 2 tenth gap to his team-mate. Fernando Alonso was 3rd fastest once again and was only half a second down on Rosberg. Ricciardo was in 4th again, with Vettel improving to 5th place; a tenth down on his Australian team-mate.

Valterri Bottas was 6th after getting back in his car after Wolff’s brief turn in FP1. The Finn didn’t have a completely undramatic session, with the engine cover of his Martini Williams coming apart on the hanger straight in the final 10 minutes. The two McLaren’s of Button and Magnussen were 7th and 8th, with Raikkonen and Vergne in the final two top 10 positions. Vergne had also befallen problems during the session, with his left-front wheel separating from the rim as he rounded turn 1.

The Williams mechanics managed to repair Massa’s car enough to get him on track in FP2. The Brazilian got the 11th fastest time, but reported power problems as the session came to an end. Marcus Ericsson was the final driver to hit problems after pulling into the old pit-lane with bodywork issues around the engine of his Caterham. 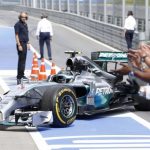