Pep Gaurdiola’s Man City side showered more misery on an Arsenal team short on confidence. Goals from Bernardo Silva, David Silva and Leroy Sané left Arsene Wenger’s Arsenal side out in the bitter cold as Man City increased their iron grip on the Premier League title.

We didn’t have too long for the first goal as Leroy Sane was able to cut through the Arsenal defence with ease before laying a ball off to Bernardo Silva who was able to fashion himself some space before placing a strike out of Petr Cech’s reach and into the bottom corner to give City the lead. Arsenal’s character would now be revealed. Would they sink or swim? Sadly, Arsenal sunk like a rock after a sublime goal finished off by David Silva. To be fair to Arsenal, it was a goal that would have cut up 99% of teams. Man City would go three-up on the 33rd minute after Arsenal found themselves dangerously short at the back which allowed Leroy Sane to put away his 8th goal of the season. It might be easy to criticise an Arsenal team with obvious problems, but this was a Man City team that was closing in on perfection. Seriously, if this Man City turned up at the Nou Camp, they’d outplay them, they were that impressive in the first half.

Early after the restart, Arsenal were awarded a penalty when Nicolás Otamendi clumsily tripped Henrik Mkhitaryan. The resulting kick was a poor one and Ederson was able to palm away the tame Aubameyang effort. In all honesty, with how this game was going, it wasn’t at all surprising that Aubameyang missed. For the most part, the 2nd half lacked quality from both sides, probably due to Arsenal not believing they could get back into the game and Man City already on the bus journey back home.

The match ended 3-0 to Man City. Arsenal blown away in the first half by a sumptuous Man City team who were able to extend their lead to 16 points over second placed Man Utd.  Arsenal were booed off after a match that has left Arsene Wenger’s team 9 points adrift of a Champions League spot.

Man City’s 1st half performance was so delicious that no Michelin star meal could taste better than what Pep’s boys were able to cook up, it was just wonderful.  In particular Leroy Sané was on top form and unplayable at times. Arsenal now look like they will fail in their bid to get a champions league place.  They weren’t overly bad, they were just outclassed by a vastly superior team. It was upsetting to see Arsene Wenger looking such a forlorn figure, as well as seeing his side booed off the pitch. If this does end up being his last season, I for one would love him to end his tenure by winning the Europa League, sending Arsenal into the Champions League and walking into the sunset with his head held high. I personally don’t think many would begrudge him of that. 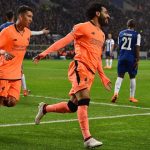