Garnier Grafic, a dynamic brand with a strong appeal in the world of hair styling, wanted to engage its target in an original and memorable way.

To achieve this goal, RTR has promoted the partnership between Grafic and the Motor Show, the most spectacular Italian event of two and four wheels. RTR has successfully matched the characteristics of a product to an event that, in terms of target and values, fits perfectly with the Garnier Grafic brand. In fact, 50% of the visitors to the Motor Show are young people aged 18 to 24, 87% of whom are male (2002 data).

Spectators were able to enjoy the turns of superbikes, the grip of rally cars and single-seaters, as well as the stunts of freestyle and great champions showing off in the arena, as well as the millions of people who rely on Grafic Garnier every day to create their styles.

Garnier named the liveliest area of ​​the entire event, the Garnier Grafic Arena, which hosted ten days of unique performances: on and off roads of the best production cars and motorcycle.

The grandstands of the Grafic Arena were constantly crowded with a warm and attentive audience, eager to attend 40 races and exhibitions, including that of the Ferrari Racing Department; over 300 drivers engaged in live  competitions, with the rally world championship Marcus Gronholm and Petter Solberg first in line. Other important appearances were those of the drivers Renato Travaglia, Edgar Torronteras and Stefano Minguzzi.

This year the Bologna event proved again its vitality, involving a total of 1,200,780 visitors, an increase of 6.5% compared to the previous edition. Numerous guests, including: Marco Melandri, Max Biaggi, Loris Capirossi, Alex Zanardi, Jarno Trulli and Giancarlo Fisichella. A unique event, able to give strong emotions to its audience and a wide visibility to the companies involved. 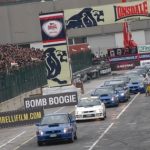