Lonsdale, a dynamic brand with a strong appeal in the world of casual clothing, wanted to reach its target in an original and memorable way.

To achieve this goal, RTR has created the collaboration between Lonsdale and the Motor Show, the most spectacular Italian event of two and four wheels. RTR has successfully matched the characteristics of a product to the event which, in terms of target and values, fits perfectly with the Lonsdale brand. 41% of the more than 1,200,000 visitors to the Motor Show are in fact young people aged 18 to 24 (2003 data)

The Racing Area of ​​the 2004 and 2005 Motor Show was customized with the Lonsdale logo and named “Lonsdale Arena” and it became the center of the most exciting motor shows. For the occasion, the company has developed a very original new logo with a graphic design that recalls the world of engines through elements capable of evoking the race tracks or a steering wheel with a 1960s design. The visibility of Lonsdale was huge: billboards at the main entrances, starting portals, light towers and backstands of the racing area were all customized with the new logo, also present on all press communications relating to sports competitions, on the third cover page of the Official Catalog and on all the maps of the exhibition center included the Catalog and the Press Information, in the section dedicated to the racing area of ​​the official website

RTR also organized and managed an event inside the VIP Area for more than 100 selected guests, who experienced the thrilled atmosphere of the Motorshow from a privileged perspective, enjoying the presence of the Lonsdale Arena godmothers Nina Moric and Carolina Marconi. Everything has been taken care of in detail: from the original catering, based on chocolates and delicacies, to the descent into the Lonsdale Arena of the two beauties, who greeted the audience of the packed stands on the occasion of the Bettega Trophy. 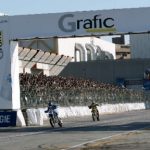 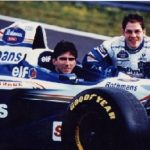