If I said that everyone loved Nicky, those who didn’t know him would think, “That’s what everyone says when someone passes away. They suddenly become a hero. Their insignificant acts are transformed into great feats. Their defects are forgotten, and their transgressions pass into the archives as if death renders them all innocent and equal overnight. It is as if dying is not the only fate that none can escape, least of all if they are used to speeding at 300 an hour.”

Well, for Nicky it wasn’t like that. Nicky was truly liked by everyone. And each had a good reason. For the ladies, one must only look at his photos to understand why the loved him. For motorcyclists, it was because he never held back and put his all into the sport. He knew to stand tall even when you lack natural talent or things don’t come so easily. Maybe, it was because he knew not only that, but also knew himself. He understood the importance of rolling up your sleeves and getting your hands dirty. He was the Bruce Springsteen mechanic that sang “I’m on fire” and drove a Ford Thunderbird

dreaming about winning over the blonde that lives in the hills: except the Kentucky Kid achieved his dreams. “Sometimes it doesn’t seem real to be compared to the Greats from the past like Spencer, Lawson, Rainey…,” he

once said, speaking with true humility. Clearly – so honest as to appear out of time – his humility was a reality.

The only exception was when he proudly defended the legitimacy of his greatest victory, the 2006 MotoGp Championship, after someone claimed that his success was due to Rossi’s fall in Valencia, by saying, “Guys, I earned this title. Remember, the track never lies.”

For journalists, it was how, between a “you kno’”, a “brother” and an “I mean”, he would recount beautiful stories of dust, the Midwest, and America. He would tell of a family that would all ride bikes together, every single member,

maybe even the goldfish from the living room. “Everything that has two wheels is made for us,” he would say. His father Earl that followed step

by step around the world and inspired him to put the number 69 on his windshield, after telling him, “It’s convenient because it can even be

read upside when you fall over.” Or when we was speaking about the Indy garden at his home and happy Laguna Seca holidays or about his happy life, of smiles and never of envy. Or when he would recount his time with Honda, “What is it like being Valentino’s teammate? Cool. Sometimes it helped with girls. They would come to my motorhome and ask me about him, so I would tell them, ‘he is here inside. Come on in and I will introduce you to him.”

For companies, it was because he was a serious and hard worker. A tireless tester and complete professional, who was always open to joining the difficult life in the garage.

He was divine like Rossi and Stoner, without ever batting an eye, driving and cooperating with a strong work ethic. No one was ever heard complaining about him. And if they did, they must have been drinking or mistaken him for someone else.

For his competitors, it was because he was fair, neither dirty nor vindictive.

The only time he was truly angry was in the 2006 MotoGP series when Pedrosa, his teammate, collided with him in Portugal and almost cost him World Championship, however he ended up securing his title in the following race. But, aside from that occasion in which even Gandhi would have been mad, Nicky still took it in his own way and once again started the only way he knew how: rolling up his sleeves, forgetting the past, and focusing on the present because the future can only be better.

For sponsors, it was because he was one of those people that they refer to as positive personalities that do not mess around, they communicate and aren’t fakes. They are a thousand faces in one: skater or actor, student or Rockstar. The types that are nice, easygoing and stay clear of drama. They are disenchanted, like the men that know themselves and life, are known to be. They are the ones that understand, in the end, it is best not to take anything too seriously. For photographers, again, it is enough to just look at his pictures to understand why they loved him.

One day, on some track somewhere around the globe, he said that he considered himself the luckiest guy in the world because he got to do what he loved most in life. “You kno’, it doesn’t happen to everyone,” he said with a smile and a wink. Then, with a fist bump, he ended the word that true men are distinguished by “Thanks, man.”

No, thank you, Nicky. See you around sooner or later.

I miss racing everyday. This is the first time since I was 8 that I haven’t started a season. When you live and breath something you love, when it’s gone there’s definitely a big void. But there’s always positives to take from these times. Right now, we all have time in the world to reflect on life, our decisions, our goals, the people we have around us, our careers.

Today, we see clearer skies all over the world, less animals being slaughtered for our pleasure simply because our demands are much lower and everyone staying in. Let’s not come back the same as we went into this tough time, let’s come out of it with better knowledge of our world, changing our personal choices and habits. Let’s come out of this as a new us, a new reinvigorated you, fitter, healthier and more focused but above all, kinder, more generous and gracious and caring for our world and the people in it. I hope we all do. 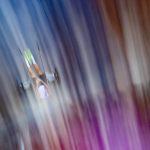