Yesterday three years ago, the MotoGP had to suffer one of it’s biggest losses of all time. Marco Simoncelli died after a crash at the Sepang International Circuit in Malaysia.

The italian with the infamous haircut was one of the most valued and most popular riders in the paddock, because of his outgoing, sociable and funny way. He was friends with lots of riders, but the strongest bond connected him with his fellow countrymen Valentino Rossi. The nine-time world champion makes sure to always remember his close friend at the San Marino Grand Prix in Misano. The “Misano World Circuit Marco Simoncelli“, as it is called now since 2012 is a pilgramage for thousands of MotoGP fans around the world to embrace their missed rider.

On this dreadful day in MotoGP history, many riders and fans remember their beloved hero, opponent and friend on social networks.

Keep smiling, SuperSic, we all miss you dearly! 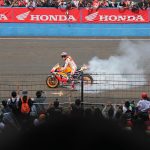 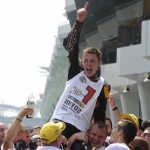