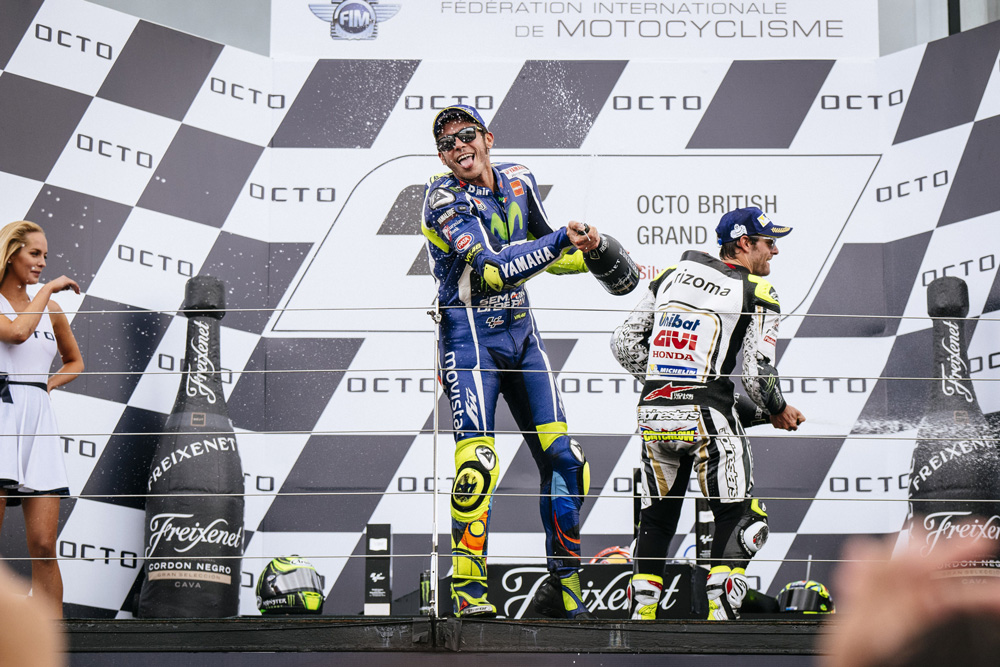 Valentino Rossi, who has been participating in the MotoGP class since its introduction in 2002, kicked off his 250th MotoGP class Grand Prix start in style. He stormed from second on the grid to grab the holeshot before tucking in behind Maverick Viñales, but his assertive start to the race was short-lived when the race was red flagged.

The opening lap to the shortened restarted race, which began at 15:54 local time, saw Rossi hold second place behind Cal Crutchlow into the first corner, but he had to let Viñales and Marc Marquez pass before the end of the first lap. With fifteen laps to go he saw the latter pull a gap on Crutchlow in third place and decided it was time to charge for the front. Within one lap the nine times World Champion passed the local rider and Marquez and focused on closing the margin of 2.4s to the race leader, but his rivals continued to threaten him from behind.

Eight laps on the Doctor came under pressure from Andrea Iannone as his rear tyre started to slide. What followed was a flurry of activity as Crutchlow and Marquez joined the fight for second place. Two laps later Rossi found himself in fifth place when he and Marquez briefly touched fairings. The Italian was quick to respond and close passes followed as they fought a heated battle, while Iannone crashed out of the race.

Rossi was unable to fend off Marquez and rode a smart end to the race, saving his tyres to seize the opportunity and take over third place when Marquez went wide. He held this podium position over the line as he rapidly approached Crutchlow in a last-lap sprint to the chequered flag, but he came just 0.583s short and wrapped up the day in third place.

Starting from ninth on the grid Lorenzo had a flying start off the line, taking seventh place into the first corner. He put his head down trying to close the gap to the front until the race was aborted due to a race incident in turn two.

He resumed his attack seamlessly during the shortened 19-lap race. Perfectly duplicating his start, he tried to progress from seventh place after the first corner, but saw Andrea Iannone put an aggressive pass on him before the end of the first lap. Lorenzo tried to follow and soon overtook Scott Redding to reclaim seventh place.

He continued his chase to the front, closing up on Dani Pedrosa and upped his pace, but lost time as he got engaged in a battle with Andrea Dovizioso for seventh place. Unable to match the pace of the Italian due to a vibrating rear tyre, he then got into battle with Aleix Espargaró, who he had to let pass. Despite the challenges, Lorenzo continued to keep his head down and later gained a position as Iannone retired from the race, to finish the race in eighth position, 19.432s from first.

Movistar Yamaha MotoGP will now travel to San Marino for the round at the Misano World Circuit Marco Simoncelli that will take place next week.