Repsol Honda’s Marc Marquez has won the 2016 MotoGP Championship with 298 points. It’s the third World Title for the Spanish rider in the first class, as he won his first ones in 2013 and 2014.  Valentino Rossi clinched second place, with a 49-point gap, while his team mate Jorge Lorenzo claimed third. It’s the 18th World Title for Honda in its history in MotoGP. 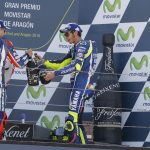 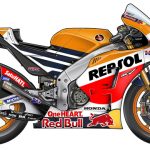