Ahead of the team’s home round in Berlin, Audi Sport ABT have announced that they will keep their current drivers Lucas di Grassi and Daniel Abt for the 2015-2016 Formula E world championship.

Di Grassi, the current championship leader, was announced to be remaining with the team a few weeks ago, with the team waiting until today to confirm that Abt too will race for them next year.

“I’m delighted and also quite proud that Lucas will be part of our team in the future,” said team principal Hans-Jürgen Abt, “We both knew what we wanted and reached an agreement immediately. The negotiations didn’t even take thirty minutes before we shook hands.

“Lucas is one of the absolute top drivers in Formula E. Of course, we know that he is hot property because of his strengths on and off the track. With this in mind, we wanted to close this issue as fast as possible.”

Di Grassi took the first ever Formula E race win back in September with the Beijing ePrix having inherited the lead at the last turn thanks to Nick Heidfeld and Nicolas Prost’s victory. Since then, he has taken 4 podiums in 6 races and holds the title lead by 4 points ahead of fellow countryman Nelson Piquet Junior.

Abt, on the other hand, has yet to secure his first victory in the series. He has however managed to secure a pole position and a podium at the Miami ePrix.

“I feel completely at home in Formula E and want to grow together with the series,” said Daniel Abt, “Formula E is going through a fantastic stage of development that includes exciting races and many cool ideas off the track. I think this series has a great future. I’m delighted to still be on board, and want to grow together with Formula E. I’m obviously very proud that I can race in the future with the team that carries our family name.”

Abt spoke in the pit-lane of the Berlin ePrix track today about the Audi Sport ABT team’s chances in the next season where teams are allowed to engineer much more of their own cars. The likelihood is that the team will be using a power-train supplied by sponsor Schaeffler – a manufacturer of automotive parts.

“We’re actually going to go testing the power-train pretty soon. Hopefully we’re going to be the Mercedes team of Formula E next year,” Abt said, referring to the dominant Mercedes Formula One team, “I think we’re really in a good position. Our guys did a very good job. Hopefully we can be the number one team next year.”

Abt will be out on track on Saturday for the Berlin ePrix event, his home race. After Berlin, Formula E will head to Moscow for the penultimate event of the season before a special double-header race in London in June.

If you like Formula E, you should read more about Formula E Agency. 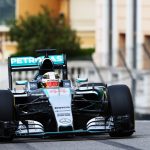