Nico Rosberg has won the 2015 Abu Dhabi Grand Prix ahead of team-mate Lewis Hamilton, with Mercedes once again earning a 1-2 finish. The German led away from pole position, with the threat of a late race battle between the Mercedes team-mates being neutralized by the team’s strategy. 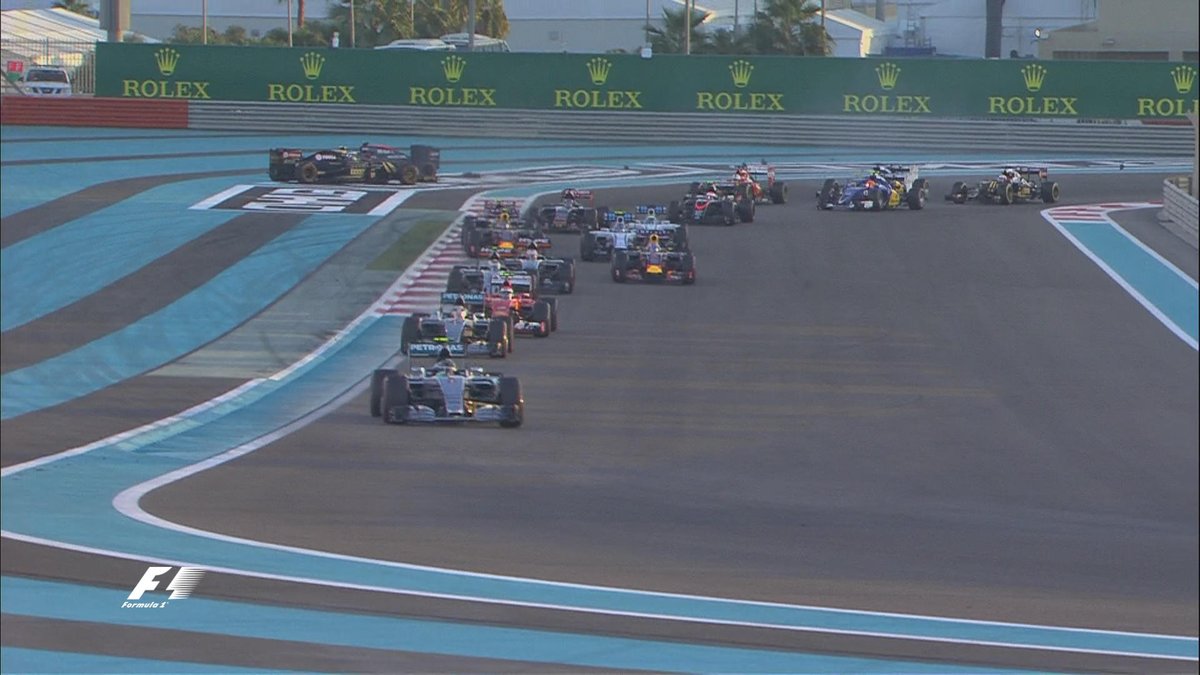 Nico Rosberg grabbed his 6th consecutive pole position in qualifying for the race, with Lewis Hamilton aiming to stop him from winning three races in a row.

Hamilton was unable to replicate his incredible start from a year ago, with Nico Rosberg leaping away to take a 1.4 second lead by the end of lap 1. The first lap was perhaps one of the most exciting of the season, with drivers going three-wide down the long back straights and even through the corners. One man who wasn’t able to get in on the action was Pastor Maldonado, who was out of the race on lap 1 after being crashed into (for once) by Fernando Alonso; with the Spaniard getting a penalty for the collision soon after.

Sebastian Vettel had an unbelievable start to go from 15th to 12th despite having started on the slower tyre. He had a rather tense moment with Max Verstappen in the final sector, with the pair making wheel-to-wheel contact briefly, with both managing to carry on unhindered.

It was assumed that the race would feature just one stop for the drivers, but some would take a gamble and make an early stop to make it two. Daniil Kvyat, Felipe Massa and Daniel Ricciardo were among the first to do so, with the hands of the other drivers being forced by the early stops. Valtteri Bottas followed them in a few laps later, but his race would be destroyed after his team released him into the path of Jenson Button. The pair made contact which broke the front wing of Bottas. He had a long and slow lap to get back to the pits that would drop him well out of the points. 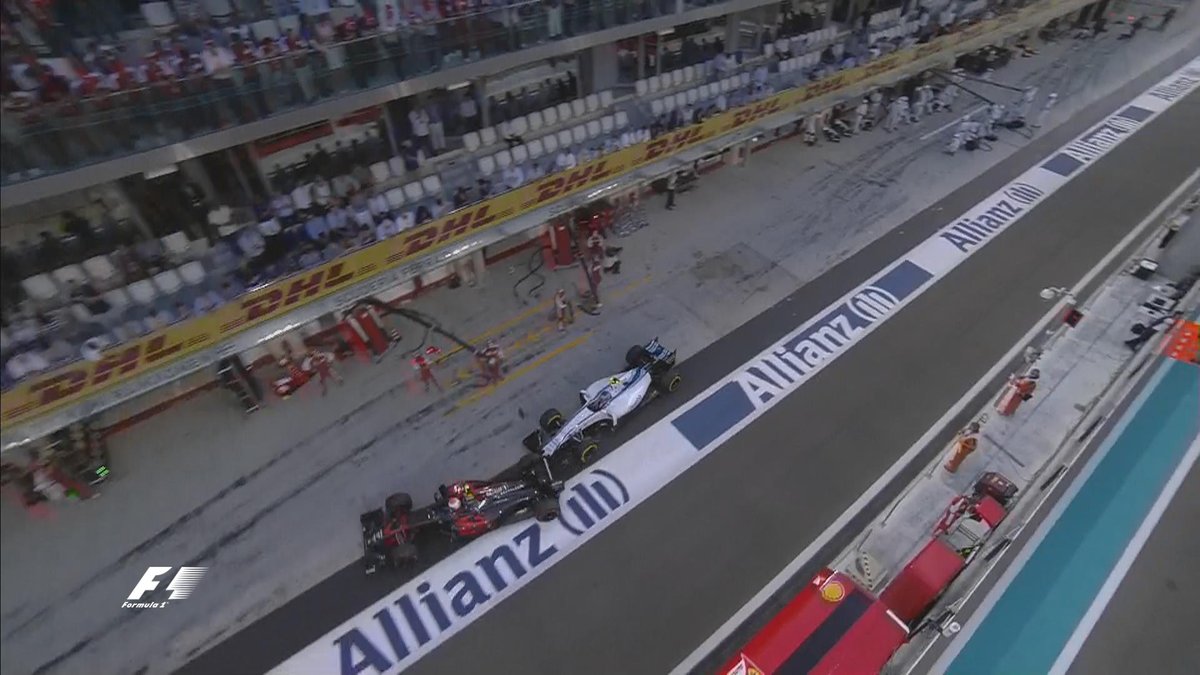 The race leaders Mercedes had said before the race that they would still not be allowing their drivers to pursue alternate strategies, despite the fact that both Hamilton and Rosberg could no longer gain or lose a position in the drivers championship. Rosberg was told to push for a number of laps, during which he extended his lead to 4 seconds over Hamilton.

Rosberg stopped at the end of lap 10, with Hamilton following him in at the end of the next lap. He maintained 2nd behind his team-mate and ahead of Kimi Raikkonen; but now he had Sebastian Vettel in between him and his team-mate due to the Ferrari driver not having stopped yet. Luckily for Hamilton, Vettel was going slowly on his older set of tyres. Lewis was able to get back up into 2nd place by lap 14 with the aid of DRS on the back-straight. Kimi Raikkonen would also pass Vettel soon after, with Sebastian moving over to allow him through.

Sebastian eventually made his first stop at the end of lap 23, with the German emerging in 6th place ahead of Nico Hulkenberg and behind Daniel Ricciardo. Pitting for the first time at the same time was the Lotus of Romain Grosjean, with the Frenchman having put in a great first stint in his last race for Lotus before moving to Haas F1 Team next year.

Nico Hulkenberg pitted a lap later for a 2nd stop, with a 3 stop race now looking likely for the German. The stop seemed to trigger another pit-stop phase for some drivers such as Daniel Ricciardo and Felipe Massa. Sergio Perez soon peeled off into the pits, with the Mexican having had a solid and quiet first half of the race. He rejoined ahead of Daniel Ricciardo once more. 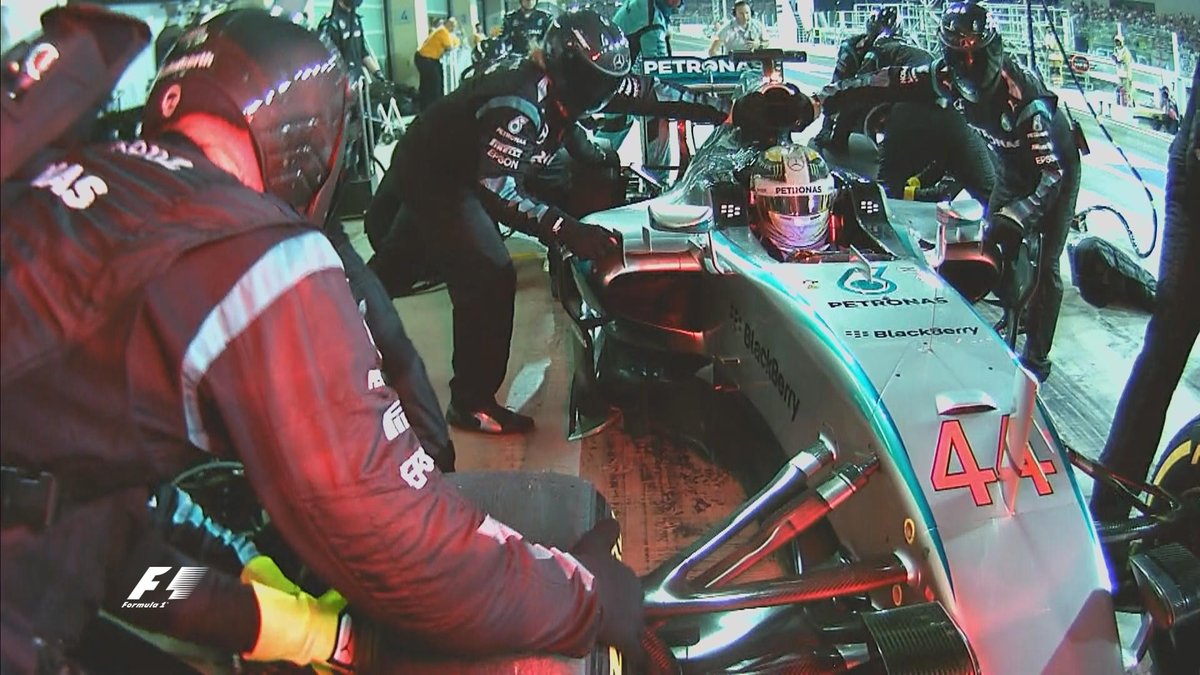 Back up at the front, Nico Rosberg’s lead was starting to get eaten into by team-mate Lewis Hamilton, who put in a string of fastest laps to close to within 2.5 seconds by lap 26 having originally been 6.7 seconds ahead. By lap 28 it was under 2 seconds and soon after that it was down by a further half a second. He was getting ever closer to getting within the crucial 1 second of his team-mate in order to get DRS.

Thankfully for Nico, the set of tyres that had been causing him to lose so much time to his team-mate would finally be discarded at the end of lap 31 for another set of prime tyres, with team-mate Lewis staying out a few laps longer to try and shorten his final stint. If the team let him stay out for just a few more laps, he could possibly fit the faster super-soft rubber for the final stint to try and get a pace advantage on his team-mate for the final run to the flag of the 2015 season.

Lewis continued to stay out on the prime tyres, with the world champion still on his old set of tyres as they entered the final 15 laps. He briefly asked his team whether he could make it on only one stop, but he was told that would be ‘impossible’. He finally pitted at the end of lap 41, but it wasn’t for the faster super-soft tyres! It was for another set of softs; thus making the 12 second gap to Rosberg nigh on insurmountable; with many bemoaning Mercedes for not allowing their drivers to race despite having nothing to lose.

Nevertheless, Lewis started trying to gain as much as he could, with a new fastest lap being set on lap 43 to gain by 7 tenths of a second. He set another fastest lap on the next lap, with a 1.7 second chunk being taken out of him soon after due to Rosberg losing time behind the lapped cars of Max Verstappen and Jenson Button. Soon, however, the gap soon started to stabilize between the two team-mates, with the lead of the final race in 2015 looking to have been decided. 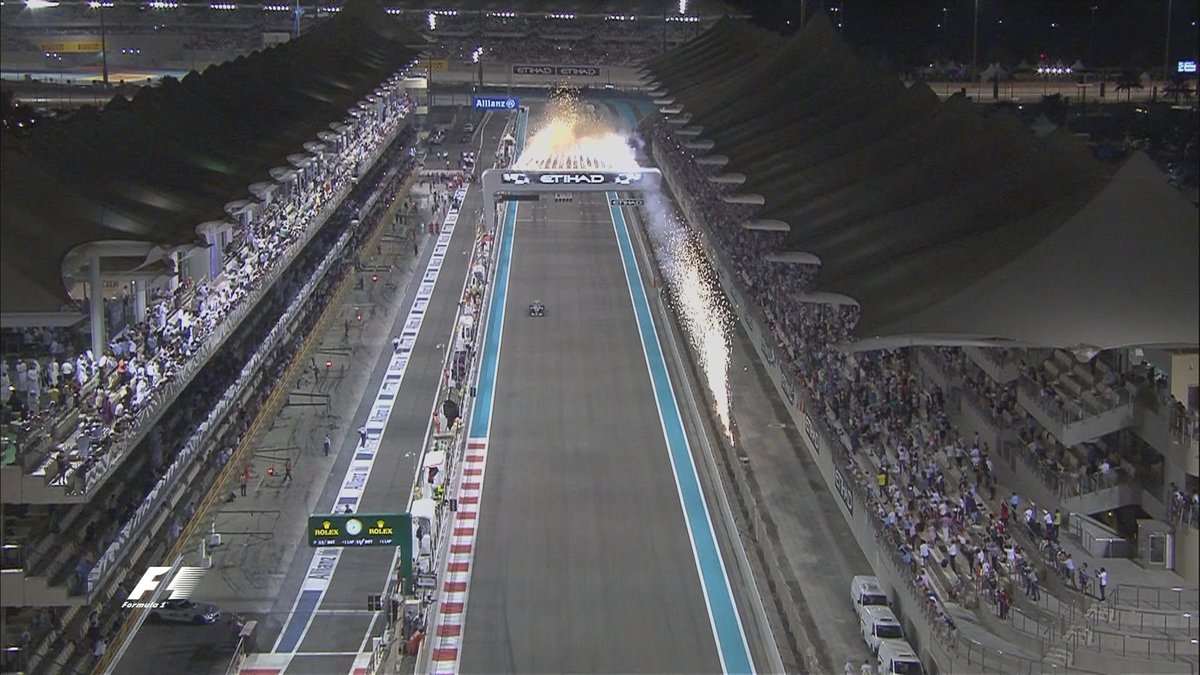 Nico Rosberg crossed the line at the end of lap 55 to take his first ever F1 hat-trick of victories by 8 seconds over Lewis Hamilton, with Kimi Raikkonen taking the final spot on the podium for Ferrari.

Sebastian Vettel drove a great race to take 4th after starting down in 15th, with Sergio Perez also putting in a great drive to take 5th for Force India. Daniel Ricciardo and Nico Hulkenberg following in 6th and 7th, with Felipe Massa 8th for Williams.

Romain Grosjean’s 10 year association with the Enstone based Lotus team ended with 9th place, with Daniil Kvyat taking 10th place and the final point of 2015.

So with that, the 2015 Formula One world championship is over, perhaps in an anticlimactic style, but nevertheless Lewis Hamilton is your 2015 drivers champion and Mercedes are your constructors’ champions. 2016 begins in earnest now for the teams, with Mercedes fearing a possible challenge from their rivals Ferrari.

On a side note, I would like to thank RTR Sports Marketing for taking me on as their Formula One and Formula E correspondent for the last year and a half (Discover Formula E Agency). I will sadly be leaving the team to move onto new projects as of now, but I would like to thank the entire RTR Sports team, especially Emanuele Venturoli who found me and offered me the position back in August 2013. 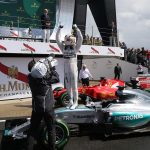