McLaren Formula One test driver is set to make his Formula E debut in next weekend’s London ePrix. The British driver will partner championship hopeful Nelson Piquet Jr at NEXTEV TCR; the 5th driver to race for the team this season.

Turvey recently has raced in the Japanese Super GT and in the World Endurance Championship. Last weekend he narrowly missed out on winning the LMP2 class at the Le Mans 24 Hours having won the previous year. Turvey has been a test driver for the McLaren Formula One team since 2012 and has tested with the team in Young Driver events and mid-season testing sessions on a number of occasions.

Yesterday, NEXTEV TCR announced that they had signed a three-year deal with Nelson Piquet Jr. It is understood that Turvey’s call up to race for the team in London is by no means an indication that he will drive for them next year.

Turvey will join Simona De Silvestro and Sakon Yamamoto as debutantes in the Formula E championship in London. Yamamoto currently leads the FanBoost vote, with De Silvestro placing 5th at the time of writing. Another driver is yet to be announced for the Trulli team, with Vitantonio Liuzzi expected to miss the races due the prior commitments.

An official statement from NEXTEV TCR regarding Turvey’s signing is expected later today. 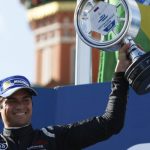