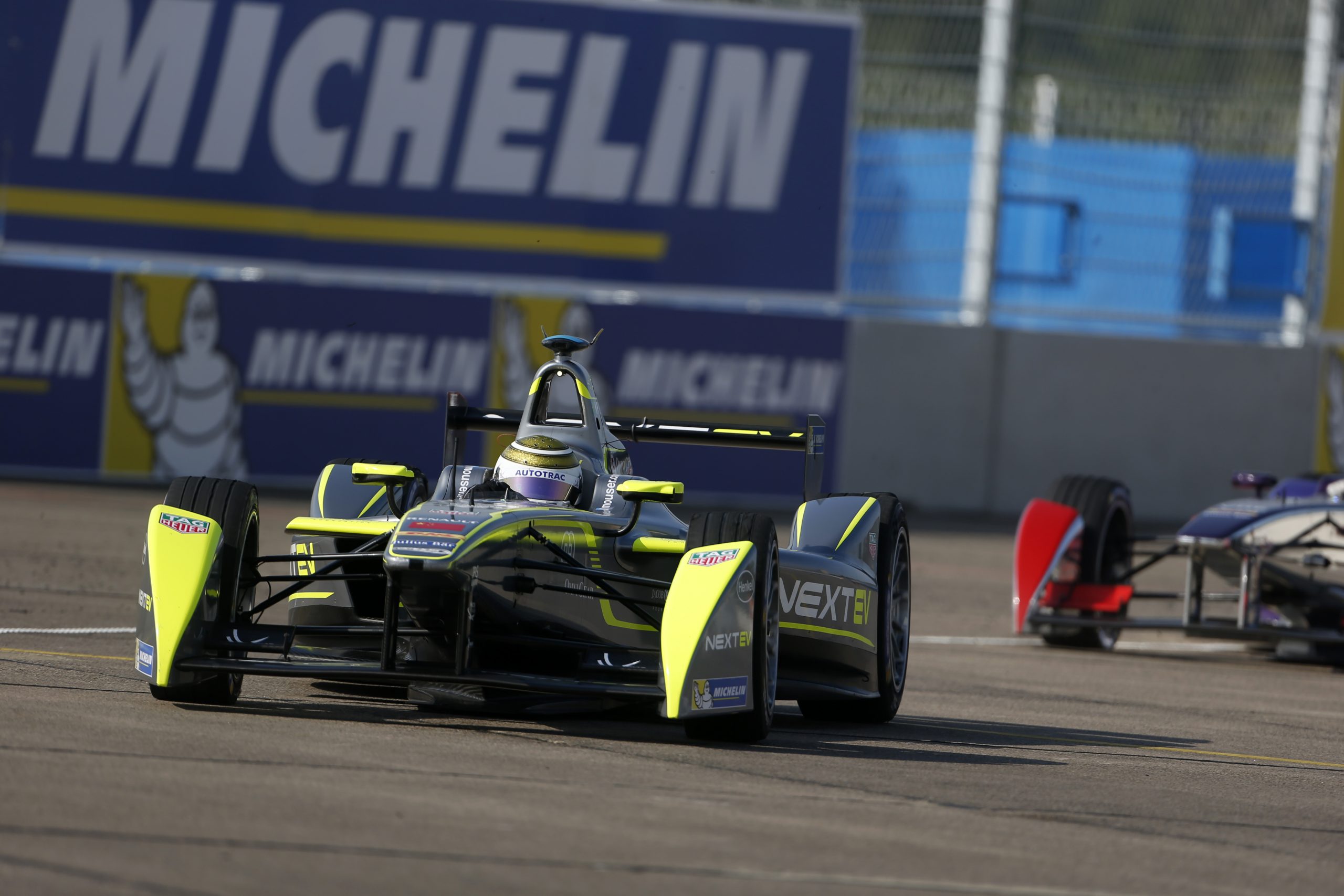 elson Piquet Jr has won the 2015 Moscow ePrix; the penultimate race weekend before the double-header championship decided in London in 3 weeks time. Piquet took the lead at turn 1 and only gave it up when he pitted.

After a ragged, on-the-edge lap in qualifying, Jean-Eric Vergne would start from the front of the grid for the 3rd time this year. Unfortunately for him however, the 3 men directly behind him where the 3 FanBoost winners. Nelson Piquet Jr, Lucas Di Grassi and Sebastien Buemi would all have access to the boost in the race and were coincidentally the top 3 in the drivers’ championship heading into the race.

Vergne got too much wheel-spin as the lights went out which allowed Piquet Jr to vault into the lead into turn 1. Vergne held onto 2nd from Di Grassi who was desperate to keep on terms with his championship rival in the lead of the race. One Andretti car was falling down a position as another gained, with Justin Wilson getting a great start in his first Formula E race to move around the outside of Antonio Felix Da Costa in the tight middle sector of the Moscow circuit.

Piquet started to capitalize on Di Grassi being held up be Vergne, as the championship leader set numerous fastest laps to build a gap to the Andretti car behind.  Piquet was talking to his team on the radio about how he wanted to lead but he didn’t want to use more energy than anyone; which he was doing. He soon was lapping more than a second a lap faster than those behind before starting to slow his pace marginally.

Piquet held the lead for the first half of the race up until his first pit-stop. There was a momentary fear of a safety car after Bruno Senna clouted the wall and lost his rear wing, but the marshals were efficient enough to collect the wing with no race neutralization. Piquet’s stop occurred at the end of lap 17, a lap before any of the other front runners. Vergne, Di Grassi and Buemi were nose to tail for the rest of the lap, with all but Buemi pitting at the end of lap 18. The Audi Sport ABT team got Di Grassi out just ahead of Vergne.

Buemi finally pitted at the end of lap 19, but he would remain stationary for 10 second longer than he needed to be. His team-mate Prost similarly stayed in 10 seconds more on his stop. It would later emerge that the e.dams team thought that the minimum pit-stop time was 10 seconds longer than it was. This massive mistake meant that Buemi would re-join well behind Di Grassi and Vergne, who in turn were a few seconds behind race-leader Piquet; who really needed to save energy after a slightly uneconomical first stint.

The gap started to come down little by little between Piquet Jr and Di Grassi as the laps wound down. With 5 laps to go, the gap was 2.5 seconds between the two Brazilian drivers; whose rivalry really kicked off 2 rounds ago in Monaco. A lap later it was 1.7 seconds as Piquet’s energy saving started to show. It was paying off however as Piquet was now just around 1% lower on energy than Di Grassi.

Another rear wing made a bid for freedom with 2 laps to go, with Jarno Trulli’s car losing vital aerodynamics thanks to an assault by Loic Duval. Once again this wouldn’t warrant a safety car as the drivers made their final tour of the circuit. Lucas Di Grassi had been fired up after having his win taken away from him last time out, but he was unable to catch his title rival. Nelson Piquet Jr would cross the line to take the win of the Moscow ePrix; his 2nd win of the year after winning the Long Beach ePrix a few months ago.

The battle for 3rd came down to the final lap, with a late move by Sebastien Buemi on Jean-Eric Vergne forcing the edams driver to skip the chicane. He appeared to slow down to let Vergne back through, but the Andretti driver never took the opportunity. This allowed Buemi to keep the place, with Heidfeld pulling off an opportunistic move at the hairpin to take 4th from Vergne; who secured 2 bonus points for setting the fastest lap. Interestingly, Buemi ended up finishing 9 seconds behind the race winner in 3rd place, so had the e.Dams team not messed up his pit-stop, he could have been well in the fight for the win.

Daniel Abt came back from a disappointing home race to take 6th ahead of the two Amlin Aguri cars of Salvador Duran and Antonio Felix da Costa. Da Costa had spent much of the race behind Jarno Trulli, who seemed to continually cut the chicane to try and keep the Amlin driver behind. This gave the Italian driver a drive through penalty that would push him out of the top 10 before his aforementioned rear-wing loss.

Thanks to Trulli’s penalty, Prost managed to claim a point despite his team’s pit-stop nightmare. He would finish in 9th place ahead of Justin Wilson, who took the final point in his first Formula E race with Andretti (Discover Formula E Agency). He won’t be in the car for the season finale, as Scott Speed returns from his Global RallyCross exploits.

Piquet now holds a decent buffer of 12 points in the Drivers’ championship heading into the final race weekend of the Formula E calendar. 2 races await the drivers in London to decide who will win the championship. With 50 points on offer all is still to play for.

[Update]: Following the Moscow ePrix, the FIA gave 3rd place finisher Sebastien Buemi a 29 second time penalty (the equivalent of a drive through penalty) that was added onto his race result. This was due to an unsafe pit-stop release that almost saw him collide with Nick Heidfeld. This pushes Buemi down to 9th place and moves everyone from 4th to 9th in the original results up a position. It also puts Buemi behind Lucas di Grassi in the drivers’ championship standings.