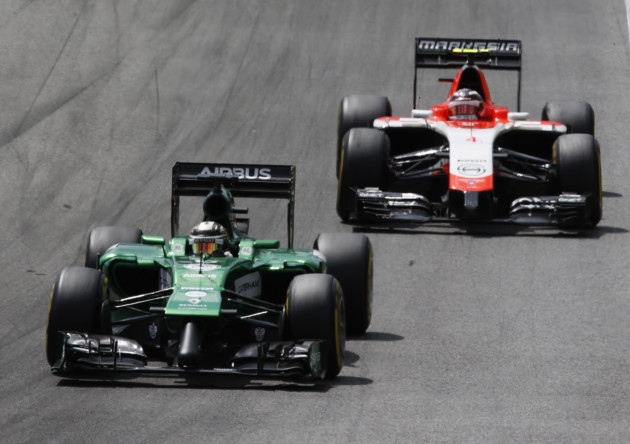 Bernie Ecclestone has confirmed today that both Caterham and Marussia will not race in the United States Grand Prix next weekend at the Circuit of the Americas in Texas. Both teams are understood to be in extreme financial difficulty.

It emerged earlier this week that in the wake of Caterham going into administration, Ecclestone has given special dispensation for the team to miss both the USA and Brazilian rounds of this season with a possible return cited for the final round in Abu Dhabi. Caterham staff have been advised not to return to work until a deal to sell the Leafield-based team has been finalised. It was announced on Friday that the team had been given permission to miss the upcoming two events while a new owner is sought.

It has now also emerged that Marussia are in a similar situation to their constructors championship rivals. Whilst they will miss the US round, it is unknown as to whether they will miss Brazil or Abu Dhabi. This dispells the hopes of Marussia reserve driver Alexander Rossi who may have made his F1 debut at his home race in the place of injured Jules Bianchi. Marussia’s absence also makes it possible for Sauber to steal their 9th place in the constructors championship, which Marussia currently hold having secured 2 points in Monaco earlier this year.

The financial issues are not just limited to the Caterham and Marussia teams as Sauber and Lotus have struggled over the last few years. We’ve also seen HRT leave F1 prior to last year’s season and the ill-fated USF1 team never even turn a wheel prior to 2010. This unfortunate event means that we will only have 18 cars on the grid in America for the first time since 2005. Talks of possible 3 car teams are likely to resurface as they had done earlier this year:

“We have a regulation that says if we lose three teams the other teams will run three cars,” Ecclestone confirmed earlier this year, “I would rather see Ferrari with three cars, or any of the other top teams with three cars than having teams that are struggling.”

The three-car team suggestion has been met with both support and criticism. Former F1 driver and pundit Martin Brundle recently voiced his distaste at the idea:

“They’ll get some prize money but they need a lot more than that to run an F1 team – at this level maybe £60 million or such like. I don’t like the idea of three-car teams. I would much prefer there are 12 strong two-car teams.”

Team principals have also been vocal in their disapproval, such as Force India’s Vijay Mallya

“I am a firm believer that every effort should be made to ensure that all teams, big and small, survive and race – that is part of the DNA of Formula 1,” he said, “But the regulations and the agreements do provide that if the grid is less than 20 cars then participating cars will run a third car. I hope it will never come to that, as I said I think the DNA of F1 should be preserved.

“I will repeat once again that I will try and persuade the decision makers and the commercial rights holders that they should look very seriously at a more fair and equitable revenue share model so that we do not have to answer such questions all the time.”

There are some possible benefits to having three-car teams however. The competition in races would ramp up as there would be more front-running cars. It would also make the first qualifying session more important as the possibility for a major scalp would increase. Most importantly however, it would ensure that we have 24, well funded, competitive cars on the grid instead of 18. This number could even get higher with the addition of Haas Formula One Team and Forza Russo in 2016 along with a rumoured entry by Audi that has been talked about this week.