Lewis Hamilton has won the 2014 Russian Grand Prix after leading every single lap from lights to flag. He only relinquished the lead for half of the first lap after Rosberg took the lead into turn 2. A major lock-up however meant that Nico had to pit on lap 1, ruining his chance at a race win. He would fight back for 2nd place, with Bottas taking the final place on the podium.

The drivers all ventured to the front of the grid for a minute silence for Jules Bianchi, who is still in hospital following his crash in last week’s Japanese Grand Prix. They then remained there for the Russian national anthem as a result of an unusual request by the Russian Prime Minister.

Hamilton got a slightly better start than Rosberg from the front of the grid, but the long run down into the first braking zone meant that Rosberg was able to pick up a brilliant two in Hamilton’s slipstream. Lewis defended as hard as he could, but Rosberg drew alongside on the inside. It looked as though the lead was going to Rosberg, but he had a massive 60 meter lock up which forced him to straight line turn 2.

He rejoined almost a second ahead of Hamilton, but had now picked up a massive vibration on both front tyres. Hamilton soon re-passed his team-mate, before Nico pitted at the end of the lap; a massive blow to Rosberg’s race considering that it was going to be a one stop race. Felipe Massa was also in a similar situation as he pitted as well. They both emerged at the back of the field.

Russian rookie Daniil Kvyat didn’t have a dream start to his home GP from 5th on the grid. He dropped from 5th to 7th on the opening lap and then dropped a further 2 positions after the two Red Bull drivers made their way past. It was a different story for his team-mate Jean-Eric Vergne. The Frenchman is fighting for his drive in Formula One at the moment, a fight that he is proving himself well in. He hung around the outside of the long left of turn 3 to get the inside  line on Kevin Magnussen into turn 4. The Frenchman briefly held 5th place, but was re-passed by Magnussen in the DRS zone on the next lap.

The pit strategy, as mentioned before, was short and simple for the Russian race: a one stop strategy at the mid way point in the race. Rosberg’s calamities at the start of the race had ruined that however. The team had now given him the target of finishing the race on tyres that he’d moved onto at the end of lap 1. Felipe Massa was in the same situation, but they would have to be super conservative in order to get their tyres to last 52 laps.

You wouldn’t have thought that they were being conservative however. By lap 10 they were up to 15th and 16th. 10 laps later, Rosberg was up into the points after passing Grosjean, Ricciardo, Hulkenberg, Gutierrez and finally Perez. Massa was finding it slightly more difficult in his Williams, but he eventually managed to get into the points positions.

It seemed as though there was no defined pit-stop phase, as cars came and went largely unaccompanied. Jenson Button pitted from 3rd place and emerged behind Nico Rosberg who was now up to 7th. If the German could make his tyres last until the end of the race, he was on for a remarkable podium!

Fernando Alonso inherited 3rd momentarily before pitting on lap 25. It was a horrible pit-stop as the front jack-man first dropped the car too early, then he dropped it again and then finally got in the way when Alonso was trying to accelerate away. He would drop into 9th place, behind Rosberg and Massa.

Race-leader Hamilton then made his stop on lap 27 and emerged in the lead; such was his lead over Valtteri Bottas in 2nd. Bottas then made his stop a lap later. He rejoined behind Sebastian Vettel, who was due a pit-stop in his Red Bull. Vettel kept Bottas behind until lap 32 when he finally pitted, but the damage was done because Rosberg was now right behind him in 3rd place!

Rosberg made a late lunge up the inside of turn 2, with Bottas luckily turning out of the corner so that he didn’t collide. Rosberg was now up to 2nd place! He now just had to make sure he could make it to the end of the race on tyres that would be well-worn. Felipe Massa, who had been in the same boat as Rosberg, had given up on making it to the end and had subsequently pitted for soft tyres. This had put him well outside of the top 10.

It certainly seemed as though Rosberg was going to make another stop, as he soon started pumping out fastest laps in his chase of Lewis Hamilton. Just 6 laps after passing Bottas, he was 6.6 seconds ahead and 16 seconds behind Hamilton. Lewis responded to any small hope of a challenge from Rosberg by putting in his 2 best laps of the race on lap 40 and 41, the latter being the fastest lap of anyone. This had put the lead at a seemingly unbridgeable 18 seconds.

Williams seemed certain that Rosberg was trying to build a gap so that he could pit in the last few laps. On the contrary, Mercedes asked Rosberg whether he could make it to the end, to which he replied: “Easy. Well not easy but I can get it to the end.” The race win was now out of reach, with the objective turning into a defense against Bottas who was closing back in.

The fastest lap went Bottas’ way as he tried to reel in Rosberg. The lead was down to just under 5 seconds, but the laps were going to run out before he could challenge him. Even if he had caught him, it appeared as though Rosberg still had some tyre life left as he had the fastest lap in the closing stages, before Bottas went even quicker on the final lap of the race.

Back up front, Hamilton was just cruising home. His lead had come down to 16 seconds, but he didn’t have to threat. He would cross the line on lap 53 to take his 4th consecutive race win and his 9th this season. This would be his 31st career win which would put him tied with Nigel Mansell for the British record for F1 victories.

McLaren took their best finish of the season since their double podium in Australia. Jenson Button took a brilliant 4th place, with Magnussen bouncing back after his grid penalty to take 5th place after starting 11th.

Fernando Alonso was the first non-Mercedes powered finisher in 6th for Ferrari ahead of the Red Bulls of Ricciardo and Vettel. Kimi Raikkonen made it two Ferrari’s in the top 10 in 9th place, with Sergio Perez taking the final points paying position in 10th.

Felipe Massa was unable to replicate Rosberg’s strategy as he finished just shy of the top 10 in 11th ahead of Hulkenberg and Vergne. Daniil Kvyat failed to score points in his home race after finishing a disappointing 14th.

The two Sauber drivers failed to get into the points again, with Sutil being spun around halfway through the race in an incident with Romain Grosjean. Whilst some believed the spin to be no more than a racing incident, the stewards decided to penalize Grosjean with a 5 second stop/go penalty and points on his racing license.

Only two drivers failed to finish the race. Max Chilton was the first to retire in a week to forget for Marussia; who were denied the chance to put in a good result to commemorate their driver Jules Bianchi. Kamui Kobayashi joined his rival in retirement after a strange circumstance. Caterham decided to retire the car despite their being no fault at all.

Race winner, Lewis Hamilton: “It’s been an incredible weekend and it’s been an unbelievable job from this team for what they have achieved and it’s been great to be a part of it. The car has been a dream to drive and I could have only dreamed of a day like this.”

2nd place, Nico Rosberg: “I was in a battle with Lewis and I messed up. It was a bad mistake too. It was my corner – or I thought it was – but it was the first time arriving there at full speed with full fuel. I thought I wouldn’t get into the top 10 after that but the car was amazing. There was one phase when I had a lot of degradation. I got a lot of oversteer and I thought they wouldn’t make it to the end of race. I was nursing them a lot. In the end I could have got more out of them. I was driving the whole race on tyres that they said you cannot do any more than 29 laps on them.”

3rd place, Valtteri Bottas: “We really went in to the race thinking that we could battle with Mercedes for the win but that was not the case in the end. We are not here to be the best of the rest we are here to be the best and we are aiming for that. There are three races to and it’s going to be really hard to beat them in those races but over the winter we will be working to close that gap.” 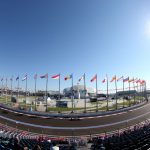 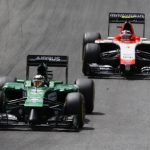