Lewis Hamilton has kicked off his championship-defending year in the best way he could have hoped for after claiming pole position for the 2015 Australian Grand Prix. Hamilton beat team-mate Nico Rosberg by over half a second in the final 12 minute session, with the German having an off-track excursion on his first run at the final turn. Felipe Massa was the closest competition to the Silver Arrows after qualifying in 3rd place, but he was still 1.4 seconds off of Hamilton’s pole position time. 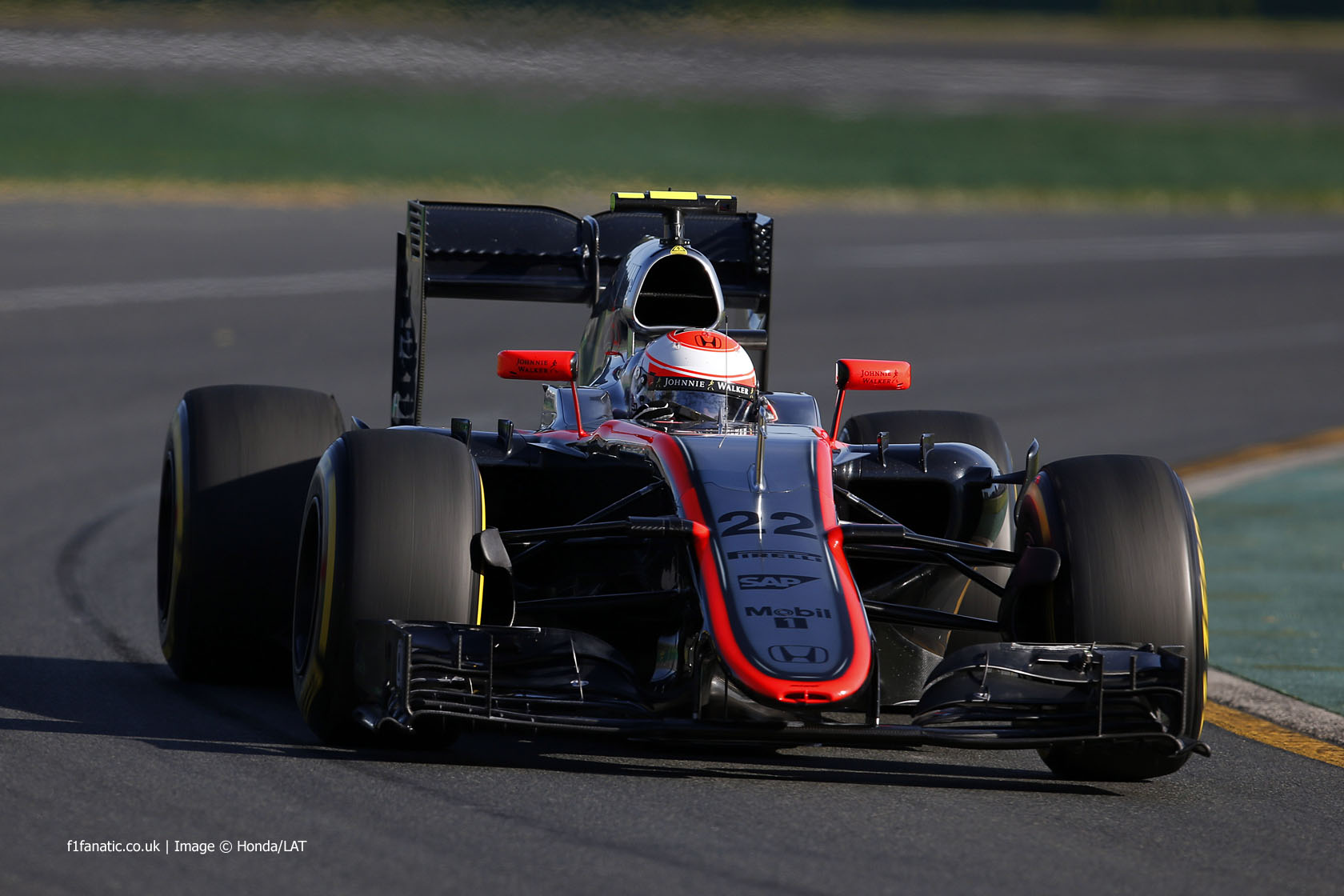 With practice seemingly showing a similar scenario to last season, Mercedes quickly punched their ticket into the second qualifying session after running on the slower medium compound tyre. The rest of the field would venture out on the faster soft compound tyre later on in the session, but no one could displace the Mercedes from the top 15 cut-off.

Sebastian Vettel had led the times early on in his first qualifying session for Ferrari. The German had looked very comfortable behind the wheel of the SF15-T and had seemed to be faster than Kimi Raikkonen for a majority of the running so far. His former team of Red Bull looked to be in a little bit of trouble, as both Ricciardo and Kvyat had spent time in or near the cut-off zone of P16 and below. Kvyat had been hit with technical problems early on but managed to lift himself into Q2 along with team-mate Ricciardo.

Fellow Red Bull sponsored drivers Max Verstappen and Carlos Sainz impressed early on in their rookie qualifying sessions. Max, who will become the youngest driver to ever race in a Formula One Grand Prix tomorrow at 17 years old, put in a superb lap which put him P3 at one stage. Carlos Sainz similarly showed good pace despite one spin at the final turn. He joined his team-mate in Q2.

One of the sensational stories in the run up to the 2015 Formula One world championship was the revival of Manor Marussia. The team went into administration before the United States Grand Prix last year and looked to be joining former rivals Caterham as they left the championship. That wasn’t to be the case however, as an 11th hour deal saw the team make it to Australia with drivers Will Stevens and Roberto Merhi. The team will sadly not take part in the race tomorrow after not getting out on track at all in the event after prevalent software issues. The team expect to have a better showing in Malaysia in two weeks time.

Manor’s failure to qualify meant that only three drivers would be eliminated in the first session. Those positions would go to Marcus Ericsson, who finally had his race seat with Sauber secured after Giedo Van der Garde dropped his legal action against the team, and the McLaren’s of Jenson Button and Kevin Magnussen; who are still off the pace while the team continue to develop the new Honda power-unit. 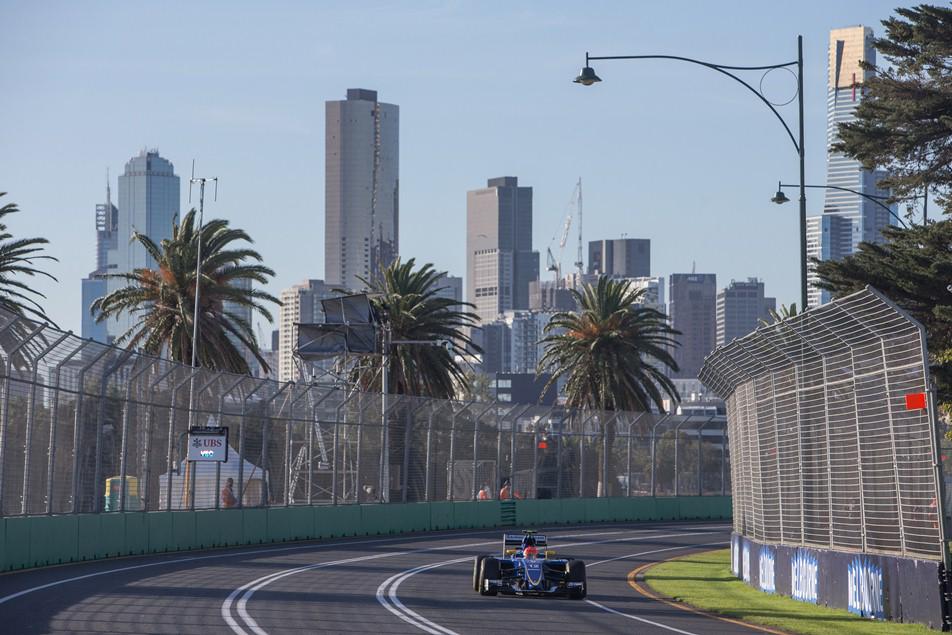 Mercedes dominance continued to show in the second qualifying session, with Lewis Hamilton snatching the fastest time of the weekend with a 1’26.894 to finish fastest in the session again. The Mercedes pair finally used the soft tyre compound in the session, with Nico Rosberg 2 tenths behind. The pair made their runs relatively early in the session and then stayed put in the garage for the remaining minutes as their spots in the top 10 shoot-out were sealed.

One driver who wouldn’t venture any further in the session was Daniil Kvyat. After managing to steal a spot in the second session, the Russian was unable to get a good enough time to seal a spot in Q3 in his début for Red Bull. He will start in 13th ahead of the two Force India cars. Hulkenberg and Perez were separated by a thousandth of a second, but will start 14th and 15th.

After an impressive showing in the first session, Max Verstappen was unable to qualify in the top 10 for his Formula One début after making a mistake at turn 5. He will start P12, with team-mate Carlos Sainz making it through into the final session on his début. Felipe Nasr put in a great performance, but was just shy of making it through to the shoot-out in P11 having beaten his team-mate Ericsson to Q2.

One team who did manage to get both drivers in the final session was Lotus. After a problematic year in 2014, both Romain Grosjean and Pastor Maldonado were able to put their Lotuses in the final session. The team struggled last year, mainly with their Renault power-unit which was largely considered the worst engine. Having switched to Mercedes power, however, the team seem to be a dark horse of the mid-field runners. 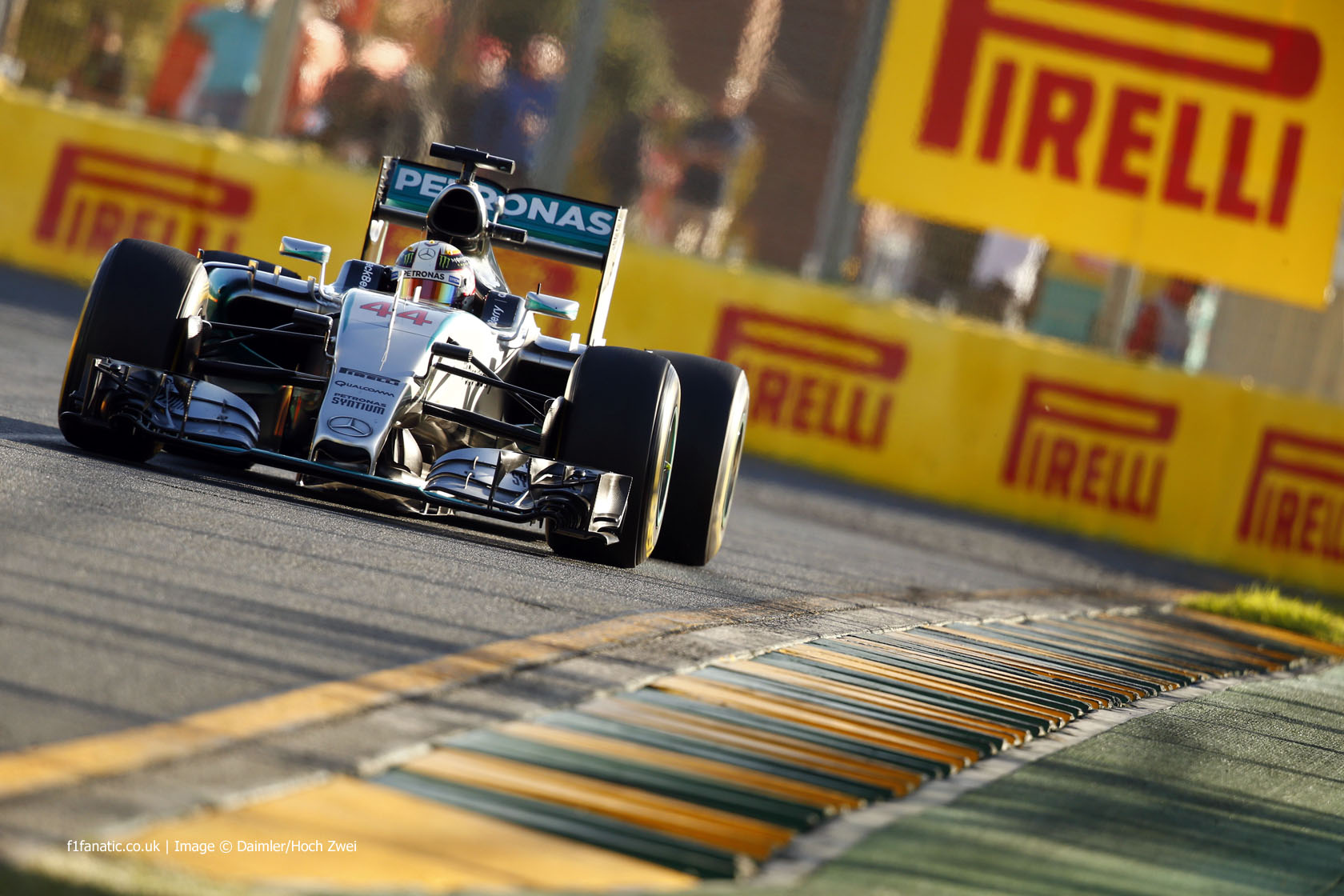 The first top 10 shoot-out of the season would be contested by two cars from Mercedes, Williams, Ferrari and Lotus, with two Red Bull sponsored cars completing the runners; albeit Ricciardo’s Red Bull and Sainz’s Toro Rosso.

The drivers would make two runs in the session, with Lewis Hamilton heading the time-sheets after the first run, with almost half the session gone at that point. The reigning world champion put in a brilliant 1’26.6; the fastest time in Australia this year so far. Team-mate Nico Rosberg had been out on track for a run and was indeed on a flying lap. He wouldn’t complete his lap however after making a mistake at the final turn. He ran wide onto the grass and elected to come straight back in the pits for new tyres. Valtteri Bottas was also struggling on his first run after complaining that his brakes had no bite in his Williams.

The final runs soon began, with the two Mercedes cars seemingly the ones in the fight for the first pole position of the season. Nico Rosberg was the first to come across the line, but he wasn’t able to beat his team-mate. The German had to settle for a 1’26.921, 3 tenths slower than Hamilton’s time. Hamilton was pretty much assured of pole position so long as there wasn’t a superhuman effort from anyone further back; which there wasn’t. This didn’t stop Hamilton however, who elected to finish his lap. His final effort was 3 tenths quicker than his previous best, which extended the gap between him and his team-mate to an impressive 6 tenths of a second.

Felipe Massa put in a late lap to take 3rd on the grid, 4 hundredths quicker than Sebastian Vettel who qualified P4 for his first race for Ferrari. It was a tight battle for positions 3 to 5, with Massa, Vettel and Raikkonen separated by 8 hundredths of a second. The second Williams of Bottas very nearly lost control of his car on the exit of the final turn, but the opposite lock deployed by the Finn to keep his car on the track would limit him to P6. Following the session, Valtteri was taken to hospital for precautionary treatment of a lower-back problem. Williams later commented that it would go either way as to whether Valtteri would race tomorrow with an update expected early Sunday morning. If he races he would start ahead of home-hero Daniel Ricciardo and rookie Carlos Sainz; who will start his first Grand Prix from a great P8. The two Lotuses completed the top 10. 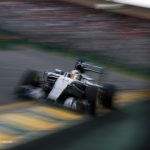