Lewis Hamilton has won the 2015 Russian Grand Prix after his team-mate Nico Rosberg retired from the race. Sebastian Vettel took 2nd to take 2nd in the championship standings, but Hamilton and Mercedes look set to claim the title next time out in Texas 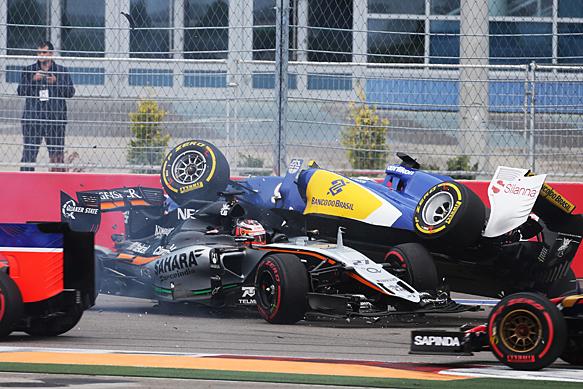 As the lights went out over the drivers, it was a fairly even start between the two Mercedes drivers, with Hamilton tucking into the slipstream of his team-mate on the long run down into the first braking zone. Hamilton briefly drew ahead into the 2nd turn, but Nico prevailed on the inside and held the lead.

The race was quickly neutralized by the safety car after a spin for Nico Hulkenberg in the middle of the pack. He was clipped by Max Verstappen and hit Marcus Ericsson, but luckily for Max he was able to continue with only a puncture. Ericsson wasn’t as lucky and retired from the race along with Hulkenberg.

The debris and the cars were cleared quickly by the marshals, and the race was back under-way at the start of lap 4. Valtteri Bottas used the power of his Williams to slipstream past Kimi Raikkonen to take 3rd place on the run into turn 2. Meanwhile at the front, Rosberg managed to get a great restart to get clear of Hamilton, but Lewis started to eek closer once again over the course of the lap. Nico was also on the radio complaining to his team that the throttle pedal was sticky; meaning that the pedal was becoming difficult to lift off.

Soon the problem became much worse, with the inability to lift off forcing him to go wide into corners. This allowed both Hamilton and Bottas to easily pass him and take his lead away. The problem soon consigned Rosberg into the pit-lane, with the team soon pushing the car into the garage and into retirement. A hard blow for Rosberg who’s championship hopes look very bleak.

With Hamilton now leading, the team soon urged him to stop fuel saving, as Valtteri Bottas was slightly too close for comfort. Hamilton duly obliged by setting a new fastest lap whilst opening the gap up from 1.8 seconds to 3.4 within 2 laps.

The lead was soon wiped out once again, with the safety car needing to come back out after a heavy hit for Romain Grosjean at turn 3. The Frenchman appeared the lose the rear end of his car at the exit of the turn which sent the car sideways into the barrier. All 4 corners of the car were damaged with debris showering the circuit. Romain thankfully walked away completely unscathed; with the incident being the 2nd heavy accident this weekend after Carlos Sainz’ shunt in practice 3. 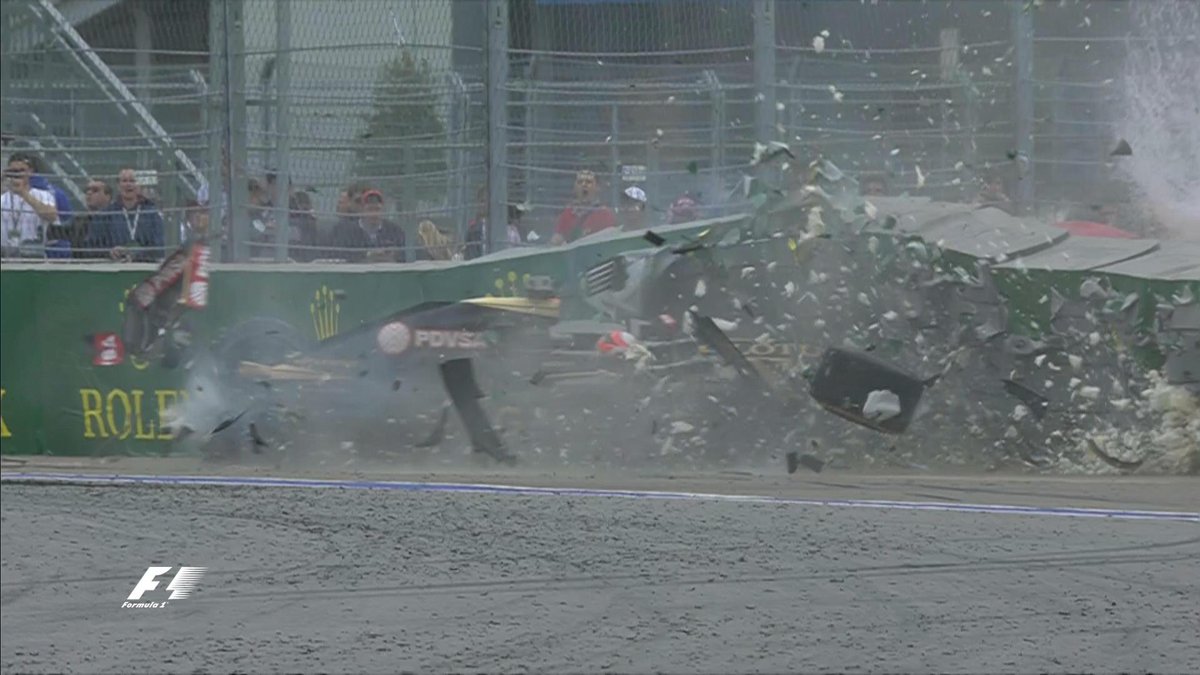 The heavy hit seemed to create holes in the barrier which required repairing by the track-side officials. The repairs were all done by the end of lap 16, with the race restarting on that lap. Hamilton had been complaining that the safety car was too slow and that he was struggling to keep the temperatures up. He managed to hold off Bottas on the restart, with the Finnish driver almost running into the back of the Mercedes. Lewis managed to put in a blinding first lap to set the fastest lap of the race and to pull away by over a second.

Behind Hamilton and Bottas, the battle for third between the Ferrari drivers was heating up. Vettel used the draft of Raikkonen to set up a move into turn 1, with the German moving over to the inside line at the very last moment. The move forced Raikkonen to cut turn 2, with the team ordering Kimi to give the place back soon after.

The next driver up the road was the Williams of Bottas in 2nd place, with Vettel closing the gap consistently once he had passed his team-mate. The gap was just a second by lap 26, with the pit-stops looking likely to begin soon after as the Williams squirmed through the corners of the Sochi circuit. Bottas would indeed pit at the end of the lap, with Vettel continuing on to try and take the place during the pit-stop phase.

The new top 3, Hamilton, Vettel and Raikkonen, stayed out on track for a number of laps longer than Bottas, with Vettel pitting 5 laps later that Valtteri. Ferrari’s stop was a whole second faster than Williams’, with Vettel emerging a second ahead of Bottas to take 2nd place. Kimi Raikkonen pitted in the 2nd Ferrari on the next lap, with the team getting Raikkonen out right on the gearbox of Bottas. Race leader Hamilton pitted at the end of lap 32, with the Mercedes driver coming out comfortably in the lead of the race.

Raikkonen was still on the back of his fellow countryman Bottas in the battle for theoretical 3rd, with the pair almost coming to blows as they banged wheels on lap 36 of 53. Bottas just managed to hold the position, with the pair catching up the a pair of drivers who were out of position having pitted much earlier in the race. Perez and Ricciardo were 3rd and 4th on the track but would possibly need to pit due to the extra wear on their tyres.

Bottas and Raikkonen looked to have the pace to catch Perez and Ricciardo, but it wouldn’t be as easy as some might have thought, with the Force India and the Red Bull still holding onto the positions with just over 10 laps to go. Sergio and Daniel both started to struggle in the closing stages, with Bottas closing right up to the back of Ricciardo’s car. He breezed past the Australian on the run down into turn 1 on lap 45; with the Finn’s sights now set on Sergio Perez.

Raikkonen tried to follow Bottas through, but Kimi ran far too deep into turn 2 and had to give the position back. He finally made the move stick on Daniel 2 laps later into turn 2 once again. Sadly for Daniel, he would retire a lap later at the side of the circuit, seemingly with suspension issues.

Bottas had closed the gap to Perez in the battle for the final podium position; but he wasn’t able to capitalize on his straight line speed like he had been able to previously. What was worse was that Kimi Raikkonen was closing in rapidly after a string of excellent laps. Bottas had to make the move soon, and he did, with an excellent move up the inside of turn 13.

Unfortunately for him though, Raikkonen followed him through and was still looking to work his way through on the final lap of the race. Kimi tried to get him up the inside of turn 4, but the move was ambitious but unsuccessful; Kimi punted the back of the Williams and sent Bottas into the wall. Kimi would then lose 3rd due to damage, with Perez taking 3rd on the final lap. 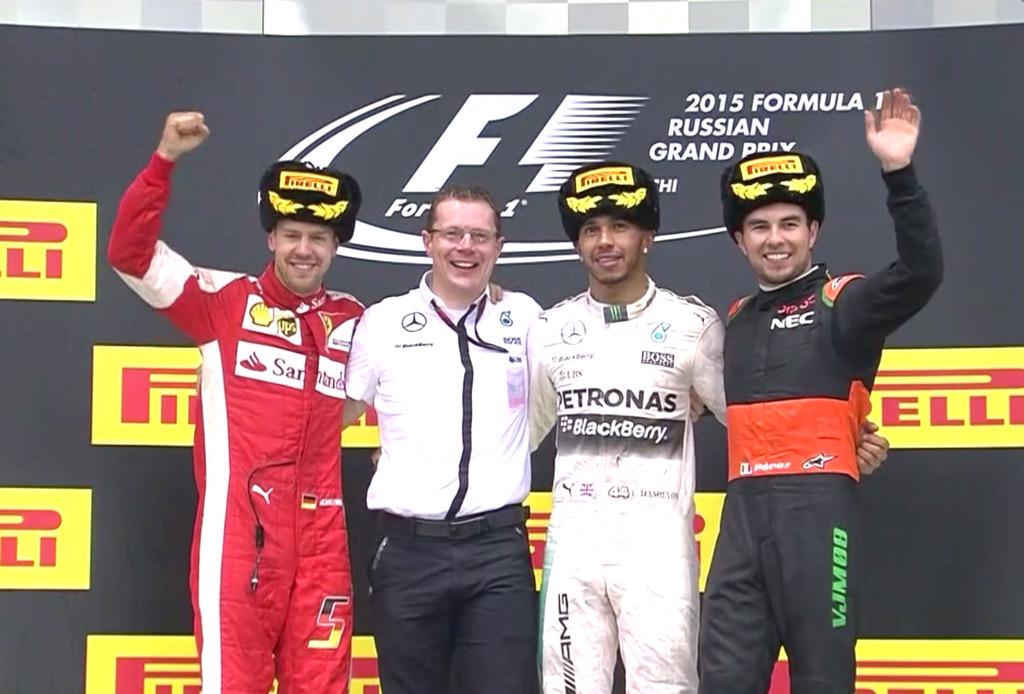 Up at the front, Lewis Hamilton had driven a perfect race after his team-mate’s retirement to take his 42nd Grand Prix victory. The result was enough to claim the constructors’ championship for Mercedes and it also sets Lewis up to win the championship next time out in the United States Grand Prix should he score just 3 points.

2nd place would go the way of Sebastian Vettel, with a superb 3rd place going to Sergio Perez after a fantastic drive having made his tyres last from lap 12 to 53. 4th would go to Felipe Massa, who worked his way up from 15th to take advantage of his team-mates crash on the final lap.

Kimi Raikkonen recovered after his last lap lunge on Bottas to crawl home in 5th, with Daniil Kvyat taking 6th in front of his home crowd. 7th would go to Felipe Nasr, who put in a great drive in the Sauber to come home ahead of Pastor Maldonado’s Lotus. 9th and 10th would go to McLaren, with Jenson Button and Fernando Alonso taking a double points finish.

The result means that Lewis Hamilton and Mercedes look poised to take both the drivers’ and constructors’ championships next time out in Austin for the United States Grand Prix. With Sebastian Vettel now 2nd in the standings following Rosberg’s retirement, Hamilton needs to outscore Vettel by just 10 points next time out. Mercedes could still take the teams title today should Raikkonen be penalized, but if not they just need 6 points next time to take their 2nd straight championship. 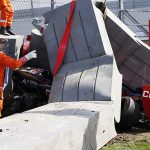 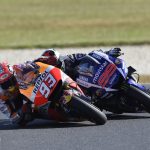