Movistar Yamaha MotoGP‘s Jorge Lorenzo kick started the 2016 MotoGP season tonight with a masterful victory at the Commercial Bank Grand Prix of Qatar. Valentino Rossi also put on an impressive performance during the opening round at the Losail International Circuit, finishing in fourth place.

Lorenzo‘s race went according to plan at the start of the opening race when he had a perfect launch off the line from pole position. He led for the first lap, but was chased by Andrea Iannone and Andrea Dovizioso on the over one kilometre long straight at the Qatar track. The Spaniard was forced to let them pass, but he didn‘t give up. As his rivals battled each other he lay in wait and after Iannone crashed out the Yamaha rider took his chance to make a charge for the lead for the second time. With 14 laps to go, he smoothly passed Dovizioso and continued to increase his pace. 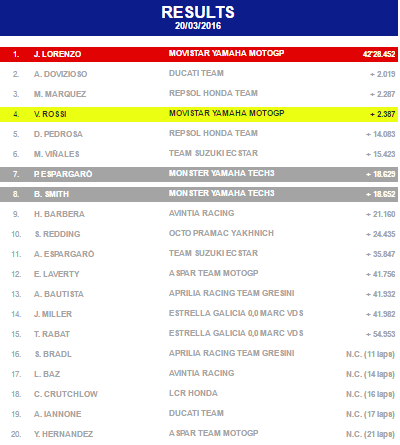 With clear a track in front of him, the Majorcan was in his element. In an effort to shake off Dovizioso completely, he used the nimble YZR-M1 to the fullest, setting a new fastest race lap record of 1‘54.927s. He slowly inched away and crossed the line for the final time with a +2.019s lead over the man in second place.

Starting from fifth on the grid, teammate Rossi had a good start and made sure he placed himself close to the front, in fourth place, to stay in contention. He shadowed his teammate as the top five formed the leading group, but couldn‘t find a way through. With rival Marc Marquez pushing him down one place with 20 laps to go, the Doctor used his experience and bided his time, hoping he could benefit from his harder option rear tyre towards the end of the race.

His strategy paid off when the rivals in front of him got involved in a scrap, causing Iannone to crash out. Now in fourth, he put pressure on Marquez by setting multiple personal best laps of the race, as he didn‘t want to let Dovizioso and Lorenzo pull away. As the top three upped their pace towards the end of the race, the Doctor kept pushing to the maximum and set the fastest lap of the race thus far, trying to hang on to the back of Marquez. The battle for second between Dovizioso and Marquez lasted until the final corner, giving Rossi a chance of reaching the podium, but he came just short and took the flag in fourth place, +2.387s from his teammate.

Thanks to today‘s results Movistar Yamaha MotoGP take the lead in the teams‘ championship with 38 points. The next round will be held at the Termas de Río Hondo Circuit, Argentina, in two weeks‘ time. 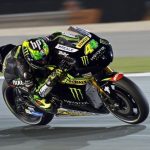 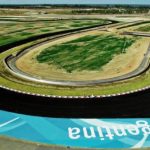