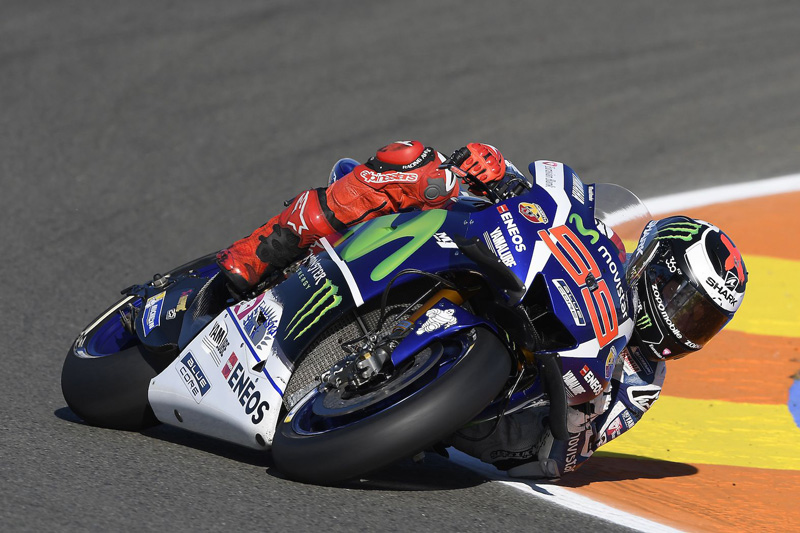 This weekend holds great significance for Lorenzo, as it marks his last appearance for Yamaha. The Mallorcan is set on finishing his nine-year run on the YZR-M1 on a high and made his intentions clear when he took over at the top of the leaderboard just 15 minutes into FP1 and held the position for a large part of the session. With a few further tweaks made to his bike‘s setting, he upped the pace at the end of FP1 and dropped a 1‘31.045s to reclaim first place in the final minutes.

The local hero carried his speed straight into the afternoon session, leading from the start. When his rivals upped the pace at the end of FP2, Lorenzo didn‘t hesitate to respond. The last ten minutes then became a flurry of activity but the Spaniard had the last laugh when he delivered an impressive 1‘30.463s, the first lap under the 1‘31 mark of the weekend, to finish first in the combined times. He was 0.247s faster than his closest rival.

Rossi had a less than desirable start to the Valencia Grand Prix. Unable to complete his out lap due to technical issues he returned to the pit box. Putting the small detour through the paddock behind him, the Doctor was back on his way on his second bike a quick ten minutes later to start his quest for the perfect setting. He consistently improved his pace when switching back to his first bike and wrapped up the session in second place, 0.387s behind his teammate, with a 1‘31.432s lap.

Rossi got straight down to business in the second practice, holding third on the timesheets for most of the session whilst working on improving the feeling with the bike with the harder tyres. In the final stages of FP2 he was sitting in fifth place when the lap times tumbled. The Italian was able to better his morning time when he put in the softer option and finished in eighth place in the combined times with a 1‘31.257s, 0.794s behind his teammate.