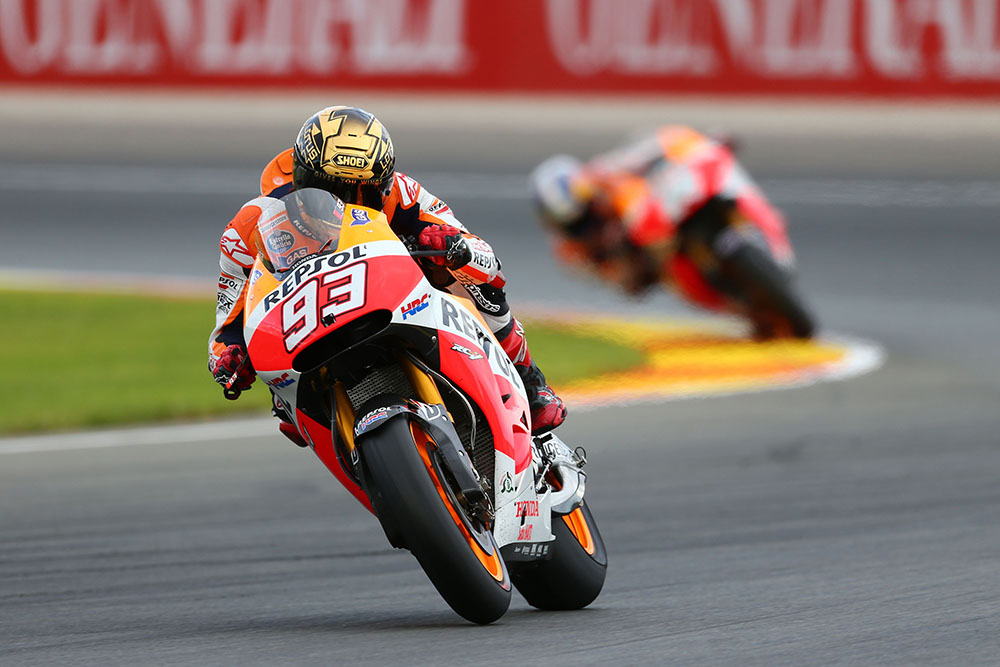 MotoGP world champion Marc Márquez keeps breaking records, even if it’s the last race of the season. After a good start, Márquez stayed third behind Valentino Rossi and a incredible strong Andrea Iannone, who left the first turn as leader. Márquez sticked behind them and overtook first his favorite rival Rossi and later the weakening Iannone. With half the race to go, Márquez took the lead and managed to escape.

It’s the 13th win in one season for the Repsol Honda rider, which theoretically means he topped Mick Doohan’s record of 12th wins in a season. However, it has to be mentioned, that Doohan had less races to compete in, so in percent the aussie legend still has most wins in one season.

Márquez’ biggest rival was, once again, Valentino Rossi. The Polesetter started very well, but fellow countrymen Andrea Iannone could prevail. Sadly Iannone was passed back and made a mistake, that made him go wide. At the end of the race he was listed as 22th and therefor last, after a really strong weekend.

Rossi, however, continued his great performance, despite the difficult conditions given on the track. With half the laps to go, it slightly started to rain, which made it tough for the riders to decided, whether they wanted to keep going with slicks or change the bike. Rossi, along with most of the field, decided to stick with slicks and it showed that it was the right decision. The 9-time world champion crossed the checkered flag as second and with that saved his vice-world champion title.

Dani Pedrosa followed behind him as third. The second Honda rider kept his third qualifying place, after losing two places at the beginning. He surely benefited from a mistake by Jorge Lorenzo, but Valencia had always been a good track for the spaniard. Unfortunately, more than a third place wasn’t possible, but a podium finish surely is a good way to end the season.

After a strong-looking Iannone, the Ducati team thought themself already on the podium, but nearly missed that chance. With Iannone’s mistake, it lay on Dovizioso and Crutchlow to secure a podium finish. Much to the dislike of fans and factory, it wasn’t to be.

Andrea Dovizioso started ahead of his teammate Crutchlow in fourth position and both of them leaded a strong race. They fought hard with each other, but especially the brit seemed to enjoy his last race with the italian bike and was ready to risk a lot. A fifth place was a good result, that gave him and his team a due farewell after a year of hard and not always fruiting work. Dovizioso, who stays with the italian team, finished ahead of him in fourth place.

Behind the two Ducatis, a fight between brothers continued through most of the race. Pol and Aleix Espargaró started as sixth and eleventh, but whereas the younger one lost several places at the beginning, his older brother made his way up. Ultimately, they fought for the second place and the younger one prevailed.

Aleix Espargaró finished the race as seventh and with that, once again, was the best „open“ rider in the field. His main opponent Stefan Bradl finished the last race for 2014 as eighth, with Michele Pirro and rookie Scott Redding completing the Top Ten.

Yonny Hernandez, Jorge Lorenzo and Randy de Puniet had to end the race earlier. De Puniet, who had received a wildcard to test the new Suzuki, struggled with the new bike in almost every training session, so his drop-out wasn’t surprising.

Also Yamaha factory rider Jorge Lorenzo had a tough time feeling comfortable with his M1 and therefor couldn’t attack as he might have wanted. With the slight rain starting, he was the only rider to enter the pits and change his bike. A gamble that hasn’t worked out well, since the track wasn’t wet enough for rain tires.

The spaniard tried to make best out of his wrong choice a few laps, but fastly realized it wasn’t working out. He came back into the pits and finished the race earlier, leaving the informal vice-world champion title to his teammate Rossi. 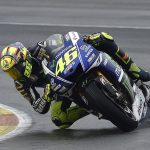