The first ever round of the FIA Formula E World Championship ended in a dramatic fashion after a last lap crash handed the win to Lucas Di Grassi. Lucas had been running 3rd up until the final turn, where leaders Nicolas Prost and Nick Heidfeld came together, launching Heidfeld into a scary flip into the wall. Franck Montagny drove an excellent race from 8th to take 2nd ahead of Sam Bird who was promoted to the podium after original 3rd place finisher Daniel Abt was demoted to 10th after not heeding a drive through penalty.

The Formula E roadshow was greeted with perfect conditions for the historic first round of the championship in Beijing, China. The one day spectacle started off with Brazilian drivers Lucas Di Grassi and Bruno Senna taking the fastest times in the 2 practice sessions.

Qualifying followed with the unique 4 group format. Nicolas Prost put in a fantastic lap to put his e.dams car on pole position ahead of the two Audi Sport Abt cars of Lucas Di Grassi and Daniel Abt. Karun Chandhok had held the fastest lap in his group and would start from a fantastic 4th for Mahindra. Team-mate Senna had a less than fantastic qualifying after a battery issue meant that he would not set a lap time and would start near the back of the grid. Jarno Trulli and Stephane Sarrazin also suffered a similar fate.

Prior to the start of the race, the first FanBoost result was given. The Fanboost is a system where race fans can vote in the build up to the race for their favourite driver to receive an extra 5 second boost to their cars. The 3 drivers with the highest amount of votes would receive the boost. The winners of the vote for the first round were Bruno Senna, Lucas Di Grassi and Katherine Legge.

Prost had an excellent getaway from the front of the grid as the 20 drivers charged their way down to the first corner. The Frenchman maintained the lead ahead of the FanBoosted Audi Sport car of Lucas Di Grassi. Heidfeld had a good start at the wheel of the Venturi car as he drove around the outside of Chandhok’s Mahindra. The two Andretti Autosport cars went wheel-to-wheel through turn 2, with Montagny giving Pic the bare minimum of room against the wall. Bruno Senna and Takuma Sato appeared to make contact behind them, with the Brazilian having to retire from the race after significant damage to his left-rear wheel. This would bring out the Safety Car.

Lap 5 saw the racing get back under-way, with Prost getting a good jump on the restart. Montagny appeared to have good pace in the Andretti car following a demotion from 5th to 8th in qualifying due to a pit error.  He and Sam Bird became the fastest cars on track as they tried to bridge the gap to the leading group.

A three way battle was being fought between IndyCar drivers Oriol Servia and Takuma Sato, who both passed the China Racing car of former NASCAR driver Nelson Piquet Jnr.  Servia got by Piquet into turn 2, which put Piquet on the back foot on the exit. Sato got around the outside of the Brazilian as a result.  Piquet was having none of it however as he went side-by-side with Takuma through the final turn and all the way down the start/finish straight and through turn 1. The inside line would fall to Piquet as he regained the place. He then managed to catch back up to Servia and pass him as well.

Jaime Alguersauri and Stephane Sarrazin were the first drivers to make their mandatory pit-stop at the end of lap 12 of 25. The top 6, Prost, Di Grassi, Abt, Heidfeld, Montagny and Chandhok, all followed them in at the end of the next lap. The unique car changes would see Prost maintain his lead, with Heidfeld jumping up 2 places ahead of Di Grassi, Montagny and Abt. Sam Bird briefly took the lead for Virgin Racing as he and Charles Pic elected to pit a lap later. They would both emerge in 6th and 8th; sandwiching Chandhok in 7th with 10 laps to go.

The battle for the lead was starting to concertina up in the closing stages of the ePrix. Prost continued to hold the lead, but it was now all about who could save as much battery as possible while maintaining the pace to lead the race. With just a few laps left, the top 7 cars were separated by just 8.7 seconds, with cars inches from each other for much of the race.  The top 2 began to ramp up their speed as the laps ticked down, with Di Grassi starting to fall back from Prost and Heidfeld. 8 tenths separated the WEC team-mates as they started lap 23 of 25. The lead would go down to a mere 6 tenths of a second on the next lap and would then hold station as they began their final lap of the race. The tension was mounting as Heidfeld drew a little closer, but then appeared to drop back slightly during the middle sector of the lap. It turned out that Nick was just preparing to give it everything on the run to the final turn.

The Venturi cruised up to the back of Prost’s car as they approached the final turn of the race. Heidfeld went to the inside, but Prost threw his car to the left in a desperate defence of what he hoped would be the first Formula ePrix win. The pair made contact, braking the left-front of Prost’s e.dams Renault and sending Heidfeld into a spin across the sausage kerbs. This threw the Venturi car into the air and subsequently into the barriers. The car came to rest upside down, with Heidfeld thankfully clambering out of the cockpit; a testament to the supreme safety standards imposed by the FIA. Prost would later be given a 10 place grid penalty for the next round in Malaysia. 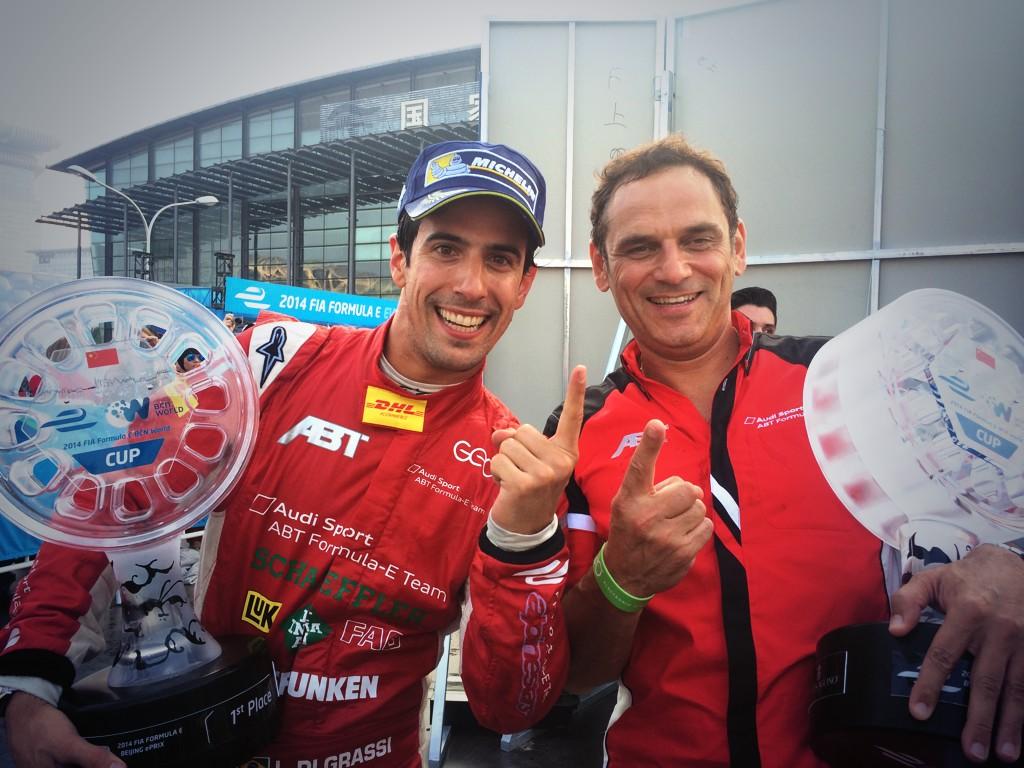 The pairs dramatic collision cleared the road for Lucas Di Grassi, who having falled back to save battery life had saved him from being involved himself. He simply drove past the stricken cars to take the first ever Formula E win in the Beijing ePrix! Franck Montagny had been on the back of Di Grassi for much of the final few laps but was unable to pass the Brazilian. He would settle for 2nd place, which was a great result after starting 8th.

Originally, it had been a double podium for the Audi Sport Abt team, with Daniel Abt joining race-winner Lucas Di Grassi in the top 3. However, prior to the podium, news broke that Abt would be demoted down to 10th place after failing to take a drive through penalty. This would put the Virgin Racing car of Sam Bird onto the podium after starting down in 11th place.

Andretti Autosport’s late signing Charles Pic drove a strong race to come home just off of the podium in 4th ahead of Mahindra’s Karun Chandhok, who lost positions in the last few laps due to his battery overheating. Jerome d’Ambrosio was the 3rd former Marussia/Virgin F1 driver to place in the top 10 in 6th place. Servia and Piquet’s seemingly race-long battle came to a close with the pair taking 7th and 8th respectively. Sarrazin and Abt would take the final 2 points paying positions, with Takuma Sato also earning 2 points for setting the fastest lap. This would be some consolation for the Japanese driver after finishing 4 laps down due to technical issues and ended up finishing 17th.

Jaime Alguersauri finished just outside of the top 10 in 11th place ahead of the two last corner retirements of Nicolas Prost and Nick Heidfeld. Michela Cerutti and Katherine Legge were the last two finishers who were a lap down in the 14th and 15th places. Home hero Ho-Pin Tung had a very dissatisfying race in the China Racing car. After starting from the pit-lane a few laps after everybody else, he took 16th place and was 3 laps down on Lucas Di Grassi. Sebastien Buemi had a similarly awful day. After suffering a rear-wing failure at the start of the race, he returned to the track in the hopes of getting 2 points for the fastest lap of the race, only to have the accolade taken away by 17th placed Takuma Sato. Buemi would be recorded in 18th ahead of the 2 lap 1 retirees of Jarno Trulli and Bruno Senna. 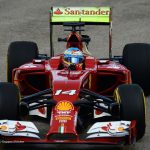