Lewis Hamilton has claimed pole position for tomorrow’s 2014 Italian Grand Prix at the Autodromo Nazionale Monza after beating team-mate Nico Rosberg by 2 tenths of a second. The Briton will start from the front for the first time since the Spanish Grand Prix in May after a host of issues over the summer cost him. The two Williams drivers will start from the second row of the grid, with Valtteri Bottas besting Felipe Massa by 2 tenths of a second.

With the sun baking the circuit, there would be no risk of rain interfering with qualifying like we had seen in Belgium. Lewis Hamilton had taken the fastest time in the final practice session, with team-mate Nico Rosberg failing to set a time after a gearbox issue. The problem did not warrant a change, meaning that the German wouldn’t suffer a grid penalty, but he would be on the back foot slightly heading into qualifying.

The two Marussia’s were the first out on circuit, but it was rival Kamui Kobayashi who had the early fastest time on his return to the cockpit after being replaced by Andre Lotterer in Belgium. The Caterham didn’t stay there for long however, as Rosberg soon took the top spot. Lewis Hamilton then went a few hundredths faster, before Massa then went slightly faster himself. The top 3 at this point were just a tenth apart. Rosberg then went back to first, but Hamilton would soon retake P1 by a tenth of a second and would remain there for the rest of the session.

Jules Bianchi had been impressive during the final practice session and was in the top 16 heading into the final 5 minutes. However a late spell of improvements by some drivers on the faster tyre meant that the Frenchman had to lift himself out of the drop zone. He was unable to do so after getting sideways through the Ascari chicane. To add insult to injury, Kamui Kobayashi put in a superb last gasp lap to take P19, faster than the Marussia pair and team-mate Ericsson. The two Lotus cars joined the usual suspects in the drop-zone after a shocking weekend so far where both Grosjean and Maldonado have struggled to stay on the track.

Mercedes and Lewis Hamilton maintained the advantage in the second session of qualifying, with Rosberg second once more. The German reduced the 1 tenth gap from Q1 down to just 4 hundredths of a second. The two Williams maintained their runner-up positions in 3rd and 4th.

Home heroes Ferrari had seemed strong in practice on Friday and earlier on Saturday, however their pace seemed to slow slightly during qualifying. Kimi Raikkonen was struggling in his car, especially in the Della Roggia chicane. On his first run, he went too wide on the exit and just caught the gravel with his left rear tyre. He aborted that lap to prepare for a second and final run in the closing moments, but he locked the right front and went into the escape road. He didn’t have a chance to get his car out of the drop-zone and would be disappointingly eliminated in front of the Ferrari home crowd.

Daniil Kvyat was in the top 10 in the last few moments, but was eliminated in a last gasp improvement by fellow rookie Kevin Magnussen. Kvyat was just outside of the top 10 in P11, but will start from 21st on the grid after becoming the first driver to receive a 10 place grid penalty for using a 6th engine this year. His team-mate Vergne would also join him in elimination along with Nico Hulkenberg and the two Sauber cars.

With the battle looking tight between the two Mercedes for pole position, Lewis Hamilton was praying that he would be able to complete qualifying with no issues unlike previous events. Rosberg was the first to set a time with a 1’24.5; matching the fastest time of the weekend so far. But it wasn’t enough to beat Hamilton who came through to go an impressive 4 tenths quicker than his team-mate. Rosberg had the best time of anyone in the first sector, but Lewis was much better through the final 2 sectors.

The clock had hit zero as the drivers finished their final laps of qualifying. Nico Rosberg had set the fastest time again through second one, but was a few thousandths down on Lewis in sector 2. In the end, he would lose another two tenths on the run through Ascari and Parabolica and would be unable to beat Hamilton’s time on his first run. Hamilton was on a final lap, but in the end there was no improvement. This wouldn’t matter as Hamilton had done enough to claim his first pole position in 4 months.

Bottas and Massa tried their best to beat the Mercedes cars, but would have to settle once more for 3rd and 4th on the grid. The Williams duo showed excellent race pace during practice and will be hoping to take the fight to the Silver Arrows. Another two team-mates would occupy the 3rd row on the grid, with Kevin Magnussen beating Jenson Button on his final lap to take 5th on the grid. Fernando Alonso was the highest placed Ferrari driver in 7th place ahead of long-term rival Sebastian Vettel and his Australian team-mate Daniel Ricciardo; winner of the last two Grand Prix. Sergio Perez, podium finisher at Monza in 2012 for Sauber, would complete the top 10 in his Force India.

Lewis Hamilton, Italian Grand Prix pole-sitter: “I feel excited for tomorrow. I’m very proud of my guys on my side of the garage. They have been through the difficult times with me. They’ve done a remarkable job bouncing back, so we’ve done this as a team and it’s great to have another 1-2 for the team.”

Nico Rosberg, 2nd placed qualifier: “We’re always going to be faster and slower in different parts of the lap relative to each other. Relative to my own lap it was an OK lap and from that second position is still good for tomorrow. In the race anything can happen and we need to work towards the race and get a good strategy and have a good race. For the team again, even at a track like Monza, even coming here and being so dominant. There’s still the race tomorrow but it’s still really awesome for the team.”

Valtteri Bottas, 3rd placed qualfier: “From Friday to today they [Mercedes] had a bit more pace. We hoped we could be close to them. I think we have a solid race pace. “ 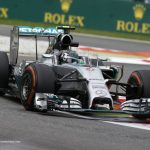