Lewis Hamilton has won the 2014 United States Grand Prix after starting from 2nd place. The British driver passed Nico Rosberg in a late out-breaking manoeuvre to take the lead and give himself a 24 point lead in the championship with 2 races to go. Rosberg finished P2 with Daniel Ricciardo taking the final spot on the podium for Red Bull.

A 2 stop, 56 lap race lay ahead of the drivers for the 2014 United States Grand Prix. Thankfully, all the suspicions of some teams boycotting the race did not come to fruition. All 18 cars, minus Caterham and Marussia, took to the grid for the race.

Nico Rosberg had the best start off of the front row as he scampered into the lead. Hamilton made a decent getaway but still went slightly defensive to cover off the two Williams drivers on the second row. Felipe Massa managed to get a better start than his team-mate to pass him up the inside into the first turn. Despite having decided not to boycott the race, one Force India was out before the end of lap 1. Sergio Perez was trying his best to gain positions in what he considers the closest thing to a home race. He tried to get up the inside of Sutil’s Sauber into the double left of turn 15, but instead he rear-ended Raikkonen’s Ferrari and then clobbered Sutil. The damage was significant. Debris showered the circuit and both Perez and Sutil would retire from the race. The safety car was bought out.

A number of drivers near the rear of the field elected to pit straight away in order to get their mandatory pit-stops out of the way. This was made even more of a good decision by the fact that the medium tyre was a better race compound, so moving onto them with no real loss was an obvious move. Sebastian Vettel even pitted twice, once to get his mandatory stop out of the way, a second to move back to the mediums tyres that he had started on.

Rosberg got a good start when the safety car came in at the end of lap 4, with the German holding a 0.7 lead by the end of the restart lap. By the end of the next lap, the gap was 1.1 seconds. Valtteri Bottas tried his hardest to get back past his team-mate into turn 1, but Massa managed to resist. Fernando Alonso wasn’t able to do the same as Ricciardo jumped past him in his Red Bull.

Hamilton managed to start closing back in on Rosberg by the end of the first 10 laps to get to within 0.6 seconds of his team-mate. He strangely fell back over 2 seconds on lap 15, with Rosberg electing to pit. Valtteri Bottas pitted from 4th a lap later and rejoined just ahead of Ricciardo who had pitted earlier. The Australian had attempted to execute the ‘undercut’ on the Finn and it just about worked as he used his extra momentum to get by the Williams on the outside. Lewis pitted on the next lap and rejoined 2 seconds behind his team-mate.

Once again, as the two Mercedes drivers got further into their stints, Hamilton seemed to creep back up to the gearbox of Rosberg. By lap 23 he was well within the DRS zone of Rosberg, but slightly too far back to make the move into turn 12. The next lap however was different. It was almost a mirror image of his 2012 pass on Sebastian Vettel as he shadowed his prey all the way down the straight. He pulled it to the inside and appeared to catch Nico napping as his defence came far too late. There were bare centimetres between them, but Hamilton passed him nevertheless. Hamilton had the lead. Within a lap he had pulled over a second on him.

Meanwhile near the back of the top 10, Sebastian Vettel was having a nightmare race. He had started from the pit-lane thanks to a whole power-unit change and had hoped to fight his way through the field. Instead, he was being passed by Romain Grosjean’s Lotus! The Lotus cars appeared to have improved for this weekend as Pastor Maldonado was into the top 10 as well. The Venezuelan hadn’t scored any points all season and was looking to change that, but he would have to take a time penalty at the end of the race for speeding in the pits.

The second and final scheduled pit-stop phase began as the drivers entered the final 26 laps on lap 30. Jenson Button was instructed to pit, but then told not to suddenly as his team-mate Magnussen had pitted instead. He was then told to come in to the next lap. Jenson still decided to make sure that was the case as he replied sarcastically, “Are you sure this lap? Are you sure?”

Daniel Ricciardo once again attempted to undercut a Williams as he pitted from 4th a lap earlier than Felipe Massa. The Williams crew had a slightly delayed stop as Massa was held in his box, which allowed Ricciardo to get through into the top 3. The Mercedes pit-wall decided it was best to pit Hamilton and Rosberg slightly early, despite their tyres being in good condition, to make sure they covered off Ricciardo and Massa. Hamilton pitted first with a 2.9 second stop, with Rosberg following a lap later with a 3.2 stop. The gap was around 3 seconds between the two title rivals and it was now a sprint to the finish to see who would claim the win.

The battle for the final few points positions was shaping up to be a cracker. Sebastian Vettel tried to lunge his way up into 9th past Kevin Magnussen’s McLaren, but his car wasn’t compliant as he slid wide and gave the rookie his place back. He managed to make it stick on the next lap. He then had Fernando Alonso, who had rejoined just ahead, to deal with as he ducked his car up the inside of the Ferrari into turn 1. He held onto the outside through the fast turn 2 to claim the inside line and the position into turn 3. Within a few laps however, he was struggling! His tyres appeared to die as a load of cars breezed by. He had no choice but to pit and rejoin in 14th place and see where he could get up to in the final dozen laps.

Thankfully for Vettel, the gap between 7th and 14th was only 10 seconds as the race drew to a close. Drivers were pushing as hard as they can, with some fighting to stay on the grid next season. Jean-Eric Vergne was a prime example as he pulled off a huge lunge into turn 1 to pass Romain Grosjean. The pair made a little contact on the exit of the turn, must to Grosjean’s disapproval. Vergne then set about getting past Jenson Button, which he did cleanly with 3 laps to go, but soon he was demoted back into 9th as Sebastian Vettel charged through, with the fastest lap in his pocket, to take P8. Vettel was now in the zone as he closed in on Kevin Magnussen to take 7th on the penultimate lap. He was also approaching his long-term rival Fernando Alonso, but he ran out of laps to take the position from the man he may be replacing next year.

Back at the front, the battle hadn’t been wheel-to-wheel, but the two Mercedes drivers had been trading fastest sectors for the whole final stint of the race. The gap between them had fluctuated around 2 to 3 seconds, but Rosberg was unable to get into a position to pass his team-mate. Lewis Hamilton would claim his 5th win in a row, his 10th win of the season and his 32nd win of his career. This would make him the most successful British F1 driver having equalled the record in Russia. Nico Rosberg would take 2nd place, but he was now 24 points behind Lewis with 2 rounds and 75 points left on the table.

Daniel Ricciardo managed to hold off a late charge by Felipe Massa to claim another podium for Red Bull, with Williams finishing 4th and 5th ahead of Fernando Alonso’s Ferrari. Sebastian Vettel’s late race charge gave him 7th place after starting from the pit-lane. Kevin Magnussen took 8th place for McLaren ahead of the battling Toro Rosso of Jean-Eric Vergne. Jean-Eric would be demoted a place after a 5 place penalty for his contact with Grosjean.

Pastor Maldonado had crossed the line to take 9th place after an aggressive pass on Vergne on the last lap, but a five second penalty would demote him one place to 10th. He would regain 9th after Vergne’s 5 place penalty pushed him behind Pastor. The performance was the best he has given this season as he took his first points of the year. Team-mate Romain Grosjean would finish just outside of the points in 11th place ahead of Jenson Button in 12th and Kimi Raikkonen; the Ferrari driver having a dismal race. Esteban Gutierrez and Daniil Kvyat were the final two finishers, with the latter having been on course for a points finish until hitting debris in the final few laps.

3 drivers failed to finish the race. Nico Hulkenberg retired with engine issues as he joined team-mate Sergio Perez and his victim Adrian Sutil in an early bath. (Not literally.)

Race winner, Lewis Hamilton: “I have an incredible team and an incredible car and I had a great opponent today. It is such a privilege to represent my country and to be top of the driver wins is quite special. The car was great today.”

2nd place, Nico Rosberg: “It kind of sucks for me today. It took too long for me to find my rhythm. Once Hamilton got by I found my rhythm but that was too late.”

3rd place, Daniel Ricciardo: “We are doing what we can. We all had a great weekend so thank to all the fans. It’s a pleasure to come out here. Thanks to Red Bull for giving me a package to fight for the podium and I’m really happy with third place. You can overtake here. I got Magnussen and then Alonso on the restart so it wasn’t too boring out there.”

The drivers now have just a week break until the penultimate race of the season in Brazil, the circuit where on this day 6 years ago, Lewis Hamilton claimed the 2008 world championship. He won’t be able to repeat that feat next weekend as he has a 24 points lead in the championship. Thanks to the double points finale in Abu Dhabi, Hamilton could win in Brazil with Rosberg not finishing and still lose the title in Abu Dhabi should he retire and Rosberg win. 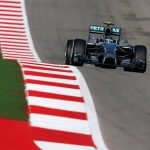 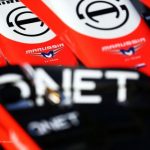