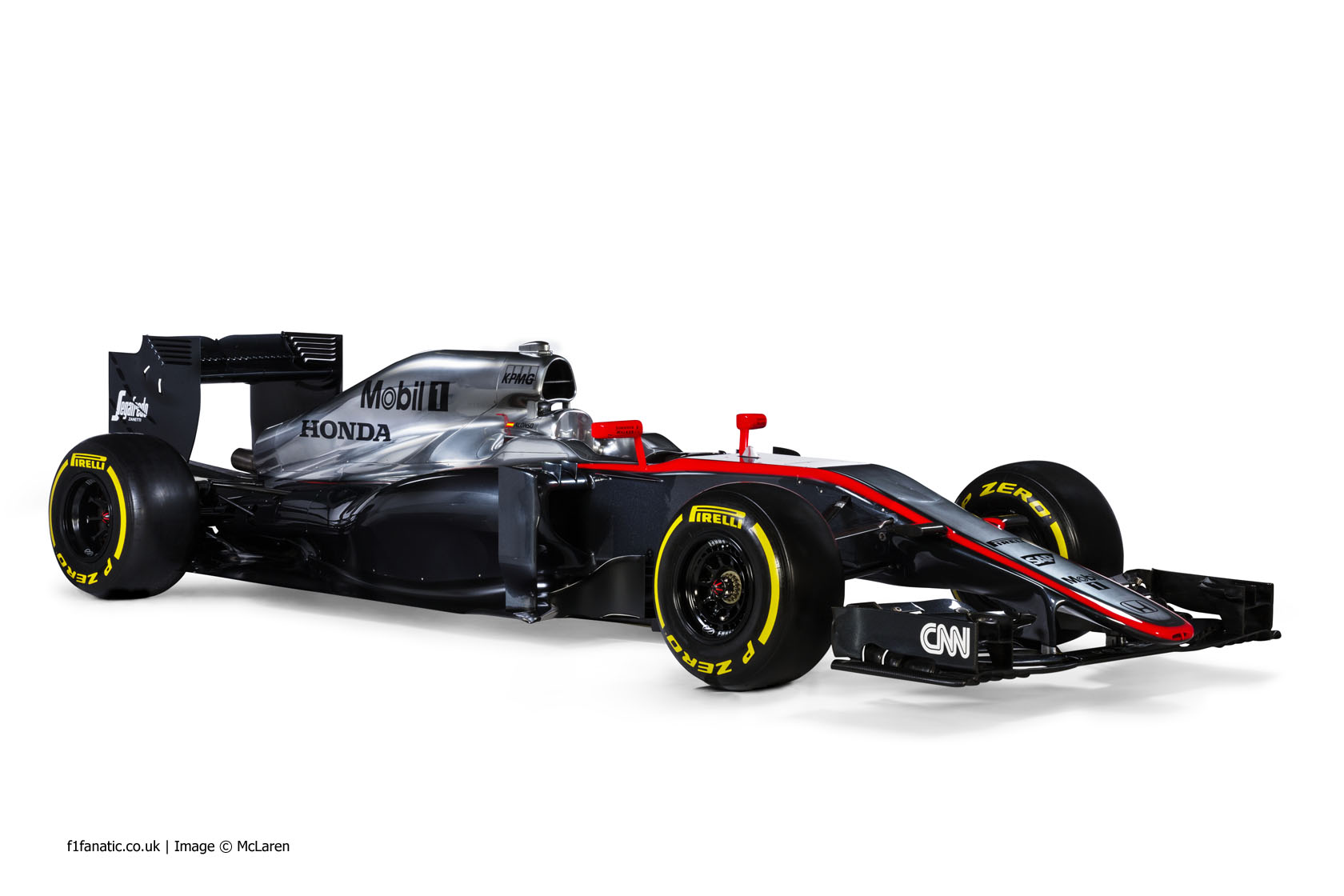 McLaren have revealed their 2015 Formula One car, the first Honda-powered McLaren since 1992, that will be driven by Jenson Button and Fernando Alonso in this year’s championship. The theme of evolution rather than revolution continues as the MP4-30’s main significant change is that of the front wing, which has been altered to conform with 2015 regulations.

The return of the McLaren-Honda partnership, which won both the drivers’ and constructors’ championships for four consecutive years between 1988 and 1991, has been anticipated by fans across the world since it was announced in 2013.

“I was team principal all those years ago,” said group CEO Ron Dennis, “and while I don’t tend to like looking back to the past our previous record of sustained success was certainly instrumental in creating the confidence to make the decision to partner with Honda again. Now, there’s real hunger to demonstrate the capabilities of the huge talent pool we share between us, and I’m totally committed to driving progress and achieving further success.”

Honda’s head of motorsport Yasuhira Arai said: “As you can see with the new MP4-30, we’ve dedicated ourselves as one team with McLaren to creating a new car that compromises on nothing – either power or aerodynamics.

“Yet, in the midst of the excitement, both myself and our engineers are 100% focused in both Sakura and Milton Keynes to prepare for Jerez and beyond. We’re confident that the technology is there and I’m looking forward to see how it will perform.

“We’re about to commence a long season, with numerous challenges but Honda is determined to face them head-on. After all, we’re here to drive Formula One’s technology forward and give our fans a thrilling ride.”

Jenson Button, who enters his 6th year driving for the British team, believes that this car is unique from those that have come before it:

“This year’s car is very different to the last two years,” said Button. “I know all of the mechanics are very excited about working on it. They say everything just fits and it just works in terms of it feels like on package instead of different departments building different parts of the car and then putting it together. So there’s a really good vibe about the place, people have a good feeling about where the car is in terms of engine.”

“We obviously have a lot less experience than the other engine manufacturers so it’s going to be a tough winter testing programme. We’re going to get a lot of experience and the great thing about Honda is they’re very good at listening to what you have to say in terms of drivers’ feedback, if you tell them you need something, they’ll be on it straight away and will either have a fix or an improvement for the next test.”

Fernando Alonso, who returns to the team for the first time since a problematic year in 2007, will be the first man to drive the MP4-30 when the first pre-season test gets under-way in Jerez on Sunday February 1st.

“I think the first couple of days with the car we will discover many things and we need to be ready to react to all the problems we may face and be ready with an answer from everybody all together,” Alonso explained.

“I think it’s going to be a learning year and a learning process for all of us. Obviously we are here to win so the goal is to win, there is nothing more than that but I think we need to be ready to work as a team, very united to achieve that win as soon as possible.”

Alonso’s old team, Ferrari, will unveil their 2015 car which will be driven by Kimi Raikkonen and new-signing Sebastian Vettel. The second Ferrari-powered team, Sauber, will also reveal their car which is expected to be an all-new car for an all-new line-up of rookie Felipe Nasr and former Caterham driver Marcus Ericsson.