Nico Rosberg has claimed pole position for his home race at Hockenheim after team-mate and title challenger Lewis Hamilton crashed out in the first session. The Briton will have to fight his way through the field tomorrow from 15th place at a track that has only ever seen 3 drivers win from outside of the front row.

The two Williams secured 2nd and 3rd, with Bottas beating team-mate Massa to the second front-row spot. Kevin Magnussen will start alongside Massa, as the Dane impressively out-qualified the Red Bull pair of Ricciardo and Vettel.

After topping the final practice session early on Saturday morning, Nico Rosberg went into the first session of qualifying hoping that he could take pole position for his home Grand Prix.

Jenson Button set the early pace in his McLaren, with Valtteri Bottas soon taking the top spot, a few tenths ahead of an early effort by Lewis Hamilton. Nico Rosberg was yet to set a competitive lap time despite having two attempts; his first ruined after a mistake at turn 1, the second after a big lock-up at turn 2.

Nico wouldn’t be able to complete a lap just yet, as team-mate Lewis Hamilton crashed heavily into the barriers in the stadium section. Replays showed that the car swapped ends in the braking zone, leading to a collision measuring 30G. Hamilton was understandably winded, but was able to get out of his car and walk away with just a few bruises.

The session was red-flagged with just 7 minutes to go. Upon the restart, Rosberg wasted no time in trying to get a lap in. He put in a 1:17.6 to take the top spot away from Valtteri Bottas which would see him through into Q2 comfortably.

Hamilton managed to get through into the second qualifying session as had set a quick enough time before his crash. The usual suspects in the Marussia and Caterham’s were eliminated, with Marcus Ericsson starting last after failing to set a lap due to a hydraulic issue. Jules Bianchi managed to out-qualify Pastor Maldonado’s Lotus to take 18th, with Adrian Sutil also in the drop-out zone.

With Hamilton’s car too damaged to take to the track, Q2 would be a battle to see who would go through to Q3 and who would complete positions 11 to 15.

German driver Nico Hulkenberg set the early pace for Force India in the second session, but normal service was shortly resumed when Nico Rosberg took the top-spot; closely followed by the two Williams cars of Bottas and Massa.

The second qualifying session proved unlucky for 3 of the 4 most recent F1 world champions. Hamilton was already out and would be joined by 2007 and 2009 champions Kimi Raikkonen and Jenson Button. Jenson had been complaining about the poor handling on his McLaren and was subsequently knocked out whilst team-mate Magnussen moved on into Q3.

Jean-Eric Vergne, Romain Grosjean and Esteban Gutierrez were also eliminated. Gutierrez originally qualified in P14, but a 3 place grid penalty for contact with Maldonado in Silverstone put the Mexican down into 17th place instead.

With the track still scorching, Nico Rosberg, Kevin Magnussen, Fernando Alonso, Daniil Kvyat and the two Williams’, Red Bull’s and Force India’s would be in the fight for pole position.

Sadly, it seemed as though we would be denied of any fight for pole position. Rosberg wouldn’t have to fight his team-mate in the session and it looked unlikely that anyone else would be able to challenge him. In the end, Rosberg’s first effort was enough to secure a home pole position for the first time.

Valtteri Bottas tried his hardest to displace the German from pole on his final run. He set a fastest middle sector but ultimately dropped 2 tenths and had to settle for second place. Team-mate Massa will line up just behind him ahead an impressive effort by rookie Kevin Magnussen.

The two Red Bull’s qualified 5th and 6th, with Daniel Ricciardo out-qualifying German Sebastian Vettel once again. Fernando Alonso will take a disappointing 7th place on the grid ahead of Daniil Kvyat. The Force India pair complete the top 10, with Hulkenberg beating Perez by just a few thousandths of a second.

*3 place grid penalty for Gutierrez after causing a collision in the British Grand Prix.

Mercedes’ Nico Rosberg, who starts on pole: “For now, it’s been going really well. Home race, to be on pole is fantastic. I would have preferred if it was an open fight with Lewis so I’m less happy as a result. But it’s a fantastic day but there are no points today. There is still a long way to go tomorrow. For tomorrow, it is supposed to be a bit colder, so it should make it easier on the tyres. The weather could play a role, so I just need to take it as it comes.”

Williams’ Valtteri Bottas, who starts second: “I’m happy with the result we got as a team, well done to everyone, but Mercedes is still ahead. The lap I did in the end, I made no mistakes, it was a really nice lap. I felt I got everything out of the car today.”

Felipe Massa, who will start third: “We managed to put a lap together even though we were not able to have the perfect car. We still did a very good lap and I’m quite happy with the result and our car. In the race conditions will give a different feeling of the car but I will try to do a very good job.” 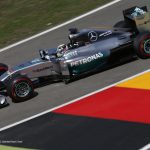