Sebastian Vettel has won the 2015 Singapore Grand Prix after leading every single lap from pole position. He led home his former team-mate Daniel Ricciardo and current team-mate Kimi Raikkonen to take his 42nd Grand Prix victory. Mercedes continued to not have their leading pace, with Rosberg taking 4th and Hamilton retiring with a loss of power. He may have been a factor in the closing stages had he not retired for the first time this year. 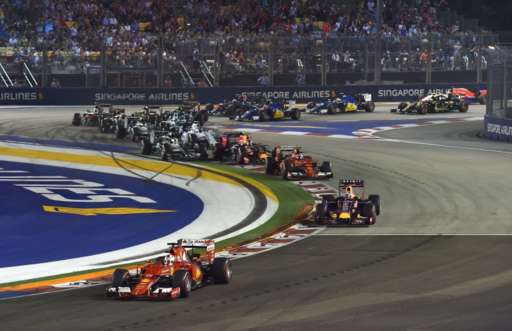 After the sensational performance by Ferrari and Red Bull in qualifying yesterday, Mercedes were in the unfamiliar surroundings of being on the third row of the grid.

For Nico Rosberg, the troubles didn’t end there as he suffered a somewhat similar issue with starting his car like he had in last year’s race. Luckily for him, the team were almost certain that they had solved the issue before the start.

Sebastian Vettel got away cleanly from pole position to lead down into turn 1 ahead of Daniel Ricciardo and Kimi Raikkonen. Daniil Kvyat came under attack from Lewis Hamilton but he managed to fend him off through the first few corners. Valtteri Bottas tried to pounce on Nico Rosberg but the German defended well to keep him behind. Max Verstappen stalled from 8th on the grid and had to be pushed back to the pits. The Toro Rosso mechanics got him back going, but he was a lap down by that point.

It was reminiscent of 2011 up at the front, with Sebastian Vettel streaking away in the opening laps to get a lead of 4 seconds by the end of lap 2. He continued to extend the gap over the next couple of laps to his ex-team-mate Daniel Ricciardo; with the second Ferrari of Kimi Raikkonen hanging onto the coat tails of Ricciardo. By lap 7, Vettel eased off his rapid pace and began to start saving his tyres; with Ricciardo matching his pace behind.

The first stint of the race wasn’t the most exciting affair as drivers sought to keep their tyres going until their first stop. Grosjean, Alonso, Sainz, Ericsson and Maldonado all pitted fairly early on laps 10 and 11; with Alonso being held up by Maldonado as he tried to exit his pit box. He emerged just ahead of Grosjean and tried to keep him behind, but ultimately the Frenchman would pass with the aid of DRS into turn 5.

The front-runners made their first stops at the start of lap 13, with Daniil Kvyat pitting from 4th. He exited the pits and at that precise moment, Felipe Massa and Nico Hulkenberg made contract at turn 3 as Massa exited the pits. Hulkenberg looked to not give Massa any room on the inside of turn 3, with the contact sending Hulkenberg into the wall. The virtual safety car was deployed, with the remaining drivers who hadn’t pit taking the opportunity to do so.

Vettel maintained his lead at the front after his stop, with Ricciardo and Raikkonen maintaining formation behind him. Daniil Kvyat was massively unlucky to have pitted just as the virtual safety car was deployed. Because of this, he lost two positions to Lewis Hamilton and Nico Rosberg; who were now 4th and 5th. Additionally, both Mercedes drivers had fitted the slower compound soft tyre instead of the super-soft on the rest of the leaders. 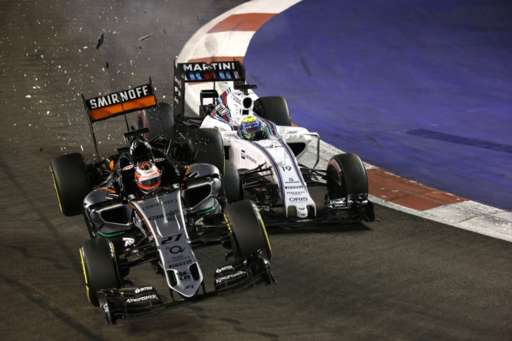 Soon after, the actual safety car was deployed due to the sheer amount of debris at turn 3, with the safety car period finally coming to an end at the end of lap 18.

Sebastian Vettel got away reasonably at the front as the green flag flew in the air once more, with Ricciardo holding on behind him in 2nd. The Australian was right on the gearbox of the Ferrari just before the restart in anticipation, with the Red Bull driver being rewarded for keeping on his toes. He was still within a second of Sebastian at the end of the lap. The top three remained much closer to each other compared to the start of the race, with 4th placed Hamilton commenting over the radio how Sebastian was ‘backing up’ Ricciardo and Raikkonen.

Hamilton soon had much more pressing issues, as on lap 26 he reported that he had lost power in his Mercedes. Down the start finish straight he was passed by team-mate Rosberg, with Kvyat and Bottas following suit shortly after. The team were instructing Lewis to perform several potential fixes but none of them appeared to work. The team soon diagnosed a potential throttle issue as he was not able to go to full power.

Soon Hamilton was out of the points as the team continued to try and fix the problem. Felipe Massa was having issues at the same time, with the team soon telling him to pit and retire the car after suffering gear issues. Shortly after, Hamilton followed his former championship rival into the pits and into retirement for the first time since last year’s Belgian Grand Prix. Yet another driver retired moments later, with Fernando Alonso unexpectedly pitting before being wheeled into the garage; with a gearbox failure being cited as the cause.

Back up at the front, Sebastian was back into full attack mode. With 30 laps to go, he had pulled ahead by 4 seconds after seemingly saving tyres at the start of the stint. Raikkonen was dropping back from Vettel and Ricciardo, but 4th placed Rosberg wasn’t catching him. The Mercedes driver was 11 seconds off of Raikkonen; who occupied the final podium position. Daniil Kvyat had been right on the back of Rosberg before making his final stop; which was slightly longer than expected after issues putting on the right-rear tyre. 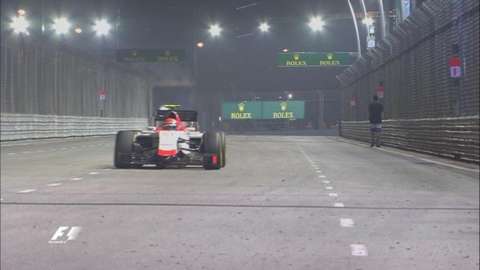 The streets of Singapore are usually bustling with traffic and pedestrians, but they are all, of course, cleared off of the roads during the Grand Prix weekend. This information seemed to have gone amiss for one man, who appeared on the track on lap 37 as he casually strolled along the side of the circuit; much the dismay of Sebastian Vettel who reported the incident of the radio. What’s more is that the intruder had caused a safety car which bunched the field up and decimated Vettel’s lead. All the leaders made their final stops under the safety car, with all the drivers now good until the end on the soft tyre compound.

The safety car came in at the start of lap 41; 20 laps to go. Vettel got away much more this time around and had a lead of a second ahead of Ricciardo at the end of the lap. Further back, things were kicking off. The two Manor cars were right in the mix on the restart having not taken their opportunities to unlap themselves under the safety car. As a result, a few cars got backed up towards each other. Jenson Button was right behind Pastor Maldonado at turn 17, but soon he got too close and broke his front wing; forcing him to pit and ruining McLaren’s only chance of points in the race. He would retire later on with gearbox overheating issues. This would be McLaren’s 4th double retirement of 2015.

The safety cars may have ruined some peoples chances, but it massively helped the Toro Rosso drivers. At one stage, the pair were propping up the field in 19th and 20th but now they were running inside the points in 9th and 10th; with Verstappen right on the gearbox of 8th placed Grosjean. He had pulled off a tidy move on the other Lotus of Maldonado a few laps previously, before pulling off a sweet move in the middle sector by forcing Grosjean to go defensive and therefore slower. Sainz followed his team-mate through at turn 1 with a daring late-braking move, but his move was put into question after running off track.

Daniel Ricciardo was starting to catch Vettel in the lead of the race, with the Australian setting the fastest lap of the race to draw within 2.8 seconds of Sebastian. The gap was starting to ebb and flow however, with Sebastian soon bringing the gap back over 3 seconds. 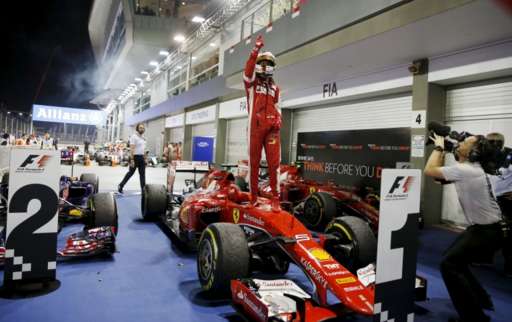 The challenge seemed to have been abated for Vettel as he started the final lap of the race, with the Ferrari driver soon coming through to take his 42nd Formula One Grand Prix victory and his 3rd of the year; a sensational performance having led from start to finish. Ricciardo took 2nd and spoiled Vettel’s chances of taking a Grand Chelem by stealing the fastest lap of the race in the closing stages. 3rd place went the way of Kimi Raikkonen, who never seemed to have the pace to challenge those ahead, but equally he was never under pressure to keep the position.

4th place would go to Nico Rosberg, who would close to within 41 points of the championship lead following his team-mates’ retirement; still a large gap to bridge in the final races of the season. He will also have to worry about being challenged by Sebastian Vettel who is now just 8 points behind him in the standings. 5th place was Valtteri Bottas in the Williams, who nursed his car home with a gearbox glitch in the final few laps. 6th was Daniil Kvyat, who will be disappointed having possibly been able to take a podium before bad luck befell him with pit-stops.

7th was Sergio Perez just ahead of the two Toro Rosso drivers. Max Verstappen lead the duo across the line despite having been instructed to let team-mate Sainz through during the final 2 laps. He will have some explaining to do to his team as to why he disobeyed the team orders, but both drivers drove fantastically to recover from the back of the field. Completing the top 10 was Felipe Nasr, who snatched the final point away from Romain Grosjean in the last few laps.

5 drivers failed to finish the race, which allowed the Manor drivers to take 14th and 15th place; with Alexander Rossi ending his first Formula One race ahead of team-mate Will Stevens despite not having his team radio for the second half. 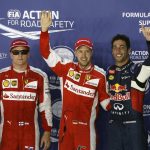 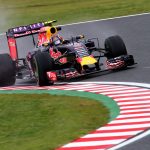