As I’ve already noted elsewhere, the Stanley Cup Finals are about to begin. But, what is this trophy, where is it from, what is its history? Good questions, which I’ll try to answer by presenting its history, traditions, statistics, curiosities, trivia. A general introduction for what is the oldest trophy in North American sports. 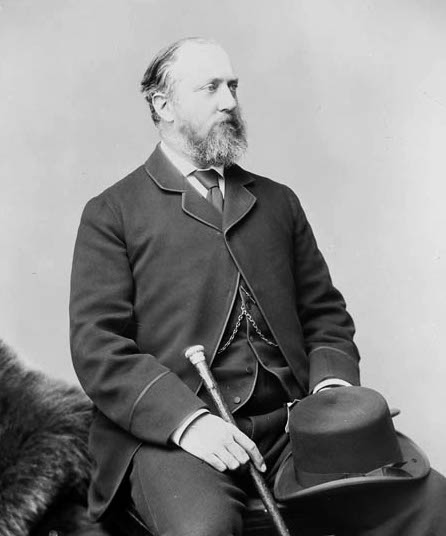 Origins and name. The cup was purchased by Sir Arthur Frederick Stanley, better known as Lord Stanley of Preston, sixth Governor General of Canada. Stanley got interested in hockey thanks to his children, who were amateur players in Ottawa; and so he decided to buy a trophy meant for the best Canadian hockey team. The cup was bought for 10 or 11 guineas (according to various sources), which is, at present, about 50 dollars. In the beginning, the Cup was contested by amateur teams, but in 1909 it became a trophy for professional teams. The trophy was established as a challenge cup: it wasn’t won necessarily at the end of a tournament, but it was put on the line whenever the defending champion was challenged, under certain terms and conditions. In 1914, the PCHA champions Victoria Aristocrats challenged the NHA Champions Toronto Blueshirts, cup holders at that time, making the Stanley Cup the final prize for the “Champion of Champions” among North American leagues. The PCHA merged with the WCHL into the WHL (Western Hockey League), and in 1926, when the WHL folded, the Cup became an exclusive of the NHL (though it was made official only in 1947). 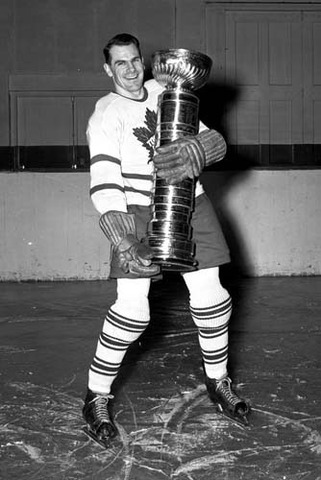 Shape and size. The cup, when purchased, had a bowl-like shape, 18.5 cm tall and with a diameter of 29 cm. Afterwards, the shape changed, thanks to the addition of supporting rings to engrave the names of the winners. In the 40’s, the yearly addition of a ring gave birth to the so-called “stovepipe”. In the 50’s, to avoid an excessive growth of the basement, rules were fixed, and those rules are currently in use. The basement is made up of five equal rings; each of these rings has thirteen spaces to engrave names of the winners. The Cup is 89.5 cm tall and weighs about 16 kg, while the basement has a diameter of 43.8 cm.

Uniqueness. The Cup is unique; that is, unlike the other trophies, every year the Cup is passed on to the winners, instead of creating a new copy for them. However, three Stanley Cup actually exist: a replica of the original 1893 trophy; a replica of the current one (both of those are exposed at the Hockey Hall of Fame in Toronto); and of course the “real” one.

Name engraving. One of the peculiarities of the Stanley Cup is the engraving of the names of the winners on it, a unique tradition among all North American professional sports leagues. The first team to put their names on the Cup were the Montréal Wanderers in 1907; but it has been a regular tradition since 1924. The Cup was then given some basement rings, to allow the yearly engraving; each ring is completed in 13 years. When all rings are full, the oldest one is removed and sent to the Hall of Fame, while the Cup is given a new one. 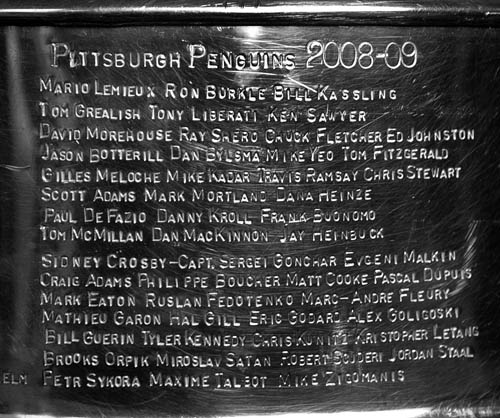 In 1998, the Detroit Red Wings put 55 names on the Cup; afterwards, the League has allowed a maximum of 52 names per year. The following people have the right to have their name on the Cup: the staff members (like the president and his/her staff, the general manager, the head coach, his/her assistants, the trainer) and all the players who meet certain criteria (they must have played either 41 regular season games, or one game in the Finals). The criteria are not so strict: a team can petition the League for a certain name to be put on the Cup, even if he didn’t satisfy completely the criteria (for example, a player who played fewer that 41 games due to injury, or a late-season acquisition whom the team deems a valuable player).

There are several traditions. For example, people have been celebrating by taking a sip from the Cup since 1896 (and that’s why the cup is also nicknamed “The Holy Grail“). The Captain of the team has been taking a ceremonial victory lap with the Cup since 1950, when Ted Lindsay did so for the first time (Lindsay said in an interview that he did it to allow fans to have a better view of the Cup). Every winning team has 100 days in the off-season to take the Cup with their players during their daily routine. Every player has the right to be the sole holder of the Cup for at least 24 hours. Players have been carrying he Cup with them since the 1980’s, but the traditon was definitely established by the 1994 New York Rangers.

Notable exceptions. There have been some particular exceptions to the “traditions of the Captain”.

In the Summer of 1997, Vladimir Konstantinov, defencemen for the Detroit Red Wings, was paralyzed in an automobile accident. Detroit won again in 1998; the captain Steve Yzerman took the Cup, but instead of parading around with the Cup, he put it on Konstantinov’s lap, pushing his wheelchair for the victory lap.

In 2001, when the Colorado Avalanche won their second Cup, the captain Joe Sakic took the cup but didn’t hoist it over his head, letting alternate captain and NHL legend Ray Bourque do so. Bourque won his one and only Stanley Cup in his 22nd season (his final one), at 40 years of age.

Statistics and winners. The first team to win the Cup was the Montréal Amateur Athletic Association in 1893. The WHL Victoria Cougars were the last non-NHL team to win the trophy, doing so in 1925.

The Montréal Canadiens have won the most trophies, 24. Second in line are the Toronto Maple Leafs with 13 victories, but the Leafs have also the longest drought: their last success was in 1967, the last season of the Original Six era.

The Leafs were the first team to win three times in a row (1947-1949), while the 1959 Canadiens were the first team to reach four (and then five, the following year) straight victories. The only other team with four straight Cups is the the New York Islanders, and no other theam besides Canadiens, Leafs and Islanders has ever won three in a row. As well, 12 teams have yet to win their first Cup; some of them are recent expansion teams (like the Wild and the Blue Jackets), while others are a little older, like the Blues (1967) and the Canucks (1970). Nine different teams have won the Cup between 2003 and 2012, and for some of them it was their first victory (Tampa Bay 2004, Carolina 2006, Anaheim 2007, Los Angeles 2012).

The first European-born players trained in Europe were Stefan Persson e Anders Kallur, from Sweden, who were with the Islanders in 1980. (Stan Mikita, who was with the 1961 Blackhawks, was born in Czechoslovakia but raised in Canada). Two European players captained their team to the victory: Swede Nicklas Lidström in 2008 (Detroit) and Slovak Zdeno Chára in 2011 (Boston). The first American-born captain to win the Cup was Derian Hatcher, winner in 1999 with the Stars. And only one player captained two different teams to the Cup: Mark Messier (Edmonton 1990, New York Rangers 1994). 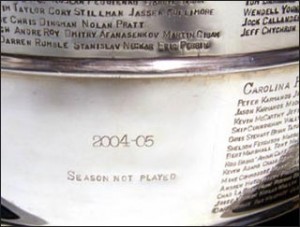 Season not completed? In two circumstances the season was not competed or played, due to serious problems. In 1919 the Spanish Flu decimated the rosters of the two finalists (Montréal Canadiens and Seattle Metropolitans), and took the life of Joe Hall. The remainder of the series was canceled. In 2005 the whole season

Fun facts. In 1905, some members of the Ottawa Silver Seven bet a teammate he couldn’t kick the Cup in the Rideau Canal. He succeeded, and his teammates had to dive to retrieve the Cup.

In 1907 the Montréal Wanderers left the Cup at the photographer’s. His mother used the Cup as a flowerpot.

In 1924 the Montréal Canadiens had to stop their bus to change a tire, left the Cup in a heap of snow and left without retrieving it. Several hours later they went back and found the Cup still in the same spot.

In 1979, when the players weren’t allowed yet to take the Cup with them, Guy Lafleur, then with the Canadiens, hid the Cup in the trunk of his car and took it to his parents’ in Thurso, QC, where he exposed it in their front yard. Later that night the Cup was brought back to Montréal. Lafleur wasn’t punished for that.

In 1984, Peter Pocklington, owner of the Edmonton Oilers, had his father Basil’s name put on the Cup. Basil wasn’t linked with the team in any way. The League had Basil’s name X’d out.

In 1996 Colorado Avalanche Sylvain Lefebvre had his daughter baptized in the Cup. Since then, several other players have done so.

The Cup has been almost everywhere in the world, even in Afghanistan.

Engraving mistakes. The engraving isn’t always flawless. There have been some mistakes, some of them even huge.

1945: Frank J.Selke is labeled as “ASS MAN” (supposedly “assistant manager”, with no references to a man’s bottom intended)

1977: Bob Gainey had his last name spelled as the same-sounding “Gainy”.

But even the teams’ names can be written in the wrong way. For example, we have the 1963 Toronto Maple Leaes, the 1972 Bqstqn Bruins

The name spelled in the most ways is Jacques Plante’s, who won many times with the Canadiens and is remembered as the inventor of the modern goalie mask. Plante has his name spelled in five different ways: besides the right one, his first name is written “Jac”, “Jocko” e “Jack”, and his last one as “Plant”! 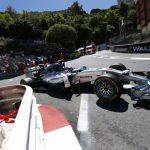 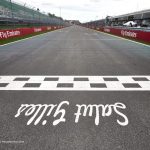