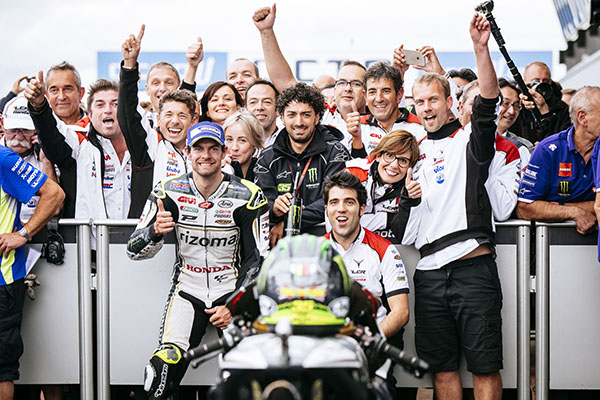 British GP: Just two weeks after having sealed a first grand prix victory, Cal Crutchlow gave the LCR Honda Team and the whole of Britain more cause to celebrate as he claimed a third podium finish of the season with second place in the British Grand Prix at Silverstone.

Starting his home race from pole position, Crutchlow didn’t get the best of starts as the event began under leaden skies. However, it wasn’t the weather but a crash which brought out the red flag on the opening lap. Both riders involved were declared OK, and when the race was quickly restarted Cal took his second chance admirably, leading into turn one.

While eventual race winner Maverick Viñales got through and escaped at the front, Crutchlow was involved in an epic battle with Valentino Rossi and Honda colleague Marc Marquez, with positions swapping on every lap. Andrea Iannone also joined in on the fun, but after fighting to get past the Brit, the Italian soon crashed out.

Lying second Crutchlow had to rebuff more attacks from the former MotoGP World Champions, with Marquez at one point clipping the LCR Honda man at around 200mph, but it forced the Spaniard wide, and out of the shout for the podium.

Crutchlow eventually held on despite a late salvo from Rossi, to take a glorious second place in front of his adoring fans, and move him up to eighth place in the 2016 championship.

“It was great to be a part of that battle today and really entertain the British crowd. I want to thank the LCR team and Honda for all the hard work they have put in in these recent weeks. We started the year with a few crashes, and problems with the bike, but it shows that all the hard work has paid off.”

“In the race I felt I gave as good as I got, it was a good battle with Marc and Valentino and I also want to say congratulations to Maverick because he controlled the race and did a superb job. Four new winners in the last four MotoGP races is something unique.”

“To stand on the podium in front of my home fans is pretty special and I’m really proud to do so. I feel in great shape at the moment and in good form and I hope that Misano can be another good race, although we know it will be difficult as it hasn’t been the best place for me or Honda in recent years. It won’t stop me trying and I will do so again next week.”