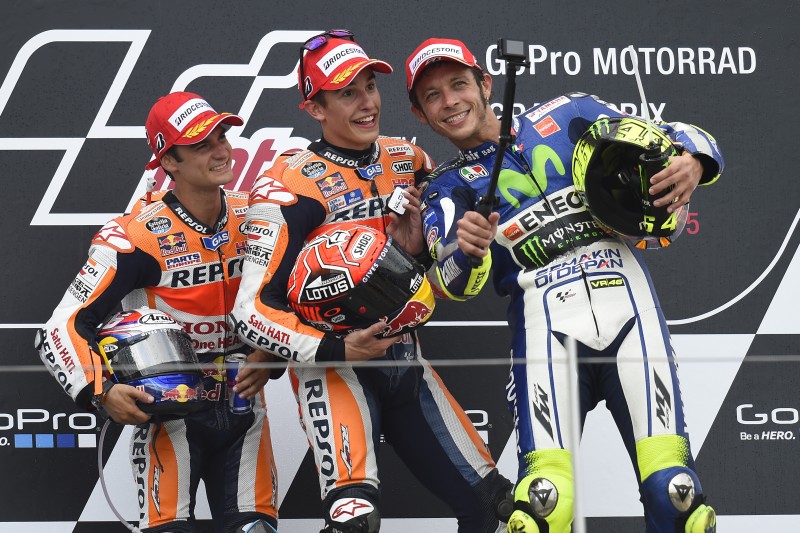 After a series of bad luck, current world champ Marc Márquez took his second victory this season at the Sachsenring Circuit in Germany. The Repsol Honda showed a strong performance all weekend and grabbed Pole Position in saturday’s qualifying in front of his teammate Dani Pedrosa and Movistar Yamaha’s Jorge Lorenzo.

Lorenzo knew, that the only way to beat Márquez was to get a good start and run off as fast as possible. The spaniard did so, but couldn’t get away from his pursuers. Márquez came constantly closer and overtook the Yamaha rider soon. His teammate Valentino Rossi joined in the fight shortly after, first overtaking Pedrosa, who by then fell back to fourth place and then Lorenzo, who battled hard to not let his teammate pass.

In the end, as so often, Rossi prevailed. The Doctor set off to catch Márquez, who surely benefited from the fight between the teammates.

For the whole race, it was impossible for anyone to get up to him. Only behind the world champion things changed. Pedrosa first overtook Lorenzo, then put some pressure on Rossi, to which the italian had to give in after some immense battle and harsh overtaking.

Now both Repsol Hondas leaded the race with both Factory Yamahas following them. Just in that order the riders crossed the line after 30 laps to go. Márquez as winner, Pedrosa as second and Valentino Rossi completing the podium. Jorge Lorenzo crossed the line as fourth, with Ducati rider Andrea Iannone behind him, who leaded a somewhat lonesome race with a distance of 10,86 seconds to Lorenzo and 2,43 seconds to his pursuer Bradley Smith (Tech3 Yamaha).

Smith finished the race as sixth, after LCR Honda pilot Cal Crutchlow tried to build up some pressure on Smith. In the end, things didn’t turn in Crutchlow’s favour, so the brit still got away with a seventh position. Smith’s teammate Pol Espargaró followed them with a distance of almost five seconds and therefore was listed as eighth.

With a gap not as huge as several other ones in this race, Pramac Ducati rider Danilo Petrucci crossed the finish line behind the Tech3 pilot. Espargarós older brother Aleix completed the Top Ten for the Ecstar Suzuki Team.

Alongside Marc VdS rider Scott Redding, who crashed out of the race during the first lap, also Ducati’s Andrea Dovizioso, Claudio Corti, who replaced the injured Stefan Bradl for the Forward Racing Team, Mike Di Meglio (Avintia) and Hiroshi Aoyama, who replaced the as well injured Karel Abraham for the AB Motoracing Team couldn’t end the German Grand Prix.

The next round of MotoGP will take place after the summer break at, friday, 7th of August at the Indianapolis Motor Speedway in Indianapolis, USA. 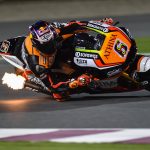 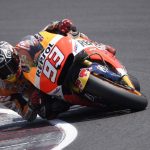