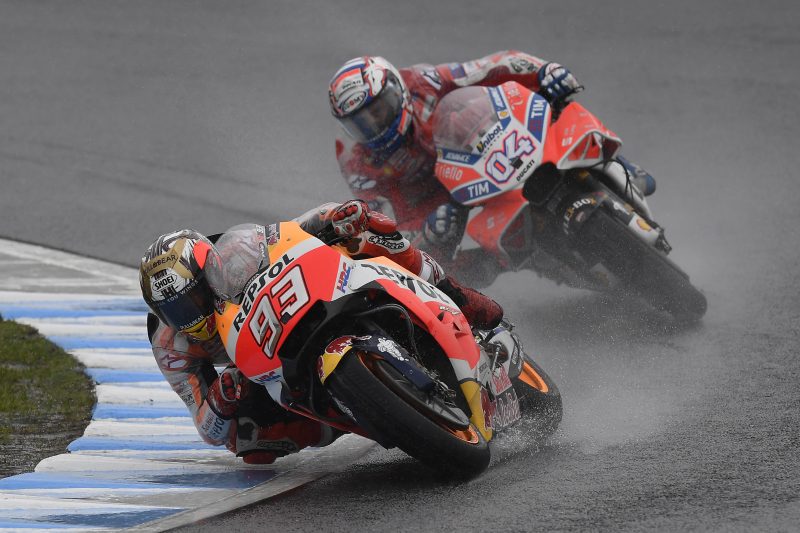 With the Japanese Grand Prix facing wet weather all weekend, the race was no exception and the tricky conditions made the epic duel between Title contenders Marc Marquez and Andrea Dovizioso even more dramatic.

The Italian prevailed over the Repsol Honda rider fighting to the last corner of the last lap after the pair closely chased and passed each other time and again after passing provisional race leader Danilo Petrucci on lap 13.

Marc began the final lap out front but a small mistake at turn 8 – where he almost crashed out – allowed Dovizioso to close in and then take the lead. Marc tried one final attack braking late into the last corner but he exited a little wide and Dovizioso won the drag race to the finish line by 0.249s.

Marc’s second place signals his 100th career podium from 165 starts (the younger rider ever to achieve this milestone), and his 61st in the premier-class. He retains an 11-point lead in the Championship before round 16 at Phillip Island next Sunday.

“Of course I tried and gave it my 100%, fighting until the last lap and the last corner. It was an amazing race with the two guys fighting for the Championship fighting for the win. Today there was a lot of water on track and for some reason I was struggling a little more than expected. I tried to push and be smooth but Andrea was very fast too for the entire race. Entering the last lap, I knew I had only a very small advantage ahead but then I made a small mistake in turn eight, well, quite a big mistake actually, and he caught me. After he passed he was very strong on the brakes and I wasn’t able to match him. In the last corner I tried again but it was not possible to pass him again. Today he did an incredible race and won but anyway I’m happy with our result as I was expecting him to be very very fast here. We scored some good points and made a good show for the fans so it’s ok”.

“It’s been a very difficult day and I’m really disappointed as there was a great opportunity to have a nice race. We have improved so much during the free practice sessions, from FP1 to yesterday, but it isn’t clear what happened with the rear tyre today in the race. At the beginning the rear tyre spun a lot and I lost a lot of traction which prevented me from opening the throttle on the straight. This issue continued to persist and halfway through the race it became worse and worse. I tried everything to make the bike work but it was almost impossible to ride in these conditions. I lost so much time and when I finally dropped out of the points I took the decision to retire, rather than crash. With so much water on track I didn’t expect to have problems with the extra soft rear tire and in fact Petrucci used the same one and he ended up on the podium. We will study together with Michelin the data and try to avoid it from happening again.” 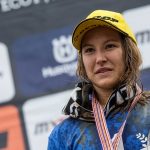 Kiara Fontanesi to line up against the men in October testMotor Racing, Motorsports