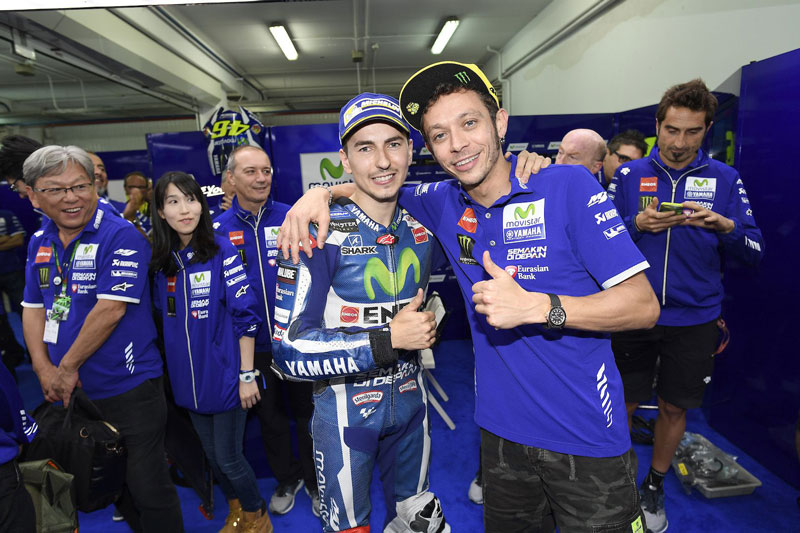 Teammate Valentino Rossi gave the Spanish crowds an action-packed 30-lap sprint at the Circuito de la Comunitat Valenciana Ricardo Tormo as he fought hard to hold off the competition, taking fourth over the line.

After a perfect qualifying session in Valencia yesterday, Lorenzo arrived at the circuit this morning feeling confident about his pace and it showed in the opening laps.

The Mallorcan stormed into the first corner to take the holeshot before creating an over 0.6s gap to the riders in his pursuit. He was the only rider to drop a 1‘36s opening lap before getting into a consistent rhythm of 1‘31s.

As his teammate got into a heated battle with Andrea Iannone and Marc Marquez for second place, it was a flawless but lonely ride for Lorenzo. The home-hero maintained an advantage of more than four seconds over his closest rival for most of the race, but decided to slow down his pace in the final stages to end his Yamaha career with a textbook win and a 1.185s margin. Lorenzo‘s run-away victory secured him third place in the Rider Championship standings, highlighting his protagonist status.

Rossi also had a good start from the first row on the grid and slotted in behind Maverick Viñales after riding side-by-side through the first corners. He took a few laps to heat up his tyres before turning up the pressure on the Spaniard on lap four. Not wanting to let the front riders escape, Rossi slipped past him in turn 14, all the while being followed by Marquez.

The nine-time World Champion next set his sights on Iannone and it didn‘t take him long to tag onto the back of his compatriot. What followed was a sensational battle for second place that lasted over 24 laps. Rossi‘s first attack on lap six was successful, but he had to let Iannone past over the line. The Italians then further delighted the race fans at the eighteenth and final Grand Prix of the season with brilliant scraps, swapping places on many occasions.

With Marquez getting into the mix with twelve laps to go, proceedings intensified even more. In turn 2 Marquez overtook Rossi. The Doctor bided his time in the last eleven laps, ready to pounce when the opportunity arose. Over the last seven and a half minutes, as Marquez started to get away, he tried to take over third place from Iannone, but their fight lost him valuable time. With two laps to go Rossi had a final try at securing a place on the podium. Though he was unable to make it stick, he ended up taking valuable points with a hard-fought fourth position, finishing 7.668s from his teammate.

With today‘s results added to the riders‘ scores, Rossi ended in second place in the Rider Championship standings with 249 points. Lorenzo claimed third in the overall rankings with 233 points. Their achievements combined give the Movistar Yamaha MotoGP Team the 2016 FIM MotoGP Team‘s Title with 482 points and a 28-point advantage over the team in second place.

Tomorrow the team will enjoy a well-deserved day off before they kick off the two-day first official pre-season IRTA test of the 2017 season on Tuesday November 15th in Valencia.