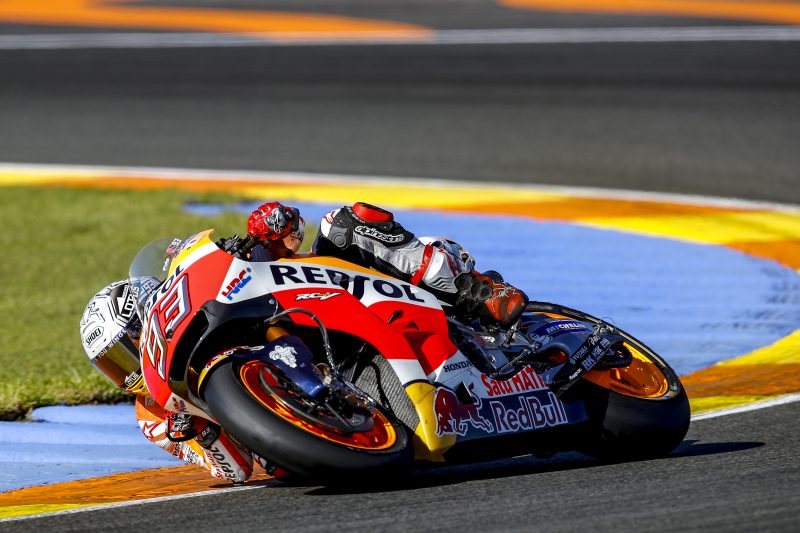 On the second and final day of the Valencia test, Marc Marquez took to the circuit around 10:20 a.m. local time and made the best of the fair weather conditions to complete a busy test schedule. Marc decided to not try the new front Michelin tyres and instead worked to better understand the new engine, also completing two long runs to find a good base setup. His fastest time of 1’30.171 on lap 58 of 79 placed him second-fastest on the day, just 0.196 seconds from the top.

Dani Pedrosa joined the action shortly after noon, when the track reopened after having been red-flagged for over an hour due to safety conditions following a crash by Alex Rins and Andrea Iannone. Like his teammate, Dani didn’t test the new Michelin front tyre and instead concentrated on comparing the characteristics of his current bike with the 2017 engine. His time of 1’30.686 (lap 38 of 42) put him in fifth place.

“Today was a good day. We started the pre-season better than last year, and we hope to continue to constantly progress from now on. At this track we found a good base setup and a good rhythm, and we’ll see how it goes from now. We hope to continue like this. We didn’t do a ‘time attack,’ and we also didn’t test the new Michelin front, as we eventually used all the track time available to make long exits and also a couple of 10-lap mini-long runs.”

“Today we were able to ride with the new bike a little more and further compare the characteristics. We continued to take things fairly easy physically and not put in too many laps in order to keep up the recovery, but we tried to understand more about the new bike, to see how the tyres, suspension and mapping work with it. I think there are things that are positive and other details that we’ll need to continue working on. We must take the data we’ve gathered and carefully analyze it in order to understand what step to take next with the bike.”