After Valentino Rossi’s spectacular victory at the opening round almost a fortnight ago, he and Movistar Yamaha MotoGP teammate Jorge Lorenzo head to Circuit Of The Americas (COTA) for the Grand Prix of The Americas this weekend.The 2015 season has only just started, but the first MotoGP race has already given race fans lots of action and drama to talk about. Rossi rode a brilliant race from eighth on the grid to clinch victory.The nine-time World Champion aims to continue his form at COTA, though he’s admittedly not a big fan of the Texan circuit with a sixth place in 2013 as his best result. However, he’s still excited to hit the track after his sensational opening of the season and will again be giving his all to fight for a place on the podium.Teammate Lorenzo had a challenging start to the season. He led the pack in Qatar in the early stages of the race, but later lost half his vision due to a helmet malfunction. The mentally and physically strong Spaniard will use this misfortune as extra motivation to push his YZR-M1 to the maximum once more this weekend. Last year he had a difficult race at COTA, but he looks forward to being back at the front of the field to challenge for a podium place, like he did in 2013 when he finished third.The Circuit of the Americas is a relatively new track that was constructed in 2012 and first added to the MotoGP calendar in 2013. The 5513m-long, counter-clockwise track is not typically described as a ‘Yamaha-circuit’, but has an interesting mixture of fast straights and tight hairpins that make for a lively race. With 20 corners in total, 11 left turns and 9 right turns, and a longest straight of 1,200m, this circuit can seat 120,000 fans and is sure to bring more excitement to the season.

Beginning the championship with a victory is really nice, but now we must try to be just as competitive as we were in Qatar everywhere else. Austin is not our favorite track. Although the track is very modern and I really like some corners, the two long straights are weak points for us. Our opponents are strong, but it’s also true that our bike has made major improvements. I’m happy with my feelings on the YZR-M1. We will work hard to find the best possible solution, as we did at Losail. After the victory in Qatar we are all very motivated and we are ready for another weekend. I would like to get on the podium. It won’t be easy, but we will try!”

“Qatar is in the past and we thought our result would be better, but now I’m just focusing on next race in Austin. I look forward to racing there once again, even if usually it’s not a track that suits our bike. In the past I was able to get on the podium so I want to do my best in Texas and try to keep as focused as I was in Qatar. I’m eager to race as soon as possible because I feel very fit and mentally strong. Hopefully we can do a better job than last year because both me and the bike have improved and maybe also the new tyres give us a chance to fight for the race. From my side, I’m going to push at the maximum.” 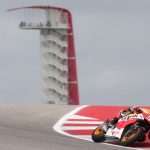 MotoGP: Marquez, Aoyama ready for the GP of the AmericasMotor Racing, Motorsports 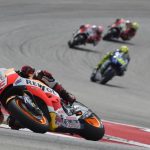 MotoGP: Marquez makes it a hat-trick in AustinMotor Racing, Motorsports