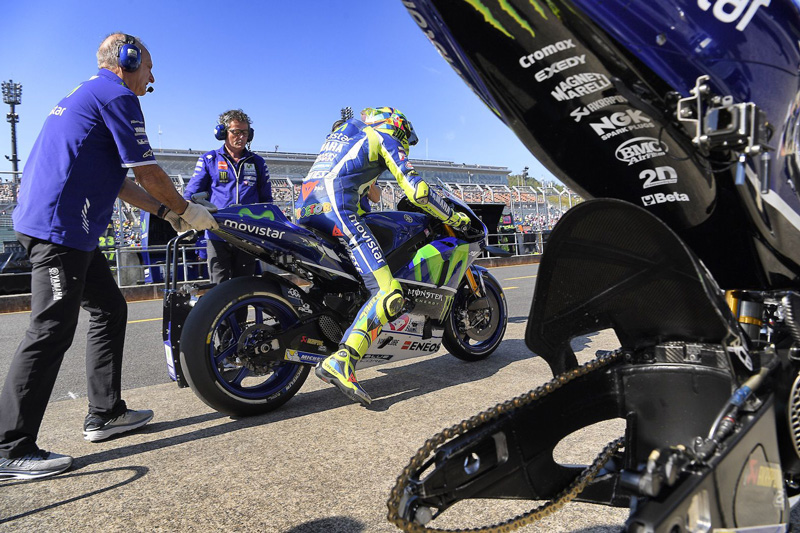 The Movistar Yamaha MotoGP team were unlucky to see both riders crash out of a promising second place at the Twin Ring Motegi track after heroic efforts of the two teammates. Jorge Lorenzo was riding impressively at the start of the 24-lap sprint and was defending his position until a crash at turn nine meant the end of his challenge. Earlier on in the race, pole-setter Rossi also suffered an unfortunate premature halt to his strong pursuit of the lead in turn ten.

Lorenzo had a good start to the 24-lap race when he launched from third on the grid to arrive at the first corner in second place, passing his teammate. He immediately also overtook Marc Marquez in turn two, who had snatched the holeshot into turn one, to take over the lead.

With a feisty fight ensuing between Rossi and Marquez, Lorenzo put his head down to increase his advantage to over 0.6s, but the two chasing riders were not out of the race yet. The first attack came from Marquez on lap three. Lorenzo spurred on his Yamaha to prevent his compatriot from clearing off at the front and was followed closely by the Doctor. Lorenzo had to let his teammate pass on lap six but regained the position when Rossi crashed out of the race.

With Marquez too far ahead, Lorenzo focused his attention on defending his second place from Andrea Dovizioso, who arrived at the back of his Yamaha with five laps to go, but the Mallorcan‘s quest for a podium ended when he crashed out of the race in turn nine.

Rossi had a good start from pole, but had to let Marquez and Lorenzo pass going into turn one. What followed was a flurry of activity on the first lap as the Italian scrapped with Marquez and Aleix Espargaró. Completing the first lap in third place, Rossi refused to give up and cleverly bided his time whilst following Lorenzo and Marquez, to take second from his teammate five laps later. He was chasing the victory and kicked up the pace a nudge until he lost the front end in turn ten on lap seven, ending his race prematurely.

After today‘s unexpected race results, Rossi and Lorenzo hold second and third place respectively in the championship with 196 and 182 points. Yamaha holds second place with 288 points in the Constructors‘ classification, 28 points from first, and Movistar Yamaha MotoGP is also chasing the Teams‘ title in second place with 378 points in the rankings.