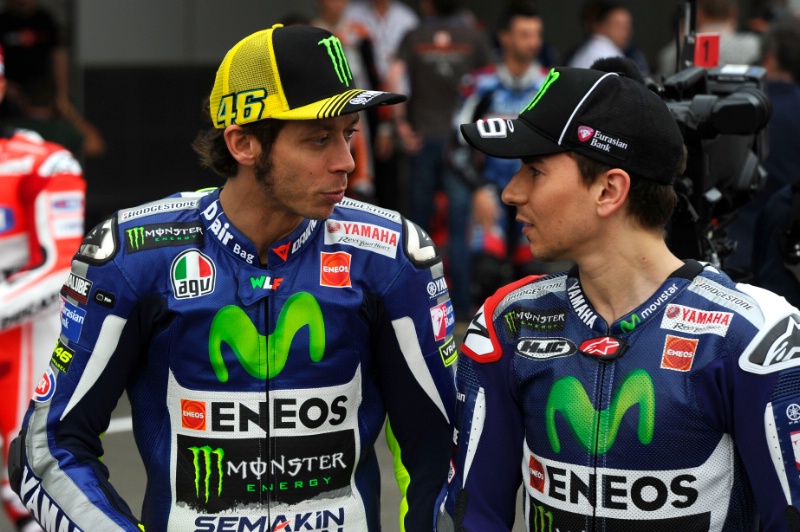 In the aftermath of one of modern Motorcycle Racing’s darkest pages, it is hard to put together the pieces of a puzzle shattered several weeks ago. For every and each one of these pieces there is a school of thought, an opinion, a political party. Some stick to the Rossi cause, no matter what. Others are angry at Maquez, still no matter what. Some, lastly, seem to think that Carmelo Ezpeleta, Dorna and the whole Spanish crew threw up a horrible conspiracy, jeopardizing the Championship and the whole sport.

Let us make a little introduction here, never mind where I come from. I am with Valentino. I rooted for Rossi since the last turn in Valencia, because what Rossi built during this years -and during the previous years- is a fantastic adventure. A legend already. Rossi has had the uncommon ability to cross through several eras and several generations of motorcycle racing and riders, always being at the very top (let alone those silly Ducati years). There is little doubt that Valentino Rossi is the essence of MotoGP. Finally, maybe, the Doctor grew bigger than the series itself. Thousands of yellow fellows, sporting yellow caps and t-shirts with huge 46’s on each circuit any given Sunday are proof of what Valentino has achieved. Rossi, already a top notch personality in Italy’s culture of the last 20 years, is also part of that shiny sports elite capable of winning championships and hearts at the same time. As the all-time Champions, Valentino is much more than an excellent athlete: he’s an icon. He’s there with the likes of Ayrton Senna, Magic Johnson and Cassius Clay. Yes, that big.

However, with all of this said and with credit where credit is due, there is an unspoken truth we are not willing to see nor hear. It is there, in front of our very eyes, but it something unspoken of. The truth is that Jorge Lorenzo has been faster than Valentino Rossi, in this 2015 World Championship. The majorcan has scored more GP wins, more pole positions, more fastest laps, more laps ahead and better free practice lap times throughout the whole season. Of course, Lorenzo made some mistakes, while Rossi has displayed an unbelievable consistency, but this is exactly why these seasons are so long: to water down the impact of a single faux pas.

Rossi did not have the pace

Truth be told, even during the pitch-black Valencia GP last Sunday, Rossi just did not have the pace or the speed to be there with Pedrosa, Lorenzo and Marquez. He had the rhythm and quickness to score the fourth position he ultimately achieved. He was way faster than the guys in the back, but also slower than the Spanish armada up there. While Pedrosa, Marquez and Lorenzo were lapping constantly between 1’31″5 and 1’31″9, Valentino had troubles in hitting 1’32” marks. These are the facts, the cold figures. No wild guesses here. No personal opinions. This is just how the story went, in a Championship in which Lorenzo has won 7 races (while Rossi won 4), and in which the Spaniard could start from the first slot of the grid 4 times, against the single exploit of the Italian in Assen. This is not something we can leave unseen if we want to review things in an objective perspective.

By all means, Rossi had to deal with the despicable Marquez affair (the “biscotto”, as Rossi calls it), but Lorenzo has had his share of troubles too, especially at the very beginning of the year. From the linen of his helmet in Qatar, to bronchitis in Austin, from the tyre troubles in Argentina to the foggy visor in Silverstone, the Spaniard had plenty to face and nobody to cheer him up. “Excuses”, said the tifosi, forgetting that had the same things happened to Rossi, the whole Belpaese would probably have turned into a rioting pandemonium.

Make no mistake: Marc Marquez played his part in the all-Yamaha brawl and there is little doubt he does not have his share of guilt. However, it is hard for me to believe that he is responsible for every crime he’s been accused of. I do not believe, for instance, that he fought against his own Repsol Honda Team only to make Lorenzo get the title, and I do not believe the whole Andorra agreement drama we’ve been speculating of for days. What I do indeed believe is that Marquez behaved as a pampered, spoiled kid in Malaysia -for reasons unknown- passing Rossi 9 times in a single lap just for the sake of it. Not the brightest crayon in the box in this particular case, the “cabroncito”, played Icarus and thought he could fly higher the sun itself. The result, as we know it very well, has been a complete, total and gigantic mess.

It is my belief that Lorenzo would have won the Championship even without this whole Marquez charade. More important than that, he would have won it fair and square, with more credit, more honor and more respect and consideration from the general audience and from the paddock. That same paddock that, had they to bet £5 on the next World Champion back in may, would have probably placed them in Jorge’s favor.

At the end of the day, the fastest -and not the most consistent- made it to the Title. But this is motorcycle racing, and we only have one winner. From his side of the garage, and to his credit, Rossi took each and every chance he had, making the most out of every slippery, rainy, chaotic, messy, odd Sunday. It was not enough.

Because another truth is that Jorge Lorenzo has always been the unpleasant one, the petulant, surly and cocky one. And in this Jorge-centered world of his, there’s always time and space for a bitter word, for a bad joke and for a cutting remark. He could have, for example, just kept silent in the Rossi-Marquez feud, the same way Pedrosa did. He could have played it smart and safe. But Jorge simply did not, because that’s the way he is. Never mind the shiny façade: that wall in the Yamaha garage, yes, it’s still there, in Jorge’s mind. Again though, this is racing, not a popularity contest. And, mind you, Jorge is as unbelievably fast as totally unpopular.

Finally then, even if we did not like the bitter ending to this 2015 MotoGP Championship, there is something I want to make crystal clear. Since the Valencia GP there are people thinking this was all Dorna’s fault, that the Spanish organization had set this up, toying with the riders in Lorenzo’s favor. Well, this is just completely wrong. Ezpeleta, who is no fool, and Dorna know very well that Lorenzo is not MotoGP’s big ticket. Also, they know very well that Rossi alone represents more than half of the series’ income. After Valentino, their go-to-guy was Marquez, the nice boy with the big, white smile. And then this blew up. All of this. In three races, bermuda-triangulated.

The truth is that these last three races have been a nightmare for the MotoGP Championship, a hot potato nobody knew how to hold.

It’s 2016 already. And it horribly got off the wrong foot. 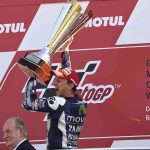 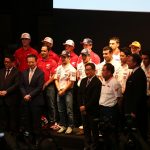