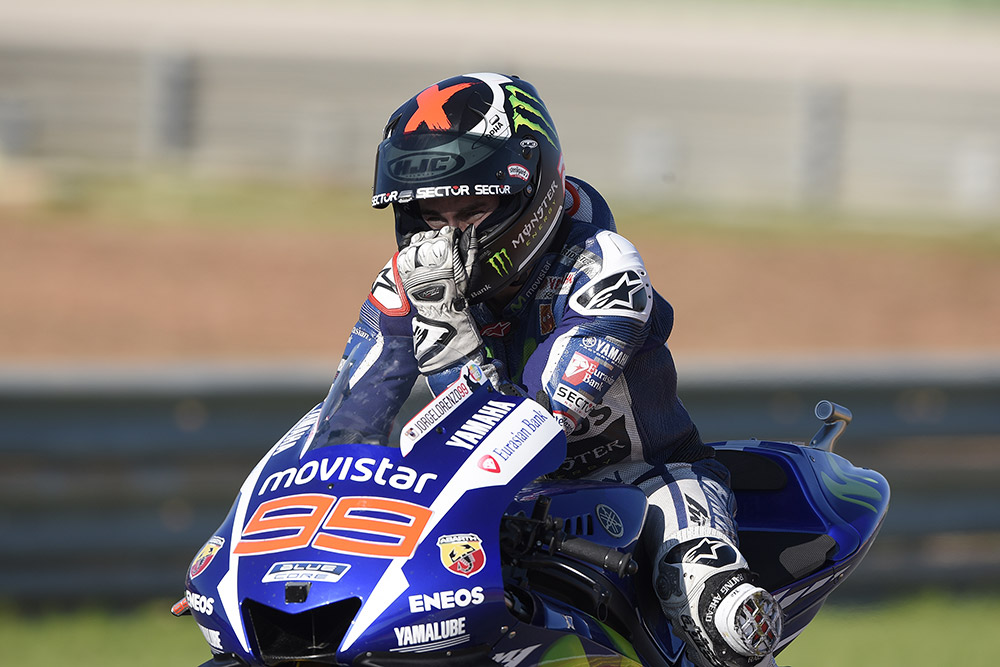 Movistar Yamaha MotoGP‘s Jorge Lorenzo proved once again his racing pedigree, taking a superb win at the final round of the season at Circuit de la Comunitat Valenciana – Ricardo Tormo as he fended off two trailing rivals to the very end of the race. Valentino Rossi followed up two tension-filled races with an equally thrilling 30-lap sprint and delighted his fans with one of the strongest performances of his career. He rode from 26th on the grid to take a superb fourth place and finished the season as the World Championship runner-up.

Lorenzo started from pole after his perfect lap during yesterdays‘ qualifying and delivered the same standard today. He had a perfect start to take the hole shot with Marc Marquez and Dani Pedrosa following. Lapping consistent mid 1‘31s for most of the race, the Spaniard slowly built a gap of over 0.7s to his closest rival, but as the race progressed towards the midway stage, Marquez was able to win some time and slowly inched closer.

Suddenly the atmosphere changed as the possible outcome of the race became wide open again, however Lorenzo remained unshaken. Despite pressure from Marquez, and Pedrosa who started to close in with seven laps remaining, he rode like a true champion, not allowing his compatriots to make him lose his concentration for even a second.

There was close to nothing between the current and the soon to be World Champion, but still Lorenzo managed to hold his rival off. As Pedrosa had a second wind, he and Marquez started to fight amongst themselves. This was all Lorenzo needed to break away for a second time. Immediately acting on the situation he pulled away slightly while going into the final lap. Marquez and Pedrosa were still following his every move, but the Yamaha rider’s pace was too fast for them to make an impression before Lorenzo crossed the line for a final time with a 0.263s advantage.

Team-mate Rossi started from the back of the grid in 26th place and rode the opening lap of a lifetime, completing the first lap in 15thplace to climb up to ninth position at the end of the third lap as Iannone crashed out. He soon closed the more than one second gap to fellow Yamaha rider Bradley Smith, while setting a personal best lap of 1‘31.820, but the Italian was unable to make his move on the Brit straight away.

Rossi let his experience do the talking and waited one and a half laps before passing smoothly and soon moved up to seventh just a few minutes later as Petrucci, who was in front of him, ran wide. Next in line were the Espargaró brothers, lapping 0,8s in front of the flying Italian. He managed to close up to Pol Espargaró with 21 laps remaining and overtook him just a few corners later, making his brother the next target.

Rossi was unable to make it stick on his first attempt but the Spaniard had no answer to the nine-time World Champion’s second pass. Dovizioso followed and was soon devoured by the Doctor, giving him fourth place in the provisional results, just five points short of a title win.

With 14 laps left to change the fate of the 2015 World Championship, Rossi now faced the task of bridging a 11.488s gap to Dani Pedrosa. He pushed as hard as he could, but the ride to the front of the field had asked too much of his tyres for him to be able to match the lap times of the top three riders. Though Lorenzo‘s pace slowed slightly as he battled the riders in second and third place, Rossi was unable to make up any ground and took the flag for the last time in the 2015 season in fourth place, 19.789s from the front.

Despite Rossi‘s brave performance, it was Lorenzo who gave Yamaha the Rider Title. Besides sealing the Triple Crown and filling the first two spots in the championship, Yamaha also gets to celebrate a strong performance from Monster Yamaha Tech 3 rider Bradley Smith. He took sixth in the race, just one spot behind team-mate Pol Esparagó, to ensure sixth place in the championship as the top satellite rider.