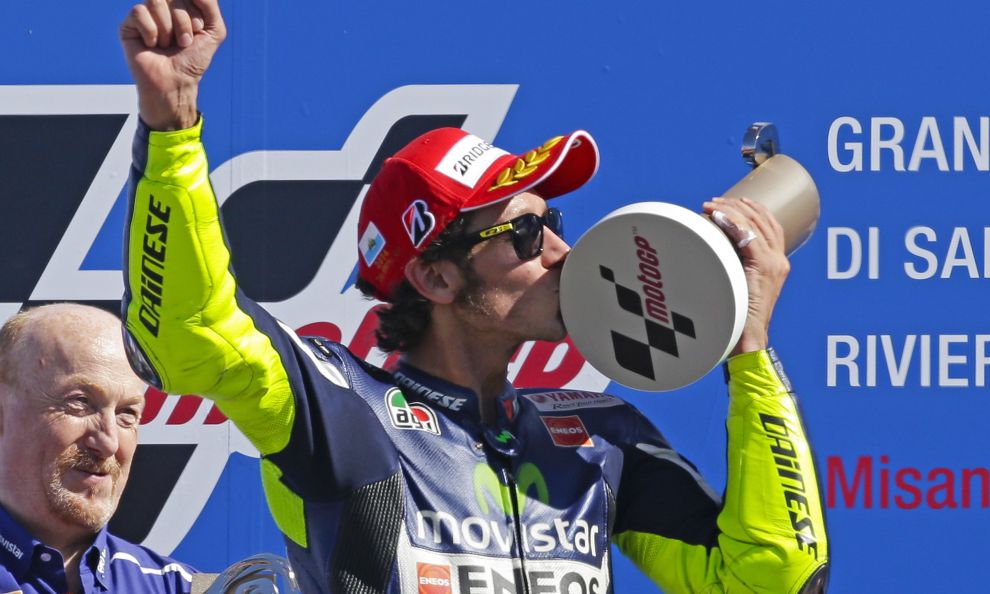 After today’s MotoGP race, the starting grid in Misano was a sea of yellow shirts. The dream of thousands of italians and MotoGP fans around the world became true. Local hero and 9-time world champion Valentino Rossi won his first Grand Prix since Assen last year. What’s more, he has won it in Misano, his home track, 1,5 seconds clear of his teammate Jorge Lorenzo.

“The Doctor“ made up a position, being second behind Lorenzo, but was quickly joined by Marc Márquez. Anyway, the Misano Grand Prix has started for the championship leader under an unlucky star. He started 4th and was able to move up to second place only, with Lorenzo clear ahead of him. With Rossi right behind him, he tried to catch up, but coming into the corner to late, Márquez lost his front tire and fell. The Repsol rider re-joined the race without going to his box, finishing 15th, which means he’s still getting one point for the championship.

Rossi continued the prosecution of Jorge Lorenzo, closing the gap between his teammate and himself. After a little fight with many overtakings, Rossi could win over Lorenzo and took the lead. The second Yamaha factory rider wasn’t able to fight with the local hero. He finished the race riding almost lonesome, with his chaser Dani Pedrosa, more than two seconds behind him.

Pedrosa himself had a poor start, leaving the first corner as 7th, meaning he lost two positions. But the spaniard fought his way through the field, but couldn’t shake of Ducati rider Andrea Dovizioso. The other local hero stayed close to Pedrosa in 4th place, but as his opponent wasn’t able to get rid of him, Dovizioso wasn’t able to pass Pedrosa.

Behind them followed the third local hero Andrea Iannone, who lost his second place to Rossi and Márquez ealier in the race. The next years Ducati factory rider, once Pedrosa passed him, was riding almost on his own, since Pol Espargaró struggled to come forward.

The younger brother of Aleix Espargaró started the race from 7th place and could only improve in one place, crossing the line in 6th position. His teammate Bradley Smith went through a similar experience, because both could only make up one position. Althrough Smith started right behind Espargaró, he had fallen back to 10th position in the meantime, but came back to finish the race as 7th.

His fellow countrymen Cal Crutchlow however seemed to be in good shape. It’s no secret that the brit has his issues with the Ducati, he is currently riding. But despite the fact he’s changing to LRC Honda next year, he still has to finish this year’s season as best as he can. Today was one of the better days, because Crutchlow achieved a 9th place, which is a quite good result compared to the ones he brought in earlier.

The only riders to crash in MotoGP were Stefan Bradl, who was riding in a good 8th position, and Aleix Espargaró, who took over the german’s place after his crash.

A lot more crashes happened in the Moto2 class. First to fall out of the race was Ricky Cardús, who seemed to had lost his front wheel. An absolute ill-timed crash, since Cardús showed a strong performance throughout the whole race. The substitute for the injured Alex Mariñelarena made his way up to third position, but was soon overtaken by the likes of Viñales, Zarco and Aegerter.

Besides Cardús, Nicolas Terol, Azlan Shah, Riccardo Russo and wild card rider Miroslav Popov crashed out of the race, but no rider was seriously injured.

But even with those five crashes, the most chaotic thing happening in this Moto2 race was an incident that included Jonas Folger. At the beginning of the race, the german ran out of the track limits and was given an penalty by the race direction. He had to fall back one position, but going past the pitlane to fast, Folger couldn’t read the demand on the signs, which were shown to him. It took a few laps until he realized what to do, but that’s when the race direction decided to give him a “Ride Through” penalty, meaning he had to pass the pitlane.

Folger, who in the meantime had passed his 7th position to his chaser, did as he was told, but still without knowing why he was getting his penalty. After riding through the pitlane, he was only able to finish the race in 19th position.

Others were luckier on this day. For example Esteve “Tito“ Rabat, who started second behind his teammate Mika Kallio and once more showed why he still is the championship leader. He catched up to Kallio in spectacular fashion, closing the gap between them lap by lap, studying his teammate. In the end, Kallio had nothing to oppose and finished the race behind Rabat, but far ahead of Johann Zarco, who finished third.

Maverick Viñales was able to keep his place, ending 4th after a battle with Tom Lüthi, who had to surrender against Viñales after all. Lüthi had started third, but already lost a few places at the beginning, struggling to get far ahead. In the end, he had to be satisfied with his 5th position.

His fellow countrymen Dominique Aegerter finished behind him, after going through similar problems. The Suter rider, who is well known for his brilliant starts, fought with Viñales and Zarco throughout the race, but the two were able to push through, whereas Aegerter seemed to be on his limit.

The Top Ten was completed by local hero Franco Morbidello, who seemed to be highly motivated, Julian Simon, an suprising Axel Pons and Takaaki Nakagami.
Pons, who probably is the rider with most crashes in Moto2, finished the race ahead his teammate Jonas Folger, which is not common.

The Top Ten in the Moto3 class were less surprising, but nevertheless the race itself was exciting. Championship leader Jack Miller started from pole position and made best out of it. He leaded the field, with Niklas Ajo behind him. The finn managed to hold both Honda factory riders behind him, at least for the first few minutes. That gave Miller to open a little gap, but soon Álex Márquez and Alex Rins passed him. After this, Ajo continued to lose positions and ended the race with a crash.

Márquez and Rins continued to chase Miller and passed him quickly. The KTM factory rider lost lots of positions, finding himself in 7th place. But he made his way up again, being third behind the now leading Rins and Márquez. Since the gap between the leading group and Miller was too big, he couldn’t catch up to them, but defended his third position until the end of the race.

Rins, after passing Miller and his teammate earlier in the race, has been the leader, until Márquez overtook him with still two laps to go. Rins, who has a very smooth riding style, studied Márquez and passed him one lap later, at the same turn as his opponent has overtaken him. After this move, Márquez wasn’t able to pass him again, which made Rins the winner of the Misano Grand Prix. With this result, Miller’s lead over Márquez has shrunk to just nine points. But Alex Rins is still able to win the Moto3 championship. He’s only 20 points behind Miller and 11 points behind Márquez.

Before this weekend it was a fight between four riders, but since Efren Vazquez has finished this race in just 10th position, it seems he’s out of competition now. Vazquez started well, but lost too many places and couldn’t even catch up to Juanfran Guevara, who finished the race ahead of him in 9th position.

Someone who could catch up was shooting star Enea Bastianini. The local hero worked his way through the field, cheered by the italian crowd, who loves the youngster. Finally he finished 5th, behind the like of Isaac Viñales. The spaniard constantly switched between being 5th , 6th or 7th during the race, but towards the end grabbed 4th place ahead of Bastianini.

Whereas Bastianinis place was celebrated, Romano Fenati’s finish won’t be a topic any italian will talk about. He struggled through the whole race and wasn’t able to finish better than 11th. Which is still better than his teammate did, since Francesco Bagnaia couldn’t even finished the race.

As miserable as the VR46 riders were, the more fortunate fellow countrymen Andrea Migno was. He jumped in to replace the fired Arthur Sissis and leads good races. This Misano Grand Prix was another one, because Migno finished 8th, behind veteran Alexis Masbou. The french, who had won his first Grand Prix in Brno a few weeks ago, fought hard with Migno, but could prevail ultimately.

Brad Binder finished ahead of them, being 6th. He used to fight for an even better place with Isaac Viñales, but had to give up towards the end. Binder, who currently rides an Ambrogio Mahindra, will be a KTM factory rider next year, teaming up with Karel Hanika, who crashed out of the race with 15 laps to go. 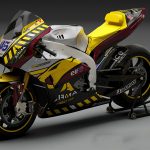