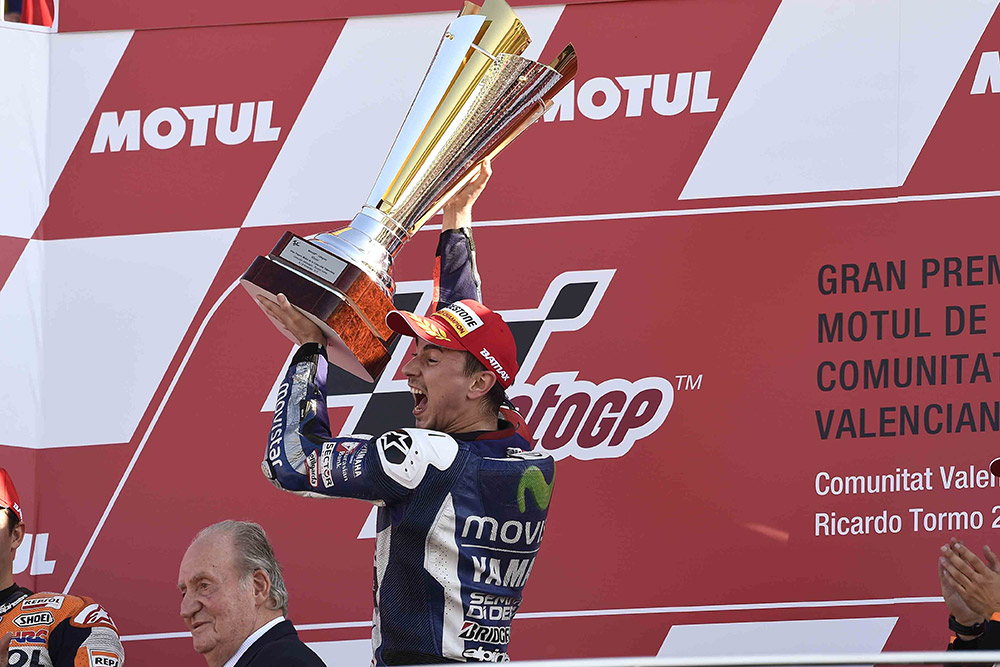 In the final battle of the MotoGP season, Jorge Lorenzo clinched his fifth world championship title. It’s the third title for the majorcan in the premiere class of motorcycle racing.

Lorenzo secured Pole Position on saturday, with a breathtaking time even Marc Marquez couldn’t top at the end of the day. Right from the start the new world champion leaded the race, with Marquez behind him.

On the opposite end of the grid, his teammate Valentino Rossi made his way through the field, overtaking 20 riders in 20 minutes. The early crash of Ducati rider Andrea Iannone and the engine problem from Cal Crutchlow, that made the brit start from pitlane, came in handy for Rossi’s chasing. Still it was a hard task. With Lorenzo leading all the way, Rossi had to climb up to second place to become world champion for the tenth time.

Rossi’s fight up was far from easy. Some riders seemed to help the italian maestro. His fellow countrymen Danilo Petrucci on the Pramac Ducati nearly waved him by. Also the still struggling Andrea Dovizioso on the factory Ducati wasn’t Rossi’s main problem. But some riders made life for the 36-year old tougher than expected. Suzuki pilot Aleix Espargaro counterattacked Rossi, but on the long straights the Suzuki GXS-RR couldn’t match the engine power of the Yamaha M1.

Therefore, with not even half of the race done, Rossi had made his way up the field, securing fourth position behind Lorenzo, Marquez and Pedrosa.

That was all the Doctor could do. Pedrosa was more than ten seconds ahead of Rossi. A gap that was impossible to catch up to. All Rossi could do was hoping that his teammate would drop back behind the two factory Hondas. But nothing like this happened. Marquez sticked to Lorenzos back wheel, without even trying to attack the five-time world champion. But with only few laps left, Pedrosa came back on the screen. With half distance into the race, the spaniard had catched up and then dropped back to the leading duo again.

But Pedrosas attack came too late. He tried a maneuver on his teammate Marquez, who immediately fought back. This costed precious time and gave Lorenzo the chance to escape even more. Marquez somehow managed to come close to the majorcan, but again wasn’t trying to get past him. For the third time Lorenzo crossed the line as MotoGP world champion, after his titles in 2010 and 2012.

Behind him followed Marquez and Pedrosa completing the podium. After his spectacular fight through the field, Rossi could only make it to fourth place, losing his tenth title by just five points. Pol Espargaro on the Tech3 Yamaha crossed the finish line in fifth place, with his teammate Bradley Smith behind him as sixth. Andrea Dovizioso ended the race as best Ducati in seventh slot. Suzukis Aleix Espargaro, Cal Crutchlow on the LCR Honda and Danilo Petrucci on the Pramac Ducati completed the Top Ten.

Alongside early crasher Andrea Iannone, also Broc Parkes, who replaced the injured Alex De Angelis for IodaRacing, Avintias Mike Di Meglio and Eugene Laverty on the Aspar Honda crashed out of the race. All riders remained without serious injuries.