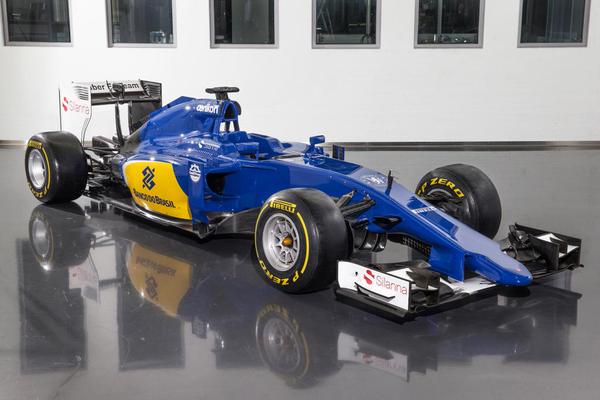 Sauber F1 Team have released their 2015 Formula One car which will be piloted by a young line-up of rookie Felipe Nasr and former Caterham driver Marcus Ericsson. The car features a new paint job, featuring the major sponsor of Banco do Brasil; who back Brazilian driver Nasr. Ericsson competed in 16 races last year in his début year in Formula One, with Nasr gaining experience thanks to 5 Friday practice runs with Williams.

The car, other than it’s striking new livery, features a new front nose design with a more rounded front edge than those seen in car launches so far. Apart from this, the car seems to be relatively similar. Sauber, however, reveal what else has changed on the C34:

‘Aerodynamics traditionally play a key role in the development of a new car. But on this occasion it wasn’t only a question of optimising downforce and drag, but also improving the balance of the car and its responses in particular through low-speed corners.

‘The greatest visual difference compared to the Sauber C33 can be found around the nose section, which is now bigger in volume and lower to the ground following further changes to the technical regulations. This has a considerable impact on the aerodynamics of the entire car: the nose and front wing play a key role in determining how the air flows around the front wheels and how effectively the central and rear sections of the car function aerodynamically. The new design of the wheel rims has progressed in a similar direction, in the interests of optimising airflow around the front wheels.’

Sauber come off of the back of their worst F1 season after scoring no points and finishing behind Marussia. Team principal Monisha Kaltenborn is hoping that the team can rediscover the form that led them to take 4 podiums as recently as 2012.

“2014 was a very disappointing year,” Kaltenborn states, “However, this is in the past, and we now focus on what comes next. We have learned our lessons and are confident for the new season.”

Marcus Ericsson will be the first to drive the C34 in the first pre-season test on Sunday and will then take to the track again on Tuesday. Rookie Nasr will drive on Monday and Wednesday.