As a motorsport marketing agency, one of the first questions we ask ourselves when we are looking at a new project is wether the sport we are discussing is popular among our target. Do people watch the events on television? Does the series get the right coverage and the sufficient media exposure? Is it possible for the average household to catch the match, or the race with ease.

The casual reader might think that the internet has made everything easy on that front: nowadays computers, tablets and even phones allow fans to be in touch with their favorite content from everywhere, anytime. People born before 1985 remember with a tad of nostalgia a time when you actually had to wait for specialized magazines to hit the newsagents or for late-night TV to provide some coverage. I personally have fond memories of my teenage years, when our major source of information was provided by Upper Deck sport trading cards.

While the internet sure is a very powerful resource, it has also caused a massive cluttering issue and posed an interesting threat for properties and championships: with such varied and almost-infinite amount of possibilities for the casual viewer to choose from, how can we make sure he or she is actually tuning in on our broadcast?

On the other hand, after the initial enthusiasm brought by the arrival of the Internet, it was however pretty clear pretty soon that the good ol’ TV set was not going anywhere. On the contrary, bigger, better screens started to appear in our living rooms and bedrooms with increasing frequency, powered by on-demand, hi-tech services like Netflix, Sky, Amazon Prime Video, DAZN and such.

Eventually, and more important than that, sport marketers and entertainment professional realized that live events had an indisputable drive and importance in the general landscape. Key elements like uncertainty and unpredictability made live matches, races and games enormously more appealing and valuable.

It is now obvious that such ambitious plan requires a massive production and distribution strategy, setup and organization. The MotoGP World Championship is a very good example of how a global sporting series is operated when it comes to building and sharing an entertainment product.

Dorna, the rights holder of the MotoGP Championship, takes care of the production and the distribution of the series throughout the whole season. The Spanish company is nothing short of a proper media powerhouse, managing the top three class of motorcycle racing along a 19-round championship across 5 continents and 14 countries. Dorna produces and distributes over 18 hours of live programming per Grand Prix, processed through 66 live feeds and more than 180 cameras that are owned, operated and sometimes developed by Dorna personnel itself.

A MotoGP Tech Lab and a MotoGP TV Compound can be found in the paddock at every round, making sure the various challenges of producing such a spectacle are exceeded and also making sure that the bigger broadcasters -such as Sky Italy, DAZN and BT- can carry out their work on site or off site.

As mentioned, more than 180 cameras operate during a race weekend to catch the action at its finest. 28 4k HDR cameras capture the track feed, mounted on 50m scaffolds and manned by 28 operators backed by 15 technicians. 130 microphones are also on track to capture the roaring of the engines and the unfortunate clanging of the numbing metal, while the famous Helicam flies over the track to provide the view from the sky.  More than 100 on board cameras are fitted to the 48 bikes. Finally, 13 RF cameras and 3 High speed cameras complete a tech park that’s able to bring to life the 66 feeds producing more than 1,266 hours of content per GP.

Graphics, telemetry, heartbeat modules and more are also taken care of by Dorna, and contribute to the stunning 14 Terabytes of content per race that’s then delivered worldwide through fiber and satellite also thanks to the support of Tata Communications.

150 media professionals work non-stop at every event to allow a detailed, tailor-made distribution. The MotoGP TV Live signal reaches more than 200 countries for a grand total of 22,208 broadcasted hours. 432 Million homes on the planet are reached via cable satellite networks while, on-site, 11 TV stations, 7 international photo agencies and 50 media outlets take care of personalized broadcasts for the most important markets like the UK, Spain and Italy.

Here is a non-exhaustive list of the most important broadcasters for the MotoGP Live Signal (i.e. where you can watch the races) in every country.

Fans with with a serious MotoGP addiction can also count on the excellent MotoGP Video Pass, the official online video platform of MotoGP.

The MotoGP Video Pass experience, which can be enjoyed everywhere from every device live or on-demand, allows the viewer to follow four video seeds simultaneously and to play around with different screen configurations for every session at every race.

Highlights, personalized replays and a stunning library of top-notch MotoGP content are also available to subscribers in 1080p quality.

While at 199,99€ per season the MotoGP Video Pass is not like super cheap (it is way more expensive than other similar OTT services like the NBA league pass and the NFL Game Pass), it also provides one of the most complete and enjoyable experiences for the avid fan or for those on the move who cannot just rely on their national TV broadcast.

MotoGP at the track

Ever been at the track? No? Well, you should, at least once. Because there’s nothing quite like the thrill, the emotion and the excitement of witnessing for the first time a MotoGP bike roaring past. The sound of the engines, the mesmerizing speed, the smell of burnt rubber and the glorious sight of the world’s best racetracks: believe me, there’s hardly a better way to watch the pinnacle of motorcycle racing than the circuit.

Plus, GPs truly are a party. With tens of thousands screaming and smiling from the stands or the infields, the flags waving, the beer kiosks and the fast food parlors, MotoGP events make for a very fun weekend all around.

It’s no surprise at all then than 80% of spectators at the circuit say they will definitely come back next year for more and, on average, come to the circuit in a group of 4.

Of course, if you fancy a more glamorous weekend and couldn’t be bothered with sitting in the grass with some noisy neighbors chanting The White Stripes’ Seven Nation Army on repeat, you might as well treat yourself to a MotoGP VIP Village ticket.

The MotoGP VIP Village represents the excellence of two-wheel hospitality and one of the world’s top sport experiences. Designed to meet the expectations of top-tier private and corporate customers, the MotoGP Vip Hospitality brings together the excitement of the action and the comfort of a five-star resort. First-row views, on-track terraces, Paddock tours and Pit Lane Walks join a sumptuous wine-and-dine experience and other benefits such as in-circuit parking for a weekend to remember. 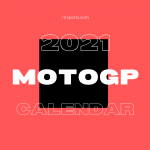 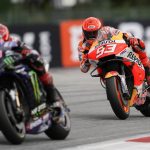