We really shouldn’t be talking about this.

But you know how it goes: you’re in the middle of a conversation with a prospect, or potential sponsor and he goes “Who are the 10 top riders in MotoGP? When it comes to MotoGP advertising and marketing, I should sponsor one of the best, right?”.

At this point, as a professional consultant from a leading sports marketing agency, you should always stick with the right answer, which is “good sponsorship really does not care whether you win or lose”. Trust the project, not the podium.

Touch be told, this answer never works. The prospect nods, says this is understandable and the whole thing makes a lot of sense. Then he stares at you and goes, “Anyway, who are the best MotoGP riders? Or, even better, who are your top 10 riders in MotoGP?”

Ok then. We really should not be talking about this, but here it goes. Our take on the best MotoGP racer in activity right now.

If you think 2020 was bad, Marc Marquez’s 2020 was on another level of bad and 2021 was not better. The Spaniard not only fractured his humerus during the opening race of 2020 at Jerez and underwent surgery. He also had a pretty bad infection, another surgery, and then another surgery to try and fix what was left of a *sigh* pretty incredible mess.

Clinical report aside, Marquez is quite possibly the greatest talent motorcycle racing has ever seen. If the man is healthy, he’s going to win this thing again and again.

Like him or loathe him, we all should hope for a speedy recovery for a very simple reason: every rider on the grid knows very well that winning is not the same if Marc is not in the competition.

On paper, one of the men to beat. On track, the man to beat. The 2020 World Champion has everything it takes to be a strong contender for years to come. He’s young, fast and terribly smart.

Plus, Suzuki have given him a near perfect bike for the job. The GSX-RR is a masterpiece of balance and holistic engineering, breezing on the straights and dancing around the corners.

While Mir has no doubt mastered his tricks, two things will be highly different in the future. On the one hand, the youngster knows he’s elite and the sky’s the limit: he’s done it once and knows he can do it twice. On the other hand, the underdog days are over and everybody will be on the hunt. It’s open season.

If we’re honest, we must admit Fabio Quartararo’s 2020 has been a bit of a two-faced creature. After a glamorous start to the season, with the Frenchman putting on a masterclass for the rest of the world to see, Quartararo failed to live up to the expectations for the remainder of the year. The situation changed dramatically in 2021 with Quartararo winning the championship hands down.

The boy’s a talent, no doubt about that. That’s why Yamaha retains him as a factory rider till 2024.
Fabio in a top team with a good bike and the right people to support him to channell his talent in a right direction are an explosive combination.

With the newfound consistency he’ll be fighting for podiums week in and week out and possibly become one of the greatest MotoGP rider of all times, in the meantime he is comfortably leading the 2022 championship.

Bit of a riddle, this Maverick lad, isn’t he? If we were to make a list of the fastest riders on the grid, he’d probably be number one hands down. Yes, we said what we said: in terms of raw speed, Vinales is maybe the fastest man in MotoGP. And yet you look at the results and see 10th, 7th, 14th.

Sure, the 2020 M1 wasn’t the best bike ever to come out of Iwata, I’ll give you that. But Maverick sometimes just did not display the best mindset either. In 2021 Maverick split from Yamaha and found in Aprilia a new team for a fresh start.

This season’s a bit of turning point for him, for you have only so many chances when you race a factory ride and the boy has already squandered some but the old form is coming back and so is consistency.

Aprilia produced a great bike in 2022 so if Vinales  starts off with the right foot, this will be one to watch.

One of the funniest, craziest, most brilliant lads in the paddock, you can’t but love Miller. Sure, a bit of a maverick, a free spirit and one that certainly does not fit the mould but -hey- this is motorcycle racing, what did you expect.

Jack’s been given the red scary thing, the official one. And although it isn’t Jack’s first rodeo on a Ducati, we all know proper Borgo Panigale is a whole different story.

The bike is going to be the linchpin here. If Ducati are willing to accept the fact that there will be bends and curves on the race track, Miller’s ready for the fight. He’s a strong, fierce rider who’s used to battle the beast.

After all, the last man to bring success to Bologna was another aussie, Casey Stoner. Maybe that’ll do the trick…But unfortunately it was not, and after two years with the Ducati Lenovo team Jack will move to KTM. I am sure we’ll see some good things in 2023

What can we say? Viva Miller.

“Frankie says relax” is a very good motto for Morbidelli. Franco is a nice, well spoken, very disciplined young man, who in the words of former-teammate Valentino Rossi only thinks about racing motorbikes and minding his own business.

Franco’s second leg of the 2020 season was nothing short of impressive. He won some, but, most importantly, he showed the world he’s ready to be there with the big boys.

The transition to the official Monster Yamaha team last year was not easy and an accident prevented Frankie from expressing himself to the full.
The qualities remain and we are optimistic for a quick return to the top positions.

Despite his chill-out, calm attitude, the on-track Morbidelli is a rabid animal going for every inch and who isn’t afraid of a bit of square-up.

Fast? Yes. A crasher? Also, yes. But old saying goes you can learn not to crash, but you’ll never learn how to be fast.

The younger of the Espargaros rode a solid season at KTM and has now landed the paddock’s favorite worst nightmare.

In 2021 he was Marc Marquez’s partner in the official Repsol Honda team, one of the most successful teams in recent history, without unfortunately shining.
In 2022 there are no excuses: if Pol is ready, focused and committed to a consistent season, he can be a threat in every race. The bad news? Well, that there are no more excuses.

When in 2020 Joan Mir played to good ol’ switcheroo and became Suzuki’s top man, everybody kinda forgot about the talent of Alex Rins. But make no mistake, the Frog has not lost his touch and is one of the most effective guys in the tarmac when it comes to taming a MotoGP bike.

He had a very strong second part of the season last year, almost securing Suzuki ah historic 1-2 in the rider’s championship. His confidence with the Hamamatsu bike is second to none.

We’ll see his name on the top step of the podium at least a couple times this year. Easy. And we  are confident that he will fare well with his new team and new bike in 2023

Talking of setting the bar high, uh? The constant comparison to Marc has always cast a strange shadow on Alex. Is he a talented rider whose brother is just too good to be true or is he a fiasco whose bloodline landed him a great job?

We’ll go with answer A. Alex is a fantastic rider. He’s a Moto3 and Moto2 World Champion and has showed impressive progress during his first year at Factory Honda. The boy’s fast, aggressive and -most important- a fast learner.

While HRC was perhaps a little “too much too young”, the LCR team should have suited him. Lucio Cecchinello’s team is highly professional and successful and should have allowed Alex to grow. Unfortunately two uncompetitive Hondas thwarted Alex’s efforts and he decided to make a change and race with Team Gresini on a Ducati for 2023. Keep your eyes open.

Good old Aleix has committed himself to Aprilia in a very old-fashioned, romantic, almost heroic way, and finally the good folks at Noale have managed to build him a competitive bike.

After a 2021 in which the acerbic RS-GP didn’t leave much room for Aleix – and it’s hard for spectators to catch a glimpse of his talent when he’s lagging behind in 17th position – 2022 is bringing great satisfaction to the rider and the team, who finally manage to win their first race, the Argentine Grand Prix, a full seven years after entering MotoGP.

The more mature Espargaro knows how to pull a couple of rabbits out of his hat. Give him a good bike and he will surprise you.

Best of the rest and a look at the past

Another question lingers though. Are the 10 MotoGP best riders also the top 10 riders in the world? Well, tough question. When it comes to racing on an asphalt track, yes, definitely. However, when mud, desert and various hurdles come into play, we can’t forget about the great riders of motocross, rally cross and trial. The top MotoGP riders will hardly win a motocross championship against Jeffrey Herlings or Tim Gasjer, or win a Dakar against Sam Sunderland or Toby Price (even if Danilo Petrucci got pretty close this year). Having said that any features about the top 10 MotoGP riders would not be complete if we did not mention some of the iconic names of the past. Valentino Rossi, Casey Stoner, Mick Doohan were for sure among the best MotoGP riders of all times and I will add Jorge Lorenzo, Kenny Roberts, Giacomo Agostini and Eddie Lawson to the list as well. 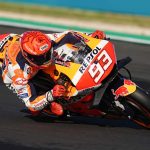