Marc Marquez takes his first victory in Argentina. Michelin’s MotoGP debut at the demanding Termas de Rio Hondo circuit was marked with an impressive win by Honda’s Marc Marquez after an eventful day at the Argentinian track. 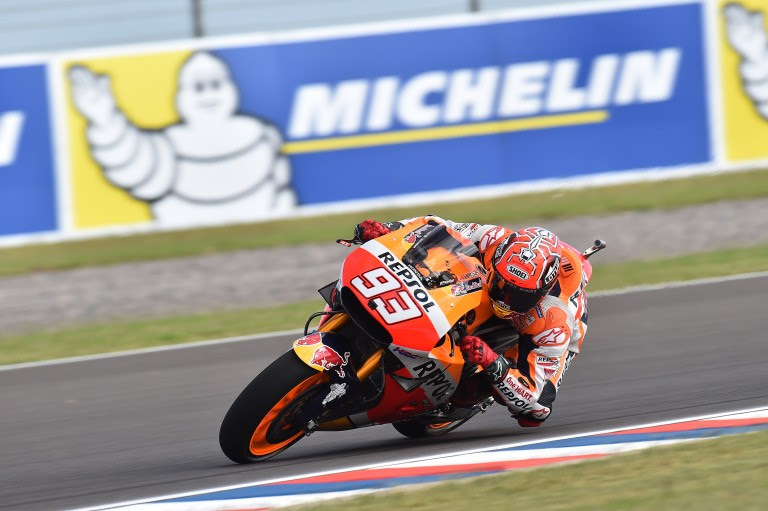 Following yesterday’s incident with Scott Redding’s rear tyre and the subsequent decision to withdraw both rear tyres from this weekend’s proceedings, heavy overnight rain meant the riders couldn’t test the extra tyre so a further decision between Michelin, Dorna and IRTA was taken to make the race a two stage event on safety grounds. The riders were allowed to use the tyres that they had tested all weekend, but a mandatory rule was made that they had to pit after nine, ten or eleven laps and change to another bike with the same spec tyres. The distance was also reduced to 20-laps to accommodate the extra safety measures. The race started under heavy cloud, but the track had dried out sufficiently to allow for some competitive and exciting racing. Pole-setter Marquez got a good start, before Jorge Lorenzo hit the front on his Yamaha. He was then passed on the first-lap by Ducati’s Andrea Dovizioso, a position he held until lap-three when Marquez took over at the front. As the first part of the race progressed Marquez and the Yamaha-mounted Valentino Rossi got involved in an interesting battle that saw the pair regularly change places. At the end of lap-10 Marquez and Rossi came into the pits to change their bikes, with the Spaniard taking the upper-hand with a quick change, enabling him to get out in front of Rossi and create a gap.

As the race continued Marquez stretched his lead, while Rossi got involved in a four rider battle with Dovizioso and his Ducati team-mate Andrea Iannone, along with Suzuki’s Maverick Viñales. With all four vying for positions it looked to be going right to the last lap, before Viñales crashed out on a damp-patch on lap-18, leaving three Italians to battle for the remaining podium places. This looked like being the case, right up until the final corner when Iannone tried a last-minute manoeuvre on his team-mate and the pair crashed, leaving Rossi to come home in second, with Honda’s Dani Pedrosa profiting from the crash to take third. Eugene Laverty on a satellite Ducati took fourth and the honour of First Independent Team Rider, with another Ducati, this time belonging to Hector Barbera in fifth. Pol Espargaro on a Yamaha was sixth, Stefan Bradl seventh on an Aprilia and Bradley Smith riding a Yamaha in eighth. Tito Rabat on a Honda took ninth, whilst the second Aprilia, ridden this time by Alvaro Bautista rounded out the top-ten. The result leaves Marquez at the top of the World Championship Classification, with Rossi in second and Pedrosa third.

Michelin now heads immediately to North America where round three of the MotoGP World Championship will take place at the Circuit of the Americas in Austin, Texas on Sunday 10th April.

“This weekend was a special one for the tyres and I completely understand what happened. For every manufacturer it is difficult to understand every new circuit, especially one with a difficult surface. We had some troubles with the tyres, plus the rain this morning, so it made everything more difficult. I think Michelin did a big effort and they chose the right decision to make two races in one, because safety is a big point. I believe in Michelin because they are working really hard and making a big effort, and I totally understand what they are doing and that they are working hard to give us the best quality.”

“I would first like to thank Dorna, IRTA and all the teams for the understanding and assistance in what has been a very challenging couple of days for us. The decision we took with Race Control with the introduction last night of the extra tyre was the right one for rider safety and the change to the schedule to accommodate another practice session was also the best solution. Unfortunately the weather intervened and we had to make further alternative plans. As always the rider’s safety is our paramount concern and we wanted to do everything in our power to make sure that this afternoon’s race went ahead without any incidents. As it happened we were treated to a very exciting race.”

“This has been a very difficult weekend for us, but it is all part of the learning process. We have to take all the information and the positives from what was eventually a good race and move forward. We now head to Austin, which is again another completely new track, but we are ready for the task ahead and we will be doing all we can to ensure a safe and competitive race for all.”