Former Formula One driver Justin Wilson is set to make his Formula E debut in the next round for the 2014/2015 season. The British driver will replace Scott Speed for one round only, with the American missing the round due to prior commitments in the Global RallyCross championship.

Justin has raced for Andretti in IndyCar as recently as last weekend, where he come home in 21st place after qualifying 6th for the Indianapolis 500; the highest qualification for a Honda powered car at Indianapolis this year.

“I’m looking forward to making my Formula E debut with Andretti,” said Wilson. “I’ve been following the Championship from the start, and it is a very interesting formula.

“I appreciate Michael (Andretti) giving me this opportunity. I know there is a lot to learn, but I am excited about this new challenge and looking forward to the Moscow ePrix weekend already!”

Wilson races in 16 Formula One Grand Prix for Minardi and Jaguar in 2003, with his best result of 8th in that year’s United States Grand Prix securing him a solitary world championship point. To date, Wilson is the tallest driver to have ever raced in Formula One, with the Briton’s height of 6 foot 4 inches hampering his early efforts to break into the sport. Since then he has raced in Champ Car, IndyCar an in Sports Car racing.

The Andretti Formula E team enter the penultimate event of the season in 6th place in the constructors’ championship, with hopes for the drivers’ championship out the window after a series of replacement drivers having been required in the wake of Franck Montagny’s suspension due to illegal substance use at the Putrajaya ePrix. The team will have raced with 7 drivers this year, with Montagny, Charles Pic, Jean-Eric Vergne, Marco Andretti, Matthew Brabham, Scott Speed and Justin Wilson all with spells in their 2 cars.

The Formula E Russian ePrix takes place on June 6th on a temporary circuit just outside the Kremlin in Moscow. Scott Speed will return to the cockpit of the Andretti car for the final event in London later that month; the series’s only double-header races. 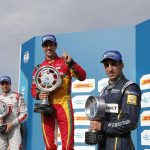 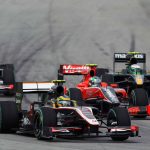