The Speed of Light

While Jorge Lorenzo takes his place back at the top during the Phillip Island MotoGP test, we are happy to introduce to you episode number 21 of our photo column “Mirco Lazzari’s Road to MotoGP 2014“, the photographic tour on the pages of RTR Sports that-through the images of the great photographer- wants to take us up to opening round of the 2014 MotoGP World Championship in Qatar on March 23rd.

One of Mirco Lazzari‘s iconic features is to offer the reader (yes, reader, to quote Barthes) an impressive sense of speed with a very peculiar use of lines and colors. In this image, the Pramac Ducati zooms in a maze of segments, blurred shapes and shadows. However, while on the outside everything flies by in a flood of gradients and geometries, the powerful machinery stands perfectly still

[icon_teaser style=”black” type=”InfoAbout” title=”Who is Mirco Lazzari” ] Mirco Lazzari was born in Castel San Pietro (BO) in 1961. His MotoGP and Formula1 pictures were first published by Grazia Neri and then by Getty. Mirco, one of the Nikon official photographers who won several international awards, has been working with RTR Sports Marketing for what MotoGP pictures are concerned. For years, his best photos have been collecting in an amazing photographic book ‘Una vita a 300 – A life in the fast lane’: you can buy the last edition on Amazon, through this link. 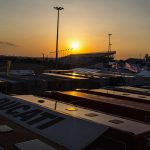 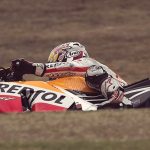