The Formula 1 weekend at the Circuit of the Americas is of paramount importance for several reasons, both sport and marketing wise.

From a sporting point of view, Formula 1 has several motives to celebrate. First of all, the rivalry between Max Verstappen and Lewis Hamilton is offering the circus one of the most exciting and electric world championships in recent decades, thanks also to an interesting midfield with very level values. Secondly, and probably also thanks to the show on the track offered in recent months, the turnout figures at the Circuit of the Americas were nothing short of astounding: 400,000 spectators at the track over the course of the race weekend. Never happened in a US GP for F1 before.

However, it is probably in terms of sports marketing that the greatest four-wheeled competition must find their reasons to celebrate. The ambitious relaunch plan organized by Liberty Media is now showing the first evident results both from a digital presence and brand development point of view. This Formula 1 is evidently rejuvenating and projecting towards the future, taking off the dusty baronial jacket of the “pinnacle of motorsport” to put on more friendly and transversal clothes.

Winking and sparkling graphics, cleverly managed social media activities and lots of online and offline activations are rapidly taking the main open-wheel series towards a new era, with a younger and wider audience and a promotion plan that blink with more malice at a modern, saucy, and colorful communication, definitely fresher and more modern. A new generation of young, cool and talented drivers (from Norris to LeClerc, from Russell to Verstappen himself) that is bringing some fresh air to the paddock; they are kids of this time, digitally savvy and therefore  keen in spending themselves via digital and social media for teams and sponsors, while maintaining the highest level behind the wheel.

However, if Europe has always been very responsive to everything related to the four wheels Championship – and Formula 1 has an easy game in some historic nations such as Italy, Great Britain, France and Germany – the same cannot be said for the United States.

America has always been the big unknown for the Circus.  Formula 1 has always raced in the States without ever really breaking into the heart of an audience accustomed to different sports and entertainment. American football and baseball (sports that have had little luck in the old continent) are the pillars of American entertainment; motorsport itself is profoundly different in the US, where races in the Ovals and the great classics such as Indianapolis and Daytona still dominate the scene. It has always been very difficult for F1 and any other motorsports to find a strong positioning into Americans’ heart.

NBA and Formula 1: merging platforms to expand the fanbase

All this considered, it is important to understand and read the partnership that the NBA, the American professional basketball league, and Formula 1 have formed at the American Grand Prix.

Numerous initiatives have been launched in collaboration between the two championships and the presence of details borrowed from the American basketball has been very strong throughout all the events. Just think about the legendary Shaquille O’Neal delivering the winner’s trophy in a very American style ceremony, very different from what F1 is used to have in Europe.

Among many other things, we must talk about the promotional activity that saw the 30 NBA teams lend their look to dress – even virtually – the new generation of F1 cars. A beautiful activation on social media and a shooting competition between F1 drivers and NBA players with a prize to be shared with a  charity program.

Folkloristic and color side excluded, these are all activities with a strong sports marketing ratio and with a clear objective: to expose Formula 1 on other sport platforms, very familiar and loved by American fans, to increase the brand’s awareness and above all to create that bond that can generate new audiences in the long run.

Playing by the books, this type of cross-platform operation (i.e. working between different sport platforms – in this case by audience) has two types of underlying reasons:

The goal of the business, obviously, is to grow the Formula 1 product in the United States, trying to leverage a highly successful and loved league.

NBA and Formula 1: to raise awareness

Raising the awareness of F1 in America is obviously the simplest, but also perhaps the most important goal of the partnership between the NBA and Formula 1. As crazy as it may seem to an European – who has already gone through the brand awareness phase and has already positioned F1 as a “top of mind” brand – not all of the North America knows about Formula 1.

We cannot forget the highly multifaceted and differentiated profile of the American audience, much more stratified and diversified than the European one in terms of background, traditions, culture, and consumption habits. In short, in such a large and diverse country, the first point on the agenda is certainly to pass on the knowledge of the brand and its awareness.

In this sense, the NBA, its players, and its teams are the perfect way to achieve the objective; one cannot ask for more. In fact, American basketball shares with baseball the second step of the podium as the most loved sport in the States (the first is, without a shadow of a doubt, American football).

The National Basketball Association is an industry worth about $ 9 billion in revenue per season, with 30 clubs located in 22 states of the nation. Last year’s finals between the Phoenix Suns and Milwaukee Bucks hit about 10 million spectators per game; quite “interesting” numbers, even if a bit disappointing compared to the more than 20 million per game in 2017 when we had on court the Cavaliers lead by LeBron James and Stephen Curry’s Warriors.

To take advantage of the social media of the league, teams and even individual players to convey content related to the world of Formula 1 is the quickest but also the most effective way to expose the discipline to the very large audience of American basketball and to put the F1 logo in front of as many eyes as possible.

If popularity is the determining factor, why not using the NFL, the American football league, that dominates the US sports scene, instead of the NBA?

There are probably two reasons behind this choice. On one hand, the NBA is starting the new season in these days, with great media buzz around the restart of the championship. What a better timing then to exploit the momentum. On the other hand, there is probably the limited popularity of the NFL championship for European and Asian audiences, who are likely to have little or no interest in the football content and protagonists. NBA is absolutely more popular and followed by this audience.

NBA and Formula 1: an association of values

As we have already written several times on this blog, in the world of sports marketing and sponsorship, the association of values plays a leading role. When you bring a brand close to a successful team, that team will project its values, qualities and peculiarities, and those of the overall discipline, onto the brand. This is exactly what Red Bull has always done form the very beginning, associating its energy drink with adrenaline-pumping, young and “extreme” sports, thus positioning itself as the extraordinary, popular, and cool brand it is today. But it is also what thousands of brands do every day while investing in sports sponsorship, on every field, track, and arena on the planet.

This is the same reasoning that we find behind a partnership like this one between the NBA and Formula 1; we have over simplified it for the sake of brevity, but it  finds solid scientific foundation in behavioral psychology studies.

We must imagine Formula 1 a bit like an empty box in the eyes of the American spectator. The circus did not have the time – but above all the tradition – to build up a sufficient amount of associations and characteristics to clearly identify the product in the mind of the US public as it has happened in Europe. Bringing the discipline closer to a sport that, on the other hand, is deeply rooted in the US culture, is the first step to form a cognitive but also emotional idea of Formula 1.

NBA is an international, modern, rich, culturally diverse and wonderfully inserted in the socio-political context, league: it owns, in short, a first-rate positioning in the eyes of the American public. It is also a league whose leadership, first with David Stern and now with Adam Silver – a role the Americans call a commissioner – has a long-term project that it manages with integrity and professionalism. In short, an excellence.

Bringing NBA next to Formula 1 means enriching the latter with the values and qualities of the former, filling that empty box mentioned at the beginning of the paragraph. It is quite evident that the results of these operations are not and cannot be seen in the short term: those who expect that thanks to such an initiative F1 has gained thousands of US fans, fail to grasp the sign of a very long-term strategy. In an era in which the choices on entertainment are countless thanks also to technological evolution, fans must be gradually approached to the enjoyment of sport and its culture and understanding.

The partnership between Formula 1 and the NBA must be well contextualized, without a shadow of a doubt. On one hand we should not think that the conquest of America is guaranteed by a shooting competition between drivers or a hall-of-famer who delivers the trophy. But on the other hand, we should not make the mistake of misunderstanding these activities as “funny act” for its own sake.

The truth is that the US is not an easy country to interpret and a proof of this is the ever-singular opening moment of the Grand Prix, with country singer Joshua Ray Walker singing the national anthem as war helicopters whiz over the skies of Austin, the Dallas Cowboys cheerleaders wave pompoms, a skydiver flies the star-spangled banner from above and a drover frees the eagle symbol of freedom.

Thinking of entering such a market with a straight leg is something impossible. And Stefano Domenicali and the men atLiberty Media know it well: those who have tried to do it in the past have failed. Now, as America prepares to see F1 return to the Miami track in 2022, a cautious approach strategy may be the most appropriate.

To do so, F1 has chosen to be accompanied for a part of its way by one of the most successful American leagues in the US and in the world. It’s not the definitive move, of course. But it’s absolutely a good first step. 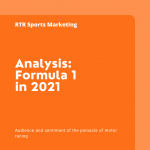 Formula 1 in 2021: who is watching and what does the audience thinkFormula1, Marketing Sportivo, Motorsports 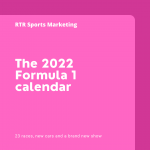